The Mouse House: Snow White and the Seven Dwarfs Review

Now that Mermaid Month is over I’d like to thank all my readers for their support. While on the subject of The Little Mermaid we all know that Mermaid has earned it’s place in animation and film history for bringing back the dying art form of the animated film as well as the magic and quality of Disney’s film legacy. But this film was actually the third (4th if you count Fantasia) time that’s happened. Cinderella being the second by saving the Disney company from financial ruin. The first is one of the biggest gambles in film studio history as well as the film that launched Disney to the stratosphere of super stardom and changed popular culture forever: Snow White and the Seven Dwarfs.

The first true animated feature film (the Argentina animated movie isn’t worth mentioning) is a simple story about a maiden who is the “fairest of them all” named Snow White and she is marked for death by her jealous stepmother: The Evil Queen. After the huntsman (the Queen’s would be assassin) fails to kill the girl out of guilt he tells her to run away and hide. Snow White then finds a cottage in the middle of the woods and decides to hide there. The owners of the cottage are the Seven Dwarfs their names are: Doc, Grumpy, Happy, Bashful, Sleepy, Sneezy, and Dopey. They find the princess in their cottage and welcome her into their home (except Grumpy of course). The Dwarfs become a merrier bunch and become better people because of her kind personality.Â  The Queen finds out where Snow White is hiding and transforms herself into an old hag pretending to sell apples. Snow White eats the Poison Apple and is put into the “Sleeping Death”. The Dwarfs try to save her, but it’s too late and the Evil Queen is killed during her getaway. The seven little men are heartbroken. Then the prince shows up and kisses Snow White and she comes back to life. The Dwarfs are happy and Snow White lives happily ever after with her prince.

This story is classic and timeless. I don’t care what anyone says. When we watch older films we need to watch them in the historical context of the time period the film was made, in this case the mid 1930s. Obviously when we apply modern standards to this film it’s going to not hold up as well, but back then for an animated film to be 80 minutes long and to have this degree of storytelling and character sophistication was ABSOLUTELY ASTOUNDING!!!!!!!!!!!!!!!!!!!!!!!!!!! There’s a reason why this one of the highest grossing movies of all time (adjusted for inflation) and it was because people were in awe of how damn good the story and characters were. 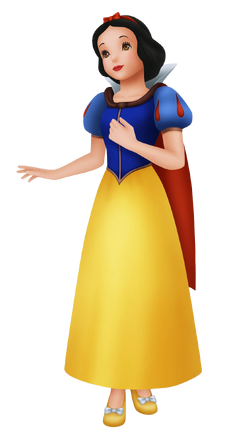 The very first Disney princess. Her kindness and elegance are legendary, even by Disney princess standards. Also fairly pretty. She is the character that the entire film and story revolves around. Apart from her kindness and her elegance there isn’t really much to her character (again putting things to historical context she was and is a great character). What she does do is actually the greatest thing that could have happened to this film. Develop the Dwarfs as characters.

The real heroes of this film. Doc, Grumpy, Happy, Bashful, Sleepy, Sneezy, and Dopey. I’m going to focus more on Grumpy because he’s the one that goes through the most development. The Dwarfs are just simple minors, and Grumpy was a complete asshole. When the Dwarfs meet Snow White they are kind enough to let her stay and hide from the Queen. The more time the Dwarfs spend with her the happier they are and their lives are given more fulfillment that working in the mine cannot do. Grumpy hates Snow White at first, but when he goes off to work she gives him a kiss on the head. Grumpy’s reaction is one of the film’s most beautiful moments. We learn that he’s the one that cared about her the most. When the animals try to warn the Dwarfs Grumpy takes Sleepy’s suggestion of what the animals are trying to tell them and he’s the one that leads the Dwarfs to get back to the cottage to save Snow White. When Snow White is in the coffin he’s the one that cries the hardest (next to Dopey of course). This excellent development of the character is what makes Grumpy one of my favorite characters. This change is absolutely beautiful and heartwarming and by 1930s standards it made grown men cry.

I’m skipping the Prince because he’s a plot device and he’s lame as all hell! NEXT!!!!!!!

THE EVIL QUEEN/ THE OLD HAG:

The very first true Disney feature villain. This is actually a very well developed villain. Her goals may be different, but what she represents and how she carries out her plan is what’s really well done. She represents the negative human quality of “vanity”. Her vanity and jealousy proves to be her undoing and pays the price with her life. One of the things I love about this character is the pure irony of how she carries out her plan. In order to become the most beautiful woman in the world and kill her competition she needs to make herself the ugliest woman in the world (the hag). She dies ugly. She dies with her outside matching her inside, her ugly face goes hand in hand with her ugly heart. Absolutely GENIUS!!!!!!!! That is an awesome job by Walt and the storymen.

Although this film is a far cry from the lovely art direction of future Disney animated films this one has still got it. The use of the muliplane camera was a welcome addition to add more depth and dimension to the backgrounds. The voice acting is very well done and the emotion that the actors as well as the animators brought to the film made people cry.

This film’s music is legendary. With songs by Larry Morey and Frank Churchill the songs of the film have gotten to the point where we can hum a few seconds of these songs without even thinking about it. Let’s take a look at these great songs!

These two songs are simple and sweet. It establishes Snow White’s kind nature and the “drive by” date (literally) that Snow White has with her prince.

WITH A SMILE AND A SONG

This is another nice song. I don’t think it has any relevance to the story other than just introduce the animals. I think the real reason this song was put in was more of a structural one. I believe this song was written in order to lighten the mood and calm the audience down after the scary scene that preceded it.

WHISTLE WHILE YOU WORK

One of the more famous songs from the movie. This song is not only the introduction of the cottage it also establishes Snow White working together with the animals and the rapport that they have with each other. This establishes a major change in the lifestyle of the Dwarfs too. It’s this change in sanitation where the Dwarfs begin their development.

A great introductory song for our heroes! The song establishes their daily grind and also a subtle hint as to how this is going to change knowing that Snow White is already at the cottage. My absolute favorite song from the film. Possibly the most well known song from the film.

This isn’t really a song as much as it is a gagfest with the Dwarfs. The reason I included it was it is a huge step in the Dwarfs’ development. The Dwarfs are not used to being told what to do, but they do as Snow White asks when she orders them to wash their hands (except Grumpy). This is the first official step to the Dwarfs adjusting and becoming better people because of her presence.

This is a fun little song that shows all our leads just hangin’ out and having fun together. It shows how the Dwarfs have come to accept Snow White and that they truly care about her.

SOMEDAY MY PRINCE WILL COME

The classic “I want” song that started it all. Even though this song’s successors have surpassed it it is still a magical song. You feel at ease while listening to it. What I love about this song is the fact that even though it’s about Snow White’s motivations as a character the film focuses on the Dwarf’s reactions. This shows how Snow White has effected the Dwarfs and even Grumpy shows a little of his more caring side behind a feeble attempt at calling the song “mush”.

This is a classic movie. One of the most influential and greatest movies of all time. Media and Pop culture as we know it would be unfathomable without this film because with no animated films animated shorts would have died out sooner than they eventually did. Without animation in the minds of the filmmakers then there’s no computer animation and then no CGI. If there’s no CGI then pretty much the big movies of the last 10 years would never have been made and not to mention Disneyland and every other sophisticated theme park wouldn’t have been built. Plus if there’s no CGI we wouldn’t get those amazing graphics for video games like Mass Effect and Final Fantasy XIII (I like FF XIII SHUT UP!!!!!! IT’S A GOOD GAME WHAT’S WRONG WITH YOU PEOPLE????????!!!!!!) Sorry about that rant. Anyway this is one of the most important movies of the 20th century and it’s classic story, great characters are more than enough to give this film great praise!

VERDICT: 5 poison apples out of 5

Stay tuned next time when I take a look at another film that can be considered on of the greatest movies of all time: FANTASIA!!!!!!!! See you then!