Season 3, Episode 20
The One with the Dollhouse

Plot mmary-Rachel regrets making a date for Chandler with her boss, Joeyâ€™sinterest in Kate intensifies, Monicaâ€™s and Phoebe compete over dollhouses.

Funniest Line-â€œHey, I’m not interested in her sweater, alright? It’s what underneath her sweater that counts.â€â€¦.Joey

Nitpickof the episode-Ok, I am no girl and obviously have never had a dollhouse but what is the point of having one if all youâ€™re going to do is make it pretty? At least Phoebe has a little imagination.

Standout Character-Joey because, like Phoebe says, itâ€™s great to see him feeling sostrongly about Kate. Itâ€™s the first sign there is more to him than being a womanizer

Final Thoughts-Phoebeâ€™s dollhouse was a cute moment. And that was about all the cute moments in this one. It isnâ€™t a bad episode per se, some of the stuff with Rachel and Chandler were funny. The dollhouse story is so dry they had to stretch to make it fit an entire episode, and what was Monicaâ€™s story turnsinto Phoebeâ€™s. And there is never any resolution to what happened with Monicaâ€™shouse, did she ever let Phoebe play with it? Joeyâ€˜s story picks up from thelast episode and this is clearly just a continuing of this annoying arc. We do get a little insight into Chandler and finally meet Joanna. Why is she so mean to Sofie? Not much to say on this one, itâ€™s decent but not great.

Season 3, Episode 21
The One with the Chick and a Duck

FunniestLine-â€œDo you guys know how to get a chick out of a VCR?!â€â€¦.Chandler

Syndication Edit-One of the dumbest syndication edits, the episode loses the opening scene where Monica on skates crashes into Rachel. This makes it confusing how Rachel was injured in the first place! It also explains why Monica is on skates later. Dumb cut! Also The tag is also cut where the guys give the chick a bath. Did this episode run real long?

Final Thoughts-I guess they needed to fill an episode before moving Joeyâ€™s story on so they figured they would have him be depressed and buy a chick. This is so not funny although the chick and the duck would grow on me. Yeah the argument is funny where they sound like a married couple. The real story in this one is Ross and Rachel, for the first time you can tell they both still have feelings for each other and that makes their story here work. As for Monica and Pete, back to the same old drill except Monica finally decided to like him at theend. Oh and for some reason Chandler starts sporting a goatee in this and the next several episodes.

Grade=B,Ross and Rachel make the episode

Season 3, Episode22
The One with the Screamer

Plot Summary-No one believes Ross when he insists that Rachelâ€™s new guy is insane.Joey falls in love with Kate but she gets a job in LA. Phoebe stays on hold for days.

Funniest Line-â€œYeah, and at the end of the play, he got up and just started to bang his hands togetherâ€â€¦.Chandler

Nitpickof the episode-Um Phoebe, ever heard of hanging up and calling back??? Her story is so bad, where do I begin? And why didnâ€™t someone ever pick up, I have worked in call centers so this doesnâ€™t make sense

Standout Character-Joey, I hated the storyline but canâ€™t fault Matt LeBlancâ€™s acting through it

Syndication Edit-The tag is longer, Chandler asking if the duckÂ  can go with them, all of Peteâ€™s dialogue

Final Thoughts-First the bad. Phoebeâ€™s story is beyond awful! She sits on the phone for entire episode? Really? Ok, now the not as bad. Joeyâ€™s story finally ends and, big shock!, it ends with Kate leaving town and never seeing Joey again. What a stunner. And that final scene with the spaceship was STUPID!!! Just my opinion but it just made no sense and doesnâ€™t work. The story of the screamer is decent, largely due to Ben Stiller who is great in this episode. So great he almost steals the show.

Grade=C+,AWFUL Phoebe story and itâ€™s not good when the cast is outshined by the guest star

Season 3, Episode 23
The One with Rossâ€™s Thing

Plot Summary-Ross seeks help for a mysterious skin condition; Monica thinks Pete is going to propose to her, Phoebe dates to men at the same time

Funniest Line-â€œYou know when girls sleep with guys with weird things on their body, they tell their friends about it.â€â€¦.Monica

Nitpick of the episode-As someone who has had the pleasure of having several doctors staring at you, I know how Ross felt in that scene where it happens to him and promise I do not find that funny. At all.

Standout Character-Phoebe, is it me or is this the first decent story she has had in a while?

FinalThoughts-Phoebe finally gets something decent to do, and it is kind of unique to switch the clichÃ© where the character finds out that the person they were with was also seeing someone else. Here itâ€™s Phoebe seeing two people and the guys are both good men. It could make her look bad but she pays in the end. Rossâ€™s story is stupid and thatâ€™s all there is to say about that. Itâ€™s nice to see Monicaâ€™s story start to wrap up and we finally learn that Pete is crazy, which willbe expanded on his final episode. Jon Favreau is a good actor and director, but I hated him in these episodes. By the way the â€œcall momâ€ gag is one of the most forced gags ever.

Season 3, Episode 24
The One with the Ultimate Fighting Championship

Plot Summary- MonicaÂ  learns that Pete wantsto become the ultimate fighting champion, Chandler has a problem with his boss, Phoebe sets up Ross on a date
Funniest Line-â€œ Have you ever wondered if there’s a town in Missouri or something named Sample? And then as you’re driving to the town there’s like, a sign that says,”You’re in Sample?”â€¦Chandler

Nitpick of the episode-Ok I have been putting this off but in this episode its unavoidable. During this season Matthew Perry developed a Vicodan addiction, and as the season progressed he became noticeably thinner. This episode he looks justterrible, and the fact he has a main story doesnâ€™t help. His clothes barely fit and itâ€™s just hard to watch this episode and not notice how sick he looks. And yes, this did affect some of the prior episodes.

Standout Character-Rachel, her jealousy is understandable

Final Thoughts-Horrible episode, ok I said it. Even a cameo by Robin Williams and Billy Crystal canâ€™t help it out. Monicaâ€™s story is basically about how crazy her boyfriend is. Why would he want to be the ultimate fighter anyway? I am glad to be rid of Pete finally, and why is the story about him? Chandlerâ€™s story is bad, especially in todayâ€™sworld of sexual harassment, but as I noted itâ€™s even worst when he looks so sick. And Rossâ€™s story isnâ€™t even really a story so much as a lead in to the next episode. I did like Rachel and Phoebe’s scenes.

Season 3, Episode 25
The One at the Beach 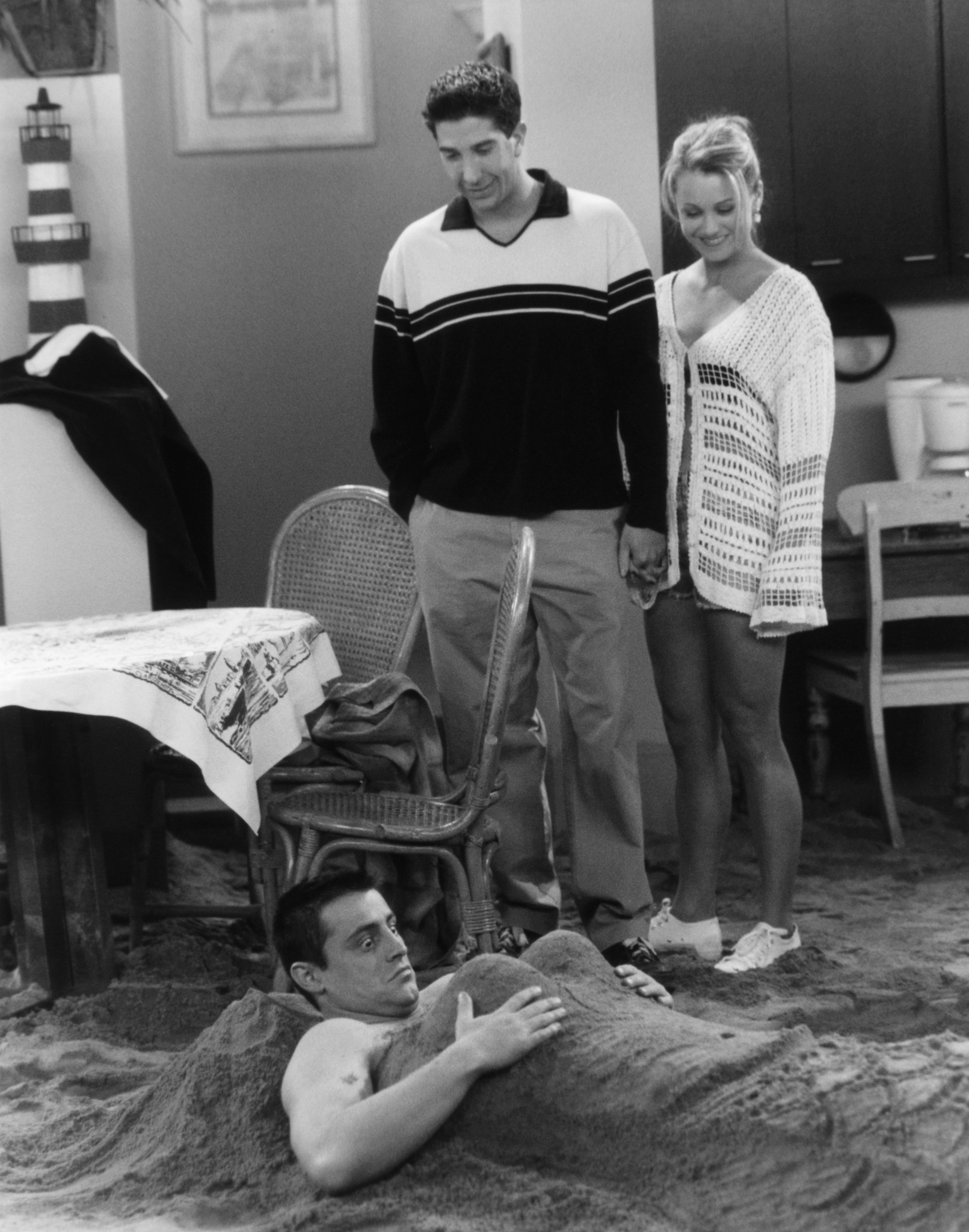 Plot Summary-At a beach Phoebe meets an old family friend with a secret, Chandler tries to get Monica to admit he is boyfriend material, Ross discovers that Rachel still loves him.

FunniestLine-â€œIf you go with Bonnie you’re doing the smart, sensible thing and moving on, and, if you go with Rachel, does that mean Bonnie’s free tonight?â€â€¦.Joey

Nitpickof the episode-Sometimes Rachel can be really mean, as evidenced here by talking Bonnie into shaving her head

Standout Character-Phoebe, only with her could they made that premise work

Final Thoughts-What a refreshing episode after the drek of the past few shows. This was a strong end to the season and a decent cliffhanger. While the whole Rachel is still in love with Ross thing wasnâ€™t really a surprise, Phoebe finding her birth mom sure was. The stuff with Joey is pointless fun. And the amusing thing about this episode is the way Monica and Chandler foreshadow their relationshipwhich was still a year away. Great ending to a season with highs and lows. Will the next season be better?
Grade=A