Season 9, Part 1
Season 9, Episode 1
The One Where No One Proposes
Â 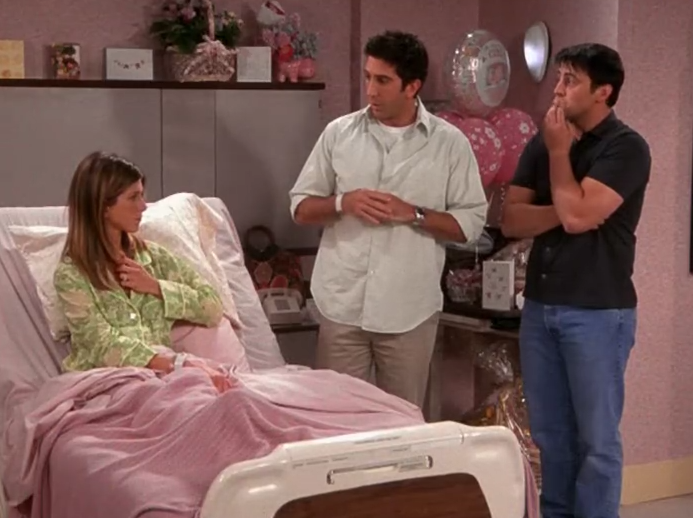 Plot Summary-Joey, Ross, and Rachel try to sort out who proposed to whom, Monica and Chandler are caught having sex by Monicaâ€™s father
Funniest Line-â€œOh, I still can’t believe my dad saw us having sex! He didn’t make it toone of piano recitals, but this he sees!â€â€¦.Monica
Nitpick of the episode-I guess I should point out that the whole scenario here is forced, why would Rachel ever say yes to Joey like that? It takes her about a second to change her mind.
Standout Character-Rachel, she deals with a real emotional roller coaster here
Syndication Edit-Scene Extensions
Final Thoughts-This is a very difficult episode to talk about because so much happens in such a short amount of time. Rather than quickly resolve the cliffhanger,the episode keeps making it more and more complicated by having people think different things and then unintentionally mislead each other. By the end itâ€™s all sortedout, and we end on a stunned Ross who realizes that Rachel actually said yes to Joey. The Chandler/Monica stuff is ok and Phoebe is here to mix things up.
Grade=B+
Season 9, Episode 2
The One Where Emma Cries
Â 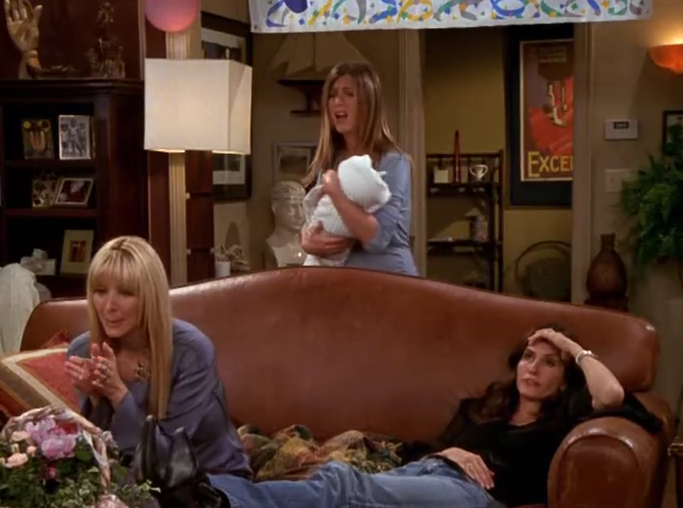 Plot Summary-Rachel canâ€™t stop Emma from crying, Joey and Ross have a confrontation,Chandler learns he is being relocated to Tulsa
Funniest Line-â€œHere’s the thing. I went home and told my wife about Tulsa and she won’t go. See me, I love Tulsa. Tulsa is heaven. Tulsa is Italy. Please don’t make me go there.â€â€¦.Chandler
Nitpick of the episode-Canâ€™t let this one pass. The opening resumes right after the previous episode ended in Rachelâ€™s hospital room, but when Joey opens the door the hallway that was once out the door has been replaced by a wall. Obviously they tore the rest of the set down, but did they have to be soooo obvious about it?
Standout Character-Monica; sheâ€™s just adorable when she manages to quiet Emma down
Syndication Edit-Phoebe and Monica admiring Emma
Final Thoughts-For some reason it feels like itâ€™s been ages since Chandler got a story arc and being relocated to Tulsa is an interesting idea. Of course the main drive of the story is Rachel and the crying baby. I do get tired of that sitcom clichÃ© of the baby that NEVER stops crying, but it does work here for the most part. They also take Ross and Joeyâ€™s story to the next level, and much to my surprise they nearly get into a fight! Ross actually throws a punch! But I give the episode credit, Ross’s reason for not proposing makes sense. If they had ended the Joey/Ross stuff here it would have worked, but instead they dig it back up at the end of the season. But more on that later. This is apretty good episode for the most part.
Grade=B
Season 9, Episode 3
The One with the Pediatrician
Â

Plot Summary-Rachel has to find a new pediatrician and finds out an odd secret about Ross, Chandler and Monica prepare for Chandlerâ€™s move, Phoebe and Joey set up blind dates for each other
Funniest Line-â€œI know yeah, I feel like we’re all growing up. Person named Weener. Godthat kills me!â€â€¦.Joey
Nitpick of the episode-Rachel bothered a doctor in the middle of the night because Emma hiccupped? Yeah Rach, you may want to calm down a bit.
Standout Character-Ross, once again he has a stupid story but manages to make it funny
Syndication Edit-Rachel saying the doctor fired them, Joey ordering food, Monica telling that she quit her job (episode went long)
Final Thoughts-You canâ€™t tell from this episode but we finally get a big change in Phoebeâ€™s character direction. After the endless parade of boyfriends of the week we finally get a serious relationship. More on that was we go but itâ€™s about time! Mike was ok, though I donâ€™t think he ever fit in perfectly. The chemistry between him and Phoebe does work. The stuff with Ross and Rachel is great and we advance the whole Tulsa plot. The creators were smart enough to realize they needed to give Monica a strong reason to not follow her husband, and they do a great job.
Grade=B
Season 9, Episode 4
The One with the Sharks
Â

Plot Summary-Ross makes Phoebe realize she has never had a long term relationship,Monica catches Chandler in a compromising position, Joeyâ€™s dates apartment seems really familiar
Funniest Line-â€œIf you hadn’t just had a baby with my best friend I swear to Lucifer a rabid dog would be feasting on your danglers right now!â€â€¦.Phoebe
Nitpick of the episode-I have lots to say here but I want to give the show credit first. Many people say that Phoebeâ€™s statement about never having a serious relationship or moved in with someone is wrong because she agreed to move in with Gary in Season 5. Well, yeah she did but she was reluctant and it never went anywhere because he shot a bird. So I think her statement is still valid.
Standout Character-Joey, of the three stories his is the least stupid
Syndication Edit-Chandler singing, Rossâ€™s answering machine message is longer
Final Thoughts-Well folks, we made it. Itâ€™s finally here. My absolute least favorite episode of Friends, ever. I am going to paraphrase Roger Ebert and say that I HATED HATED HATED HATED this episode! When I first saw this I had recorded it, and erased it the next week! The stories are just bad. Why would Monica believe Chandler likes shark porn (SHARK PORN???) of all things? It didnâ€™t occur to her that he changed the channel? Â DID THEY JUST MEET??? Chandler has proudly watched porn right in front of her in the past! Why didnâ€™t Rachel tell Monica to ASK HIM? Why would Phoebe be reduced to tears realizing something she should have been aware of? Since when does Phoebe cry like that? Why does Ross make up that boyfriend? Why canâ€™t Joey recognize an apartment he was in before but he does recognize the girl when she enters? What does Ross hope to accomplish by pretending to be Phoebeâ€™s made up boyfriend at the end? I HATE THIS EPISODE!
Grade=F, the only failing grade I will give this series but this episode is STUPID
Season 9, Episode 5
The One with Phoebeâ€™s Birthday Dinner
Â

Plot Summary-Phoebe wants all her friends to celebrate her birthday with her, Rachel is afraid to leave Emma, Monica is angry at Chandler for smoking
Funniest Line-â€œCan’t hold her own head up, but yeah, jumpedâ€â€¦.Ross
Nitpick of the episode-There is one thing I hate in this one. Chandler has every right to be upset at Monica, lying to him so he would have sex with her even though she was still angry, and yet the script turns it around to make Chandler the one who is wrong.Â  It doesnâ€™t make sense to me, if Monica is furious with Chandler why is she even worried about ovulating?
Standout Character-Phoebe; it takes skill to make yelling at someone to pick up a sock funny as hell!
Syndication Edit-More of Monica and Chandlerâ€™s argument
Final Thoughts-What a rebound, this episode is great! Â Phoebe just wants a birthday dinner with her friends, but her friends are so occupied. The stuff at the restaurant is funny, as we see Joey anxious to eat. Monica and Chandler have an argument while Rachel is in full overprotective mode. Very good episode with some real laughs. Always nice to relive Chandlerâ€™s smoking habit. The scene at the restaurant when all of them are finally together is fantastic. This episode really illustrates how different things are in this show, and Joey really shines atthe end. Â I do have one question, why isthis episode set at Halloween? It serves no point at all!
Grade=B-
Season 9, Episode 6
The One with the Male Nanny
Â Plot Summary-Ross and Rachel hire a male nanny, Monica tells Chandler a co-worker is the funniest guy sheâ€™s ever met, Phoebe is surprised when David appears
FunniestLine-â€œEmma, one day you’re gonna grow up and be a big girl, just like your daddy.â€â€¦.Rachel
Nitpick of the episode-Hate to say it, but I am on Rossâ€™s side in this one. And Monica should have known better than to say her new friend was so hilarious since it is Chandlerâ€™s thing.
Standout Character-Chandler, we donâ€™t see him being insecure very often but if he is going to be, then his sense of humor would make the most sense
Syndication Edit-This was another expanded episode so lots of stuff including a scene with Chandler talking to Joey about what Monica said about her co-worker
Final Thoughts-This is the 200th episode so it was expanded, and sadly it kind of suffers from the expanded format. Sometimes more story is not a good thing. But itâ€™s still a decent episode. The story with the male nanny seems padded;the ending could have come ten minutes earlier for all the difference it makes.The stuff with Chandler and Monica is great, this show never realty explored WHY Chandler is always making jokes, and this episode finally gives an idea why he does that. Phoebeâ€™s character development continues as we see she really likes Mike, even with David around. You could argue bringing David in is like doing the whole Chandler/Richard thing all over againâ€¦and youâ€™d sort of be right as we will talk about when we get to the season finale.
Grade=C+
Be back later this week to continue our look at season 9, including (gasp!) another clip show!!
Share on Social Media
twitterfacebooktumblrredditemail
Follow us on Social Media
twitterfacebookyoutubetiktok