During production of the first Fantasia Walt came to a fascinating conclusion that Fantasia could be a never ending experience. There are so many pieces of classical music that every year a new Fantasia could be released with new segments. Unfortunately, Walt would never live to see that dream realized. Due to new found appreciation of Fantasia on VHS the company decided to finally continue Fantasia at the end of the millennium and called it Fantasia 2000. Conducted by James Levine and performed by the Chicago Symphony Orchestra and introduced by various celebrities.

The film opens with a really nice interdimensional abstractÂ  concert hall. By having an abstract concert hall the film really captures the timeless nature and feel of Fantasia. Deems Taylor’s narration along with a flashes of the original is done very well and basically makes us feel like the original never left. The idea of an abstract opening returns and the abstract butterfly creatures and colors fit the piece perfectly. This is a great opening to the film. It’s after where the problems begin.

I agree with Doug Walker on the point of the celebrity introductions. The celebrities themselves are fine, but their jokes and most of their lines are terrible. The humor is incredibly forced and lame(exceptions are James Earl Jones and Angela Lansbury). I would have liked it if the celebrities introduced the pieces straight. Deems Taylor may be considered boring and rather conservative by modern standards, but the fact that he didn’t rely on gimmicks and BS and just introduced the pieces like a real concert is what made him awesome. Another complaint I have is the fact that this film tries really hard to appeal to children. I know it’s “Disney” and all that, but that excuse is not acceptable because Fantasia (and Disney in general) was meant to be enjoyed by everyone and NOT bound and tied to a specific demographic. This is evidenced by the fact that this film’s length is considerably shorter because they were afraid of the KIDS getting bored. The animation has a lot more bright colors and a lot more cartoonish action to contrast the much darker atmospheres of the original and to keep the KIDS entertained due to the lack of dialogue and “boring” music. I understand the company’s fears because there are a lot of seemingly more interesting things for kids to be engaged in such as television and video games, but the result is hurtful to the legacy of the original.

Pines of Rome is a very eye catching piece. The scale is absolutely amazing. The polar environment is beautifully animated (with computer assistance) and the animation fits the piece extremely well. The story in it very simple and sweet.

Fist of all I LOVE the piece of Rhapsody in Blue. Gershwin is awesome! The segment itself is done very well. The style of Al Hirschfeld complements the music beautifully. One of the best parts of the film, but I do think that it is a little overrated compared to another segment that I’ll talk about later.

The next piece tells the story of Hanz Christian Anderson’s “The Steadfast Tin Soldier”. This is a fine piece that is set to animation that is quite good. The designs of the setting and characters is done very well. I love the lighting change when all the objects come to life. The story is very sweet and enduring. One thing that bugs me is that those other soldiers are really mean. They don’t back up their fellow soldier that has a disability and they don’t try to stop the jack in the box from harassing the ballerina. What apathetic jerks. They don’t deserve to be soldiers. Anyway, the sweet story, the great piece and the animation mesh very well.

CARNIVAL OF THE ANIMALS (SaÃ«ns)

The piece is half and half for me. The cartoony aspect in this piece is far greater than Dance of the Hours and that’s saying a lot. This piece was clearly meant for children. The music is very nice and I like the opening, but the yoyo aspect seemed unnecessary. They could have just done flamingos dancing gracefully and the piece would have been more effective.

The Sorcerer’s Apprentice is back and is a joy to watch again. It was extremely smart of the filmmakers to put the classic piece in the lineup and to really connect it to the classic film. The fact that Stokowski is resurrected is really cool and the transition back to the Chicago Symphony Orchestra is done fairly smoothly. The sequence is as great and awesome as it was in the original.

The introduction with Mickey trying to find Donald is also an exception to the bad celebrity intros because Mickey getting kicked out of Daisy’s dressing room is hilarious. Donald wasn’t going to let Mickey hog the Fantasia spotlight so he makes his Fantasia debut in this sequence. In similarity to Mickey as a sorcerer’s apprentice Donald is Noah’s apprentice. The story of Donald and Daisy both thinking that the other died in the flood is genuinely endearing and when they find each other it’s very sweet and charming. The gags are genuinely funny. Donald is trying to do his job, but since “he’s the one with all the bad luck” he constantly gets smacked around in true cartoon fashion.

Fantasia 2000 ends with a stark contrast to the cartoony antics of the last segment and it is without a doubt the best part of the film. This piece is a perfect followup to Night on Bald Mountain/ Ave Maria. Since that sequence was a battle of good and evil Firebird examines the consequences of that battle with life death and renewal. The imagery is obviously inspired by the destruction that Mt. St. Helens caused during it’s devastating eruption. The Spirit of Life is bringing life to the forest, but is soon interrupted by the Firebird of the volcano that is destroying everything in it’s path. The Firebird retreats after seemingly killing the Spirit of Life. With the help of a stag the Spirit of Life regains her strength and makes the grass and trees grow and is triumphant. The imagery is flat out beautiful and it’s all in perfect harmony to the music. I think it’s one of the most magical moments in Disney history and is the ABSOLUTE PERFECT conclusion to Fantasia 2000!!!!!!

Fantasia 2000 is a movie that has a big name to live up to. While it doesn’t succeed in all of the original’s qualities it is a worthy successor to the original classic. The spirit is still hear and is probably one of the best if not the best Disney sequel ever made. A very good film.

Join me next time when I review an extremely underrated Disney film: Bambi! 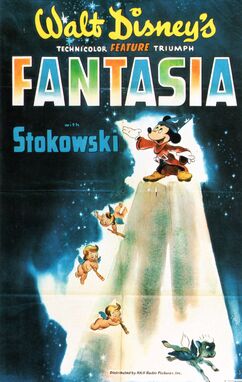