In 2008 the third Little Mermaid movie was released. It was certainly an odd time because Disney was actually not making sequels anymore (thank god). Due to how reviled the second one is many people dismissed this film as just as bad or worse than the second. But they couldn’t be farther from the truth. This is an unexpectedly charming, funny, and endearing film.

This film is a prequel taking place about 1 year before the first film. The film opens with Sebastian’s narration about the early days of King Triton’s rule and we are introduced to his wife and Ariel’s mother Queen Athena for the first time. Sebastian describes an event that answers a question we have all asked since the first movie:”What happened to Ariel’s Mom?” It turns out she was killed by pirates and Triton was helpless to save her (Due to plot convenience he didn’t have his trident at the time). Triton is heartbroken and takes his grief out on his kingdom by banning music from Atlantica. Now Ariel is about 14- 15 years old and she isn’t happy with the doom and gloom that Atlantica has been for the past decade. While being punished for a harmless prank (Triton is a callous jerk in this movie) she meets Flounder and the two become friends. One night she follows Flounder to a speakeasy type club called “the Catfish Club” where music and dancing abounds and Sebastian is the main attraction and singer. Ariel is reminded of the happiness and joy that music can bring and since Ariel’s Mom loved music it brings back memories of her as well and Ariel is captivated. She is made a member of the club and brings her sisters along so that they can feel that same happiness and energy and it brings the siblings closer as a family. Then the girls’ governess and villain Marina Del Ray discovers the club and informs Triton. The club is shut down and Asshole Triton destroys it. He then confines the girls to the palace and Ariel stands up to him (finally) and states “I may not remember much about my mother. But I know she wouldn’t have wanted this.” She busts Sebastian and the club’s band out of jail and the group heads out of the kingdom and doesn’t want to live under Triton’s tyranny(I’ll explain my choice of words when we get to Triton’s character) under the phrase “Without music this place just isn’t home.” Sebastian leads the group to an area where Ariel finds the music box that was an anniversary present Triton gave to Ariel’s Mom and was thrown away after her death. Ariel decides to return to Atlantica to make Triton remember the happier times, but they are attacked by Marina’s pet electric eels and the group defeats them and Marina. Music is restored to the kingdom and they live happily ever after. 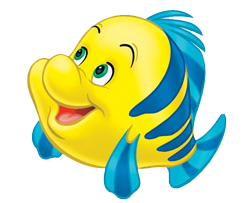 The thing that bugs me about Flounder is that this takes place before the first film and he doesn’t act like the guppy. While in the first film he jumps at his own shadow. This inconsistency is a big problem with prequels. Character developments are already present when they haven’t happened yet. Yet this is a minor nitpick and doesn’t detract from the fact that he is a good character. 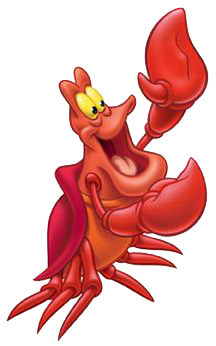 The crab is back and he is better than ever. Not only is he the king’s adviser he also serves as narrator. Even though he usually always sides with Triton in this film he deliberately breaks the law by operating the Catfish Club. This is not out of character because music is in Sebastian’s blood and even he knows that this ban on music is stupid. Horatio Felonious Ignacious Crustaceous Sebastian (I think that’s his first name) is at his finest here.

The villain of the movie and the worst part of the movie. In my opinion she’s worse than Morgana. What is it about Little Mermaid villains that make writers drop the ball. It’s not that hard to get a competent nemesis for Ariel. Ariel is one of the few Disney characters that actually has a rouge’s gallery. They consist of “Evil Manta, Crab Louie, DR. Vile, the Sharkanians, and the Octopans. Any one of those characters could have been the villain and it would have been fine. Instead we get the girls’ whiny governess that wants Sebastian’s job and when Triton gives her the cold shoulder she sends out her gang of electric eels to kill Ariel and Sebastian. LAME!!!!!!!! Hell, I think that just those gang of eels would have been a better villain than her. They’re intimidating and they have a cool design that prevents them from being Flotsam and Jetsam ripoffs. I hate this character. 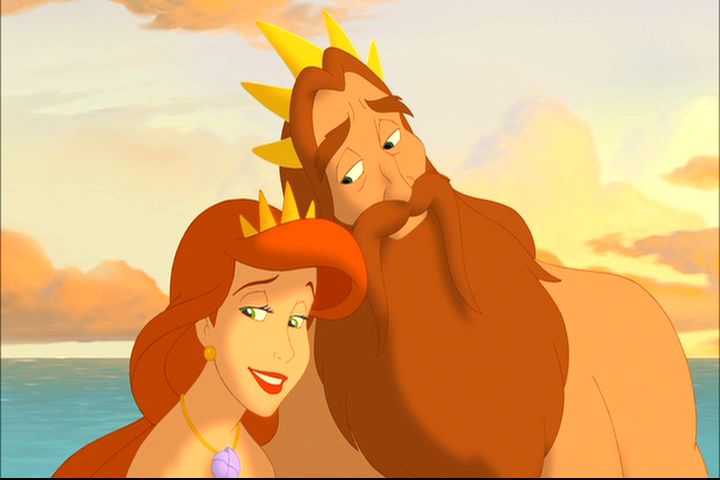 Another nitpick. His character in this movie makes me lose respect for him. When he doesn’t move on after Queen Athena dies he takes his grief out on his kingdom. He’s under the school of thought that “if I’m not happy, no one will be”. I’m sorry that is not how a king operates it’s how a dictator operates. In the first film I could understand why he was restricting Ariel, because he worries about her and wants to protect her. In this he punishes Ariel for harmless pranks and enforces his rules because he’s too selfish to let go and move on with his life! What happened to the proud king that wanted his daughters and kingdom to be safe? Another thing I’m actually mad about is the fact the film fails to address the most important aspect of Triton’s character. His hatred for humans. Instead of banning music he bans his people from going to the surface. This is a huge event that shapes the events of the next film and it is NEVER DISCUSSED OR ADDRESSED. CHARACTER DEVELOPMENT FAIL!! The good parts about his character is that his moments with Queen Athena are sweet and romantic and we get an idea of how much he cared for her. 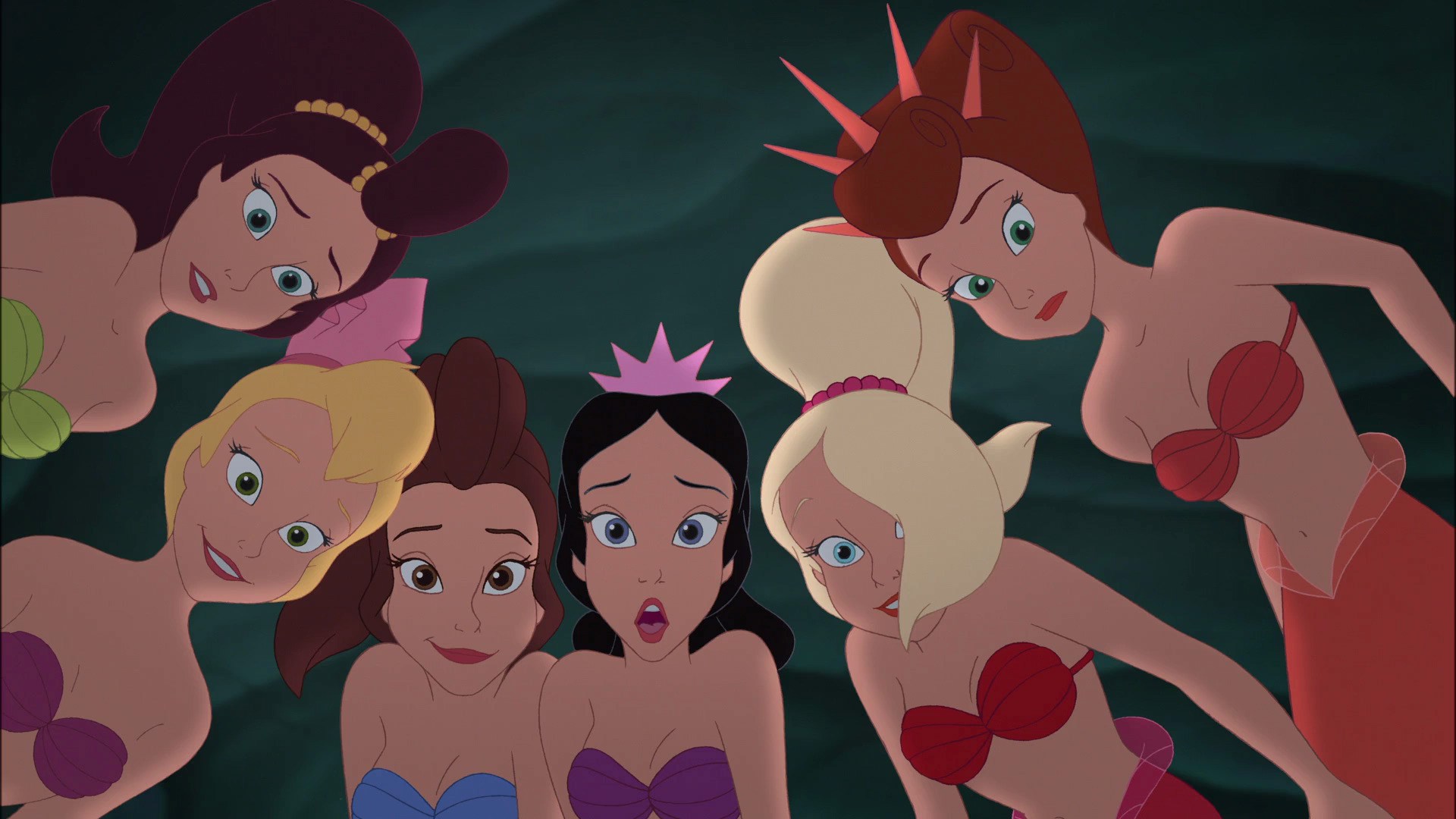 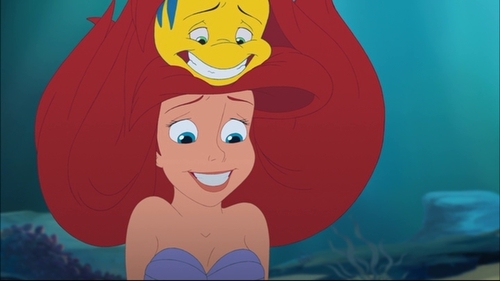 There’s really not much to say here. My favorite princess is back and better than ever. She may come off a little bit more mature than in the first movie, but the essence of the character is still here. I would have liked to see Ariel find the grotto and get interested in human objects (would have made a great clip after the credits where she finds the grotto and takes human objects there and then it cuts to black and says “To Be Continued in “The Little Mermaid”)

I find it ironic that this isÂ  a movie with music as a central theme and it has very disappointing music.The score is fine, but the songs are not so fortunate. The villain song is terrible. The lullaby that Athena sings isn’t even sung in it’s entirety because Sebastian’s opening narration is talking over it. Ariel’s song “I remember” is a good song that captures Ariel’s feelings well. Then we have the licensed song “Jump in the Line” also known as “Shake Senora” and this is used well in the movie, but the lack of original songs hurts. Check out the link to “Jump in the Line” below.

While this movie may have been lackluster on the ears it certainly is a feast for the eyes. The animation is much improved and the art direction is very nice. There are certain shots where the movie doesn’t make you feel like you’re underwater because of a lack of details such as light shining through the water etc., but it’s a mere nitpick. Director Peggy Holmes was a choreographer before she got into animation. This training made the character’s movements extremely expressive and fluid. Another great thing about the animation is the design of Ariel and her sisters (Ha Cha Cha) (I was the appropriate age when this came out SHUT UP!) Even though Queen Athena is only onscreen for about 2 minutes the audience still connects with her because the audience feels her presence in the music as well as her daughters. Her spirit is in this film and it is conveyed beautifully.

While this film has it’s problems it is still a really good film. One of the very few Disney sequels that’s actually good. If this film could be summed up in 3 words they would be charming, endearing, and funny. I now leave you with Ariel, Flounder, Sebastian and the Catfish Club band giving you an encore! See you next time when I take a look at the kick ass “Little Mermaid” animated series!
VERDICT: 4 music boxes out of 5