The steel drums metrical sung hums through the air, thick with tobacco and subtle perfumes of lily, berries, and peppermint. Sloe flutes whistles along with the beating drum, and the trestles of tambourines rattle alongside.

The flutter of clothes, mirroring off the marble floors, tinted by the dark foam walls, craved with the lives of the masters, having the thin, soft, pale hands, run across them. Small and tender feet, gliding airlessly, angle like, with the beads of gold and silver.

Rippling to the dance of the frail body, cast in the flesh tone of melted brass, golden clamps glim with the candles lights, shadowing the body of the dancer, in a mist of hiddenness. Faint clinks of jewels above her head, swaying along her, entwine with the music of the people of sand.

As the players stay from sight, keeping eyes on the goddess of nimble raves. How the slime and weightiness excellent chains lie on her, focal point, of what makes her woman, the gift of what life as given her for surviving of the young and reminder for men, that just as them that lies beneath clothes, hold same meaning future, responses in differences of human.

Once more as limbs of dancer, moves more across the floor, closer, teasing still entail, with no words or gestures, beckons those with eyes near. Still out of reach, but phantom aftershocks of her baby graces their fingers. Having those pale pink lips, form a subtle smile.

A sparkle: in her eyes of black lagoon as lids hood over them, in acting that as the princess waiting for her prince to awaken her. Legs lowering to the cool ground, hands and arms keeping her upper-half; push, forward, again only to tease.

A tease that means equableness and forbidden temptation.

As the dance leans out her neck more, in signs, that it needs to be mark, needs ownership, but the hands move to face them, that she is still her own person. Once more, that flirt motion is there, stronger, and varies wideness of understanding what she is asking for.

And all the lookers could say is . . . in lowness of speech is a yes.

Paint of the year is unknown 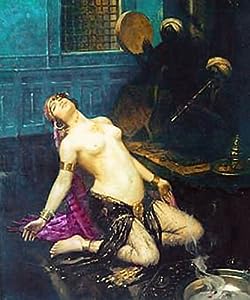