Skip to content
Season 10, Episode 7
The One with the Home Study
Â

Plot Summary-Phoebe and Mike donate their wedding to a charity and then want it back, Monica and Chandler are approved for adoption but there may be a snag concerning Joey. Ross discovers Rachelâ€™s irrational fair of swings.
Funniest Line-â€œLike I said I was thinking of taking Emma to the museum of knives and fire.â€â€¦.Ross
Nitpick of the episode-Yeah, about that swing story. No, I just donâ€™t buy it. Rachel is afraid of swings?
Standout Character-Joey, just love the way he saves the day with the adoption worker
Syndication Edit-Scene Extensions
Final Thoughts-This episode is pretty funny. Yeah the stuff with Rachel is a little silly but considering how shallow she was I guess I can believe anything happening to her hair would be considered a traumatic event. As I said Joey saves the day with the adoption worker which is great and we get more Phoebe and Mike antics. Average stuff but worth watching.
Grade=C+
Season 10, Episode 8
The One with the Late Thanksgiving
Â

Plot Summary-After talking Monica into cooking Thanksgiving dinner distractions cause the others to arrive late
Funniest Line-â€œYou know what? I don’t want to be with them either. But its Thanksgiving and we should not want to be together togetherâ€â€¦.Rachel
Nitpick of the episode-If the Thanksgiving shows were special because it was all the friends together, then why would they have an episode where they are apart for the entire show??? Â I do wonder if it was an homage to the first Thanksgiving show where they were stuck in the hallways,but I doubt it.
Standout Character-Monica, the way she forgets her anger after hearing the news about the baby is one of her best moments. Some things are more important.
Syndication Edit-Monica and Chandler discussing getting a new baby, Joey and Ross at the game
Final Thoughts-Not the best Thanksgiving episode. In fact I will go so far as to say itâ€™s the worst of them all. Itâ€™s a shame to; you would hope that the final one would be great. I just didnâ€™t buy the premise, why talk Monica into making Thanksgiving dinner and then skip out on it? Yeah there are some funny bits and the ending where we find out Monica and Chandler have been picked to get a baby is very nice but this episode as a whole is one giant clunker.
Grade=C-,worst Thanksgiving show?
Season 10, Episode 9
The One with the Birth Mother
Â

Plot Summary-Monica and Chandler meet the potential mother of their child, Joey dates a woman who eats food off his plate, and Ross gets the wrong outfit from Rachel
Funniest Line-â€œJoey doesn’t share food!â€â€¦.Joey
Nitpick of the episode-Finally Ross gets a stupid story which isnâ€™t funny. Itâ€™s just stupid. And what are the chances he would be wearing the same sweater as his date? Joey comes off as a jerk with the whole food thing also (though to be honest that girl would have annoyed me too)
Standout Character-Chandler, talk about character development! The speech he gives to Erica at the end is just fantastic. He has really grown up over the last ten years and it really shows here
Syndication Edit-The opening with Joey talking to Emma
Final Thoughts-The story with the birth mothers is really sweet. I could argue they didnâ€™t need the whole misunderstanding, but the way Chandler sweeps in to save the day is fantastic. Seriously his strongest moment of the series, and the best part is as mature as heâ€™s become we can still see hints of the old Chandler inside. I can live with Joeyâ€™s story about the girl eating food off his plate, but the Ross story is just plain stupid and doesnâ€™t even make sense really.
Grade=C-
Season 10, Episode 10
The One Where Chandler Gets Caught
Â

Plot Summary-The friends are shocked to learn Chandler and Monica are planning to move to the suburbs
Funniest Line-â€œYou can’t leave the city. What if you want Chinese food at five a.m.? Or a fake Rolex that breaks as soon as it rains? Or an Asian hooker sent right to your door?â€â€¦.Phoebe
Nitpick of the episode-A clip show? Again?
Standout Character-Monica and Chandler; it is so amazing watching them become responsible adults
SyndicationEdit-Scene Extensions
FinalThoughts-Yeah, we get another clip show. Whoopee. But hold on, this one is a little different because the story is not meaningless; in fact this episode officially sets up the series finale. It makes perfect sense that Monica and Chandler moving would be upsetting, and the episode handles this well. Itâ€™s a huge change, how could they not be upset? I also like the clips, which are basically a run-down of the good times in the apartment. So yeah itâ€™s yet another clipshow, but a really good one.
Grade=B+,surprisingly strong episode
Season 10, Episode 11
The One Where the Stripper Cries
Â

Plot Summary-Monica and Rachel throw Phoebe a bachelorette party, Joey appears on Pyramid while Chandler and Ross attend a college reunion
Funniest Line-â€œTwo guys in one night? Wow, I thought she became a slut after she got her nose fixed.â€â€¦.Monica
Nitpick of the episode-I really donâ€™t see why we needed another flashback, it feels likeâ€œThe one with all the Thanksgivingsâ€ all over again. I guess they really wanted to get Monica into the fat suit one last time.
Standout Character-Phoebe, her initial reaction to the stripper and then acceptance of him is just great
Syndication Edit- This episode and the next where expanded so lots of stuff got trimmed orcut out
FinalThoughts-This is an interesting episode. Danny DeVito plays the stripper and does a decent job. Phoebe is adorable. The stuff with the college reunion is only ok, I really donâ€™t see why we needed it. This stuff has been done before and really, who cares what they were like back then? Joeyâ€™s story is the quintessential Joey story, and thatâ€™s all I can say about that.
Grade=B
Season 10, Episode 12
The One with Phoebeâ€™s Wedding
Â 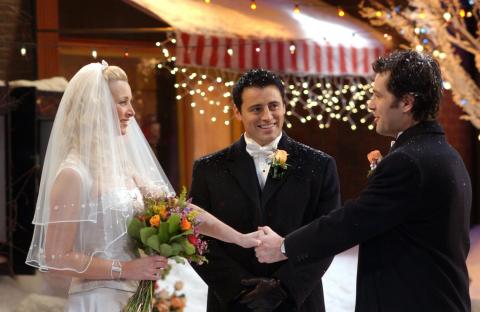 Plot Summary-Phoebeâ€™s wedding is almost ruined by control freak Monica, lack of a father of the bride, and a snowstorm which drives the ceremony outside
Funniest Line-â€œI just wanted a simple wedding. Where my fiancÃ© can go to the bathroom anytime he wants!â€â€¦..Phoebe
Nitpick of the episode-One small gripe. Phoebe fires Monica for being a control freak which is perfectly understandable. Why does the script turn that around to make Phoebe the bad guy who apologizes and begs Monica to come back? Monica nearly spoiled everything with her need to control every second.
Standout Character-Everyone
Syndication Edit-Expanded episode so lots of stuff including the original opening where Phoebe asks Joey to step in as father of the bride
Final Thoughts-Ladies and gentlemen, I give you a perfect episode! I am serious;there is nary a flaw in this one. I just love it. And the fact that of all the characters itâ€™s Phoebe who is getting married is really cool. The way her character was going you never would have seen that coming a few seasons ago.The episode is full of little complications but in the end the ceremony is beautiful and being outdoors makes sense for her anyway. And the way all the characters work here is just great, from Chandler giving Phoebe away to Monica being the wedding planner to Joey being the minister. Ok I will admit Monica is annoying in the first act, almost to the point of being a bitch especially since it is Phoebeâ€™s wedding not herâ€™s! But she makes up for it and the second half is just perfect.Â  This has some real funny moments and some genuine heart. I canâ€™t say enough about it. Great episode!
Grade=A-,one of those episodes you find yourself smiling while watching
On Monday we will discuss the final five episodes includingthe series finale. Was it better than the Seinfeld series finale? (duh, dumbquestion)
Share on Social Media
twitterfacebooktumblrredditemail
Follow us on Social Media
twitterfacebookyoutubetiktok