Plot Summary-Chandler isnâ€™t happy with Kathyâ€™s new role, Rachel has an attractivenew customer, Monica fights to once again be the hostess of the group.
Funniest Line-â€œIt’s like someone literallywrote down my worst nightmareâ€¦and then charged me $32 to see it! â€“ ChandlerÂ  (one of my favorite Chandler lines which is cut in the syndicated episode)
Nitpick of the episode-Why???? Why go through all of that drama introducing us to Kathy, having Chandler fall for her, getting them together—-just to have the relationship end just a few episodes later! I mean, really? I could forgive them ending the relationship but did it have to be so fast and for such a dumb reason??
Standout Character-Chandler, poor guy will he ever get a break?
Syndication Edit-Monica explaining why she made a big deal about the guys hosting now only to change her mind
Final Thoughts-I decided not to make it my funniest line but there is no way I couldf orget to mention that Joeyâ€™s classic â€œHow you doin?â€ is introduced here. As for the episode, as infuriating as the breakup is I have to say it is handled well. You gotta feel bad for Chandler, and thankfully this would be the last woman to break his heart. I could complain how superficial Rachel is here but since this would come up again I guess it fits her character. I will have harsher words for her later, but in this episode she is ok. And as for Monicaâ€¦.sigh! Another boring story for her but believe it or not, and it gets worst a few episodes later! The best part of the episode is the end when the â€œwe were on a breakâ€ thing is resurrected in one of the best closing scenes of any episode.
Grade=B-
Season 4,. Episode 14
The One with Joeyâ€™s Dirty Day 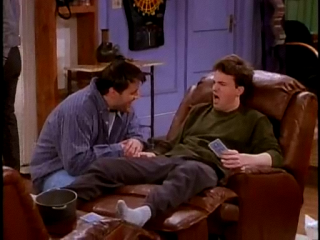 Plot Summary-Joey doesnâ€™t have time to shower before a job with Charlon Heston, Chandler is still dealing with his breakup, Rachelâ€™s quest to see Joshua in private ends up uniting Ross with Emily
Funniest Line-â€œYa know you, you just stop being such a wuss and get those off and youcome with us and watch naked girls dance around!â€â€¦.Phoebe
Nitpickof the episode-It is nice to see Ross and Rachel moving past the first episode of the season, but Rachel is really selfish here and it will get much worst. Â Itâ€™s ok for her to date someone but he canâ€™t?
Standout Character-Phoebe, for having no story Phoebe is really awesome in this episode
Syndication Edit-Monica commenting on the birds and Chandler
Final Thoughts-Hey everybody, love pointless stories that go nowhere and which are so weak we need stunt casting to make it through the episode? Man have I got a story for you!! Seriously, what the heck is up with that stupid Joey story? The title of the episode sounds like a childrenâ€™s book doesnâ€™t it? By the way creators, we canâ€™t smell what the others can so the gags are meaningless. I love how the start of the episode has Joey talking about bonding with hisfather, and that may have been interesting if we had seen it or it had even come up again! Just having a celebrity doesnâ€™t excuse you from making a good story. Â Before I go on to long, I will say that this is a big episode because we meet Emily and start the whole Ross/Emily arc which would change the series and even Rossâ€™s character. But I am getting way ahead of myself. The truth is Ross is not in the episode enough and one or two more scenes of him and Emily getting to know each other would have helped. Chandler is funny in this, his reactions at the strip club with theladies almost makes this episode a winner.
Grade=C,badly plotted
Season 4, Episode 15
The One with all the Rugby
Â

Plot Summary-Ross takes a Rugby challenge to impress Emily, Chandler runs into Janice who wants to rekindle their romance; Monica tries to discover where alight switch is attached to
Funniest Line-â€œYou know all those annoying things from before we fell in love, like hervoice, and her laugh, and her personality? Well, they’re all back. Plus, she’s picked up like nine new ones!â€â€¦.Chandler
Nitpick of the episode-I already said this, but why did Chandler go back to hating her so quickly after he was so in love with her? Obviously because the creators wanted him to hate her again, there is no other good reason. And Monica spends an entire episode stuck in an apartment! Did someone on the writing staff have itin for her or something? No wonder Courtney Cox was so happy to see Monica and Chandler get together.
Standout Character-Ross, his relationship with Emily began very fast but here wefinally see him with her for more than five seconds.
Syndication Edit-Rachel telling a story about Joshua while Monica looks over electrical plans
Final Thoughts-Letâ€™s get the bad out of the way. The shafting of Monica continues,she does not leave the apartment for the entire episode and has no interaction with the other stories. Why? To be fair the final scene over the credits is very funny. The other stories are very funny with Chandler pretending to go to Yemen just to get rid of Janice and Ross risking personal injury to impress Emily. Good episode for all, except Monica.
Grade=B+
Season 4, Episode 16
The One with the Fake Party
Â

Plot Summary-Rachel throws a fake party for Emily as an excuse to see Joshua outside work. Phoebe finds herself craving meat.
Funniest Line-â€œOh, that’s sweat. You throw up all morning, and you’ll have that glow too.â€â€¦Phoebe
Nitpickof the episode-Rachel is almost unlikable in this episode. I mean throwing afake party, ruining Rossâ€™s plans (funny how she doesn’t min Ross with Emily when it benefits her), acting like a loon to get Joshuaâ€™s attention. She redeems herself in the end but this is not her best in this one.
Standout Character-Phoebe, her little story steals the show and it makes sense a vegetarian would crave meat
Syndication Edit-Top of the teaser, Monica commenting on Chandlerâ€™s horrible English accent, Chandlers spin the bottle turn. This episode went a bit long.
Final Thoughts-I know I just condemned Rachel in this episode but the episode as awhole works. I think itâ€™s due to that final scene between Ross and Rachel in the hallway. Rachel really seems nuts here. Phoebeâ€™s story is cute; I understand how hard it probably was to come up with new stuff for her so I will let it go. The episode shows how serious the Ross/Emily thing is. We really see that Ross loves her in this episode, and that carries over to the next.
Grade=B-
Season 4, Episode 17
The One with the Free Porn
Â 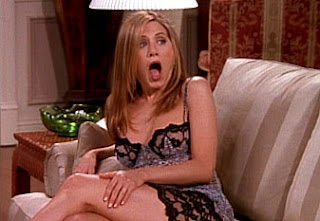 Plot Summary-Phoebe is asked to name one of the triplets, Things interfere with Rachelâ€™s date with Joshua, and Ross is obsessed when Emily offers to show Susan around London
Funniest Line-â€œYours is the stupidest name I’ve heard in my life. It’s not even a name.It’s barely even a word. It’s kinda like chandelier, but it’s not!â€â€¦.Joey
Nitpick of the episode-Iâ€™ll be honest, Iâ€™m stealing this one but itâ€™s a good observation. Why doesnâ€™t Rachel take the opportunity to change out of hernightie before going to dinner with Josh and his parents?Â  By the way not only was the actor playing Josh Jennifer Anistonâ€™s boyfriend at the time, but the actor playing Joshâ€™sfather is in fact Matthew Perryâ€™s father.
Standout Character-Rachel, nice save with the dress bit
SyndicationEdit-Scene Extensions
Final Thoughts-At long last, an above average episode! Yeah you could argue the Ross story is just rehash but the scene where the girls analyze him is really good. There were some great moments in the Rachel story and I have to say I am glad Joshua didnâ€™t last much longer. The whole awkward moment with the dress was hilarious. But the real gem is the Phoebe story which involves Chandler and Joey. It appears Chandler is having a crisis about his name, until that last second when we see that he was just playing Phoebe the whole time so she would name the kid Chandler. Fantastic! Itâ€™s always nice when the writing is smart, and this will even pay off more down the road.
Grade=A-
That’s it for today, join me later in the week as we look at one of the series most dramatic turning points.