Season 2, Episode 7
The One Where Ross Finds Out

Nitpickof the episode-The whole Monica and Chandler story feels different knowing what will happen o these characters down the line.

Standout Character-Ross & Rachel, they are both perfect in this one

Syndication Edit-We actually see Ross and Julie at a pet store, but Ross is distracted by his conversation with Rachel. Rachelâ€™s dinner with Michael is a bit longer.

FinalThoughts-Wow, talk about filler! Obviously this episode was all about theRoss/Rachel stuff because the other stories are so boring, especially the Monica/Chandler one. Yawn! Phoebeâ€™s story may have worked, if we met this boyfriend even once! However this episode is also a classic and itâ€™s all because of the Rachel and Ross scenes. From the drunken phone call to the big kiss at the end, every time they are on the screen it works. Although I do feelbad for Julie, I did like her; but it is nice to finally see Ross and Rachel together!
Grade=B-,all about Ross & Rachel Plot Summary- Ross must choose between Rachel and Julie, and make a list with Chandlerâ€™s help. Monica gets a job making fake chocolate.

Funniest Line-â€œOh, sweet lord, this is what evil must taste like!â€â€¦.PhoebeÂ  (this was a hard choice to be honest, great lines in this one)

Nitpickof the episode-Not a nitpick just an observation. Every year this show did anamazing Thanksgiving episode, except this one. Not sure what happened this season but the Mockolat story is as close as we get.

Standout Character-Ross, you got to feel bad for the guy

Syndication Edit-Monica trying to come up with recipes, a scene in Central Perk with the guys feeling bad for what happened and Chandler getting the blame

Final Thoughts-This episode has one of the funniest teaserâ€™s ever, really showcasing the difference between men and women. It is nice to see the story from the week before continue, and we see it wasnâ€™t a simple choice for Ross to just dump Julie. But of course just when they are getting together we need something to keep Ross and Rachel apart, so thatâ€™s what we get. Monicaâ€™s story is just filler, but does makes for a few good laughs. I love how technology advances in the series. In this episode Chandler gets a laptop, as the series goes on we hear about chat rooms, caller ID, social networking on the internet, and cellphones.

Grade=B,Tough one to score because the filler story has some funny moments and overallthis episode is stronger than the last

Season 2, Episode 9
The One with Phoebeâ€™s Dad 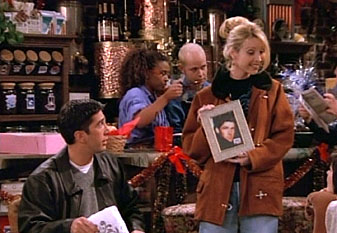 Plot Summary- Phoebe discovers that her real father is someone she has never met, Monica tips with cookies and then throws a tropical Christmas party when Ross breaks the radiator, Chandler and Joey wait too long to buy presents

Funniest Line-â€œDonâ€™t you have to be Claymation to say stuff like that?â€â€¦.Chandler

Nitpickof the episode-While the scene where Joey and Chandler give their gifts is a favorite of mine, you do have to stop and wonder why they waited so long to buy gifts.

Standout Character-Phoebe, itâ€™s about time we start exploring her character a bit

FinalThoughts-This is a solid episode. We get a story arc for Phoebe, and itâ€™s about time. With a backstory like hers youâ€™d think there would be all sorts of things they could delve into. This is a decent Christmas episode and really thereisnâ€™t much to say. Itâ€™s one of my favorite holiday episodes and I watch itevery year. The last scene with Joey fixing the radiator is simply priceless.

Season 2, Episode 10
The One with Russ 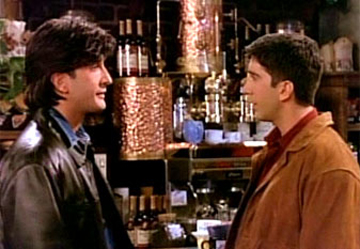 Plot Summary-Rachel dates a man who looks a lot like Ross; Monica discovers that Fun Bobby is fun for a reason. Joey is offered a part on a soap opera.

Funniest Line-â€œSee now, they’re as different as night and … later that night.â€â€¦.Monica

Nitpickof the episode-I have trouble believing Joey would have to do so much soul searching about his dilemma in this one. It is Joey, right?

Standout Character-Joey, glad to see him finally get his break

Syndication Edit-The tag where Julie ends up with Russ, nice to give her get a happy ending since I did like her character.

Final Thoughts-I saw a review once where they compared the Russ stuff to the old Brady Bunch episode where Peter discovered he had a twin. Always thought that was harsh. True the Brady Buncg episode was lame but this works, because it wasnâ€™t done as a stunt but as a way to get us to see Rachel still loves Ross despite her objections. David Schwimmer takes Rossâ€™s likable characteristics and somehow makes them annoying with Russ, not sure how he did that. Monicaâ€™s story is pretty good, especially since we met Fun Bobby once which always helps. Joey begins his story arc here and I will talk more about that as we go.

Season 2, Episode 11
The One with the Lesbian Wedding 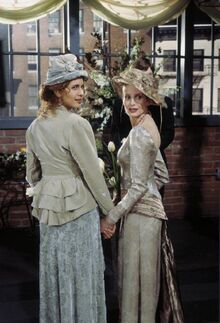 Plot Summary-Carol and Susan decide to get married, giving Monica a catering job. Rachelâ€™s mother comes to town with surprising news. Phoebe is possessed by a massage client who died on the table during the massage.

Funniest Line-â€œThat’s a little more relaxed than you want them to get.â€â€¦.Chandler

Nitpickof the episode-The fight Carol and Susan have is a little contrived, but Ross is so sweet in that well written scene that we donâ€™t care

Standout Character-Monica, she is in full psycho mode in this one and somehow we still like her. There is one moment when Carol comes in upset and Monicaâ€™sinstinct is asking if she will still get paid. Ross flashes her a look and Monica cools down, and we see that there is a person in there. I said beforeand will say it again; Courtney Cox did a great job keeping us from hating her guts

Syndication Edit-Scene extensions including extra dialogue between Rachel and her mother, the tag where the gang discusses who will be the next to get married

FinalThoughts-We meet Rachelâ€™s mother but unlike Joeyâ€™s parents last season she doesnot take over the story. The story is still very much about Rachel and thatâ€™swhy it works. Phoebeâ€™s story should be ridiculous but somehow it never gets that bad. The end is predictable and even a bit insensitive but we can let it go. Ross is great in this episode, first being all jealous of the wedding andthe being the bigger person and helping Carol when sheâ€™s in crisis. I like Rossat this point in the series, because I wonâ€™t like him as much when he gets intodoofus mode later on.

Season 2, Episode 12
The One after the Super Bowl 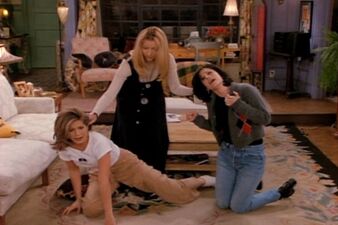 Plot Summary-Ross looks for Marcel, Monica and Rachel fight over Jean Claud VanDamme, Phoebe gets a new job singing to children, Chandler hook up with an old friend, Joey has his very own stalker.

Funniest Line-â€œ Yes. Hitting her with a frying pan is a good idea. We might wanna have abackup plan though, just in case she isn’t a cartoon.â€â€¦.Chandler

Nitpickof the episode-Monica and Rachel switch places in this episode and it nevermade sense to me. Monica is the wimp afraid to approach Jean Claude Van Damm? Rachel is the one who walks over and does it for her? And sorry but Monica has NO RIGHT to complain after, not only was she the wimp afraid to go up to the guy but she gave Rachel the ok. Why shouldnâ€™t Rachel go out with him? And why would he want to date the girl cowing in the corner? This whole episode was forced but this story feels even more forced than the others. By the way if Joeyâ€™s stalkerbelieves he is Drake how did she find Joeyâ€™s address? Shouldnâ€™t she have been looking for Drakeâ€™s address?

Standout Character-Ummmm, everyone gets equal story so I guess weâ€™ll call this one a toss up

Syndication Edit-A final scene between Jean Claude and Monica and Rachel which is realty unnecessary and I am glad they cut it. In a rarity a scene was added insyndication to close part 1, itâ€™s a scene with Phoebe and Chris Isaak singing Smelly Cat.

Final Thoughts-This is a stunt show with stunt casting and because of that, it falls flat. It is pretty clear all the stories were stretched out or just stuck here without much development. Phoebeâ€™s story is pretty good but what is the point really? Just having her sing does not count as a story. The Chandler story is the only real memorable one and that is only because Julia Roberts is a pro and it shows. Joeyâ€™s story is ok; Brooke Shields is pretty good in this one. Yeah we get Marcel one last time, but I will admit as a former pet owner that I can see the appeal in those final scenes. Iâ€™m still glad the monkey is gone for good after this. I already talked about how lame the girls story is, though Phoebe does get some good lines while refereeing their fight.

Grade=C,about as average as you can get, and yet was the most watched episode ever

Thesecond part of the season is a big change of pace from the first part, but wewill discuss that more next week.