Season 2, Episode 1
The One with Rossâ€™s New Girlfriend

Funniest Line-â€œYes, yes it is… in prison!â€â€¦.Ross, this is the punch line to one of the greatest exchanges of the series! Chandler has some great lines in this one to,but I have to pick different characters occasionally!

Nitpickof the episode-Letâ€™s be honest, the Dudley Moore gag was really stretching things. They did a good job with it, but really how can even Phoebe make that mistake?

Syndication Edit-A great gag was cut out where Rachel wonders who gave Julie the number to their apartment. Itâ€™s a fantastic Phoebe/Joey line and worth checking out the unedited version of the episode for. Also the opening was originally Phoebe recapping the previous season.

FinalThoughts-Very often when a show is a huge hit in its first season, people worry whether or not the show can come back and recapture that magic. Well, when we watched this episode for the first time we realized we had nothing to worry about. This is a great episode! The jokes are great and not only do we feel Rachelâ€™s misery, but itâ€™s so nice to see Ross happy after he was miserable the whole last season. As I stated Friends was great for changing things about the show every season, the characters evolve so we arenâ€™tjust looking at them copying things they did before like so many other sitcoms do. In this case they flip the Ross/Rachel dynamic which changes the tone ofthe show and opens the door for new ideas. Finally, this is the final episode where a character comments on something they are watching on TV. Thank god that finally disappeared!

Grade=A, fantastic way to the start the new season

Season 2, Episode 2
The One with the Breast Milk

Funniest Line-â€œOh, I’m sorry, did my back hurt your knife?â€â€¦.Rachel

Nitpickof the episode-Not sure what the problem with Phoebe licking some milk off her arm was, but whatever. That cowboy/cologne story whatever the hell it was is one of the dumbest stories ever on this show. It has a late in the season, we ran out of ideas feelâ€¦and itâ€™s the second episode!!

Standout Character-Monica and Rachel are hilarious

Final Thoughts-I have to say the whole Monica/Rachel story is just handled very well.I can buy the whole scenario and the scenes were Rachel finds out is a season highlight. The story with the breast milk is, odd, but ok I guess I can live with that. What I canâ€™t live with is that Joey subplot. Who the heck thought this stupid idea up? This may have worked on another sitcom, but Joey is an actor, who cares about this cologne nonsense? The cowboy stuff is forced and not very funny, and they donâ€™t even do a decent job establishing what the heck Joey is doing working here!Â  I am glad they had Rachel and Julie talk at the end, since Julie wasnâ€™t doing anything wrongit was making Rachel come off as just evil. This scene helps that and was welldone.

Grade=B+,Solid except that asinine Joey story

Season 2, Episode 3
The One where Heckles Dies 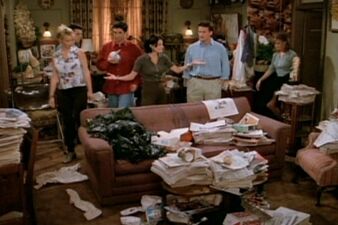 PlotcSummary-When Heckles dies the girls get custody of his apartment. Chandler fears he will end up old and alone. Ross and Phoebe have a dispute over evolution.

Funniest Line-â€œGoodbye, Mr. Heckles. We’ll try to keep it down.â€â€¦Chandler (ok itâ€™s not the funniest line but definitely a nice one)

Nitpickof the episode-This episode is very well written, but I do have to ask why Heckles would leave his possessions to the girls. Itâ€™s an obvious plotcontrivance. And Ross should know evolution is a theory, not â€œfactâ€.

Syndication Edit-More of Ross and Phoebe arguing
Final Thoughts-Last episode Monica and Rachel argued, this time its Ross and Phoebe.I always like how this series wasnâ€™t afraid to have the characters fight,because thatâ€™s what happens in real life you argue with your friends over silly things and move on. The argument is here is classic. Of course Chandler steals the show with his worrying, and the fact he called Janice is amazing. When she comes in pregnant itâ€™s a huge surprise.Â  Even she is allowed to evolve on this show. Itâ€™s funny to see this episode knowing where Chandler would end up, but at the time ending up all alone didnâ€™t seem socrazy. By the way there is a minor story regarding Monica and Rachel which also makes sense, after a whole year Monica still treats Rachel like a roommate andshe has every right to think of it as her place too. Of course Monica canâ€™t allow that because she needs complete control. This would be expanded on later but with Chandler.

Season 2, Episode 4
The One with Phoebeâ€™s Husband

Plot Summary- Phoebe reveals she is married to a Canadian ice dancer, Ross contemplates sex with Julie, Rachel tries to stop him

Nitpickof the episode- Rachel is way out of character trying to keep Ross from sleeping with Julie. I donâ€™t even understand, what is she hoping to accomplish? I get her being jealous but she shouldnâ€™t be actively keeping them apart.

Standout Character-Phoebe, her story is boring but that isnâ€™t the characters fault

Season 2, Episode 5
The One with Five Steaks and an Eggplant

PlotSummary-Chandler takes advantage of a wrong number; Monica gets a promotion, an argument between friends over money

Funniest Line-â€œOh, well, then you’ll have extra seats, you know, for all your tiaras and stuff.â€â€¦.Phoebe

Nitpickof the episode-Ok, what is up with the waiter in this episode? Someone thought it would be funny to give the guy a huge attitude. It isnâ€™t, especially when this is supposed to be a fancy place.

Standout Character-Monica; I guess I can relate to what happens to her in this one

Final Thoughts-I said before how cool it was that the creators allowed the characters to argue. Well, here we have a full blown example of that. Not only are they all fighting but there is even a schism in the group.Â  The key to why this works is at the end. Despite arguing for the whole show, when Monica reveals that she lost her job all of that is chucked out the window and they are all there to support her. I love that! Too bad as a whole the episode falls flat. The Chandler story is filler; it really goes nowhere and is even rather damning of the character to take advantageof a woman like that. I guess he does get his comeuppance when we hear how bad the sex was. Â And thatâ€™s it; Monicaâ€™sstory is really just meant to give weight to the money thing and doesnâ€™t matter until the very end.

Season 2, Episode 6
The One with the Baby on the Bus

Plot Summary-Joey and Chandler look after Ben after Ross has an allergic reaction which sends him to a doctor. Phoebe is upset when Central Perk hires a professional singer.

Funniest Line-â€œThatâ€™s a good plan Joe, next time we want to pick up women we should just go to the park and make outâ€â€¦.Chandler

Nitpickof the episode-Ross being afraid of needles seems kind of silly, and it feels like they were struggling to keep the story going between him and Monica

Standout Character-Chandler, his funny lines are what saves the episode for shear boredom

Final Thoughts-This is a standard episode but does have some big laughs, mostly from Joey and Chandler.Â  The whole Phoebe story is boring and really so is the one for Ross and Monica. Phoebe singing is always fun, and we get smelly cat here.Â However there is just nothing special about this one and since it was part of a crossover night for NBC I wonder if this episode was rushed. It sure feels that way. They made a strong episode out of the blackout episode, bu there they missed the mark.

Grade=C+,ever wonder if a whole episode was filler? Here you go!