Season 1, Episode 13
The One with the Boobies

FunniestLine-â€œIt was an accident. It’s not like I was across the street with atelescope and a box of doughnuts.â€â€¦Chandler

Nitpickof the episode-As someone who once aspired to be a Psychologist, I cannot standthe Psychiatrist in this episode. You never just randomly analyze people likethat without their consent and even worst share those observations with others! True analysis takes months, even years, of getting to know someone before youcan accurately determine a diagnosis. If he were real I would make sure heloses his license. I know, itâ€™s just a sitcom but this guy is an example of whypeople fear psychologists or psychiatrists and I have some experience with that.

Standout Character-Joey; despite my gripes it is nice to see Joey as more than justan idiot

Syndication Edit-We meet Roger earlier, at the top of the episode and other scene extensions

Final Thoughts-Ok I hinted at this before but let me get into it here. Whenever theparents got involved, usually, the show just wasnâ€™t the same. This episode isthe worst offender because not only are Joeyâ€™s parents in the episode, but thestory is about them! If youâ€™ve ever wondered why we didnâ€™t see this more, justwatch this episode and see. To make matters worse we get the B story about Chandler seeing Rachel naked that goes from funny to uncomfortable after thefirst commercial break. The C story has that jerk psychiatrist who does what heshouldnâ€™t, which is analyzing people without getting to know them first and giving them unsolicited opinions. He gives Psychiatrists a bad name and, well,I just hate that guy!Â  My vote for worstepisode of the season.

Grade=D+,watch the opening scene then turn it off!

Season 1, Episode 14
The One with the Candy Hearts

Plot Summary-Ross has his first date in nine years, Chandlerâ€™s blind date turns out to be Janice, The girls have a boyfriend bonfire

Funniest Line-â€œShe said she wants to slather my body with stuff and then lick it off.I’m not even sure what slathering is, but I definitely want to be a part ofit.â€â€¦.Joey

Nitpickof the episode-As someone who hates Valentineâ€™s Day, I totally appreciate theanxiety felt in this episode. However the tag where we find out the firemen arejerks seems a little unnecessary.

Standout Character-Ross; you really feel his pain in this one

Syndication Edit-There is more dialogue with the fireman, and we Chandlerâ€™s frustration ontheir date as he mimes shooting Janice

FinalThoughts-This is a really good episode, and I love how they did a Valentineâ€™sDay show because that is a tough holiday when youâ€™re single. We get the returnof Janice (and her first â€œOh My God!â€) which is a delight. Â The scene in the hallway with Chandler tryingto get rid of her is hilarious. Rossâ€™s story works because weâ€™ve met Carol andI love the chemistry between them here. You can tell they probably would havestayed happily married forever, if not for the minor detail that she is alesbian. This episode handles this beautifully! Finally, the boyfriend bonfireworks a lot better than the girls spying on George Stephanopoulos a fewepisodes back.

Season 1, Episode 15
The One with the Stoned Guy

Plot Summary-Monica cooks a gourmet meal for a restaurateur looking for a new chef,but things do not go as planned. Ross tries to learn how to use dirty talkwhile Chandler quite his job after being offered a promotion.

Funniest Line-â€œOh! I see. And I’ve sort of been maintaining my amateur status so that Ican waitress in the Olympicsâ€â€¦.Rachel

Nitpickof the episode-I love how Monica is devastated by how the interview (or whatever it was) turned out. She should have been counting her blessings! Nothing wrong with wanting something but you also want to get the right opportunity andnot settle for the first awful thing that comes along. It also would have beennice to see Rossâ€™s attempt at dirty talk, having him relate it to Joey isnâ€™t the same.

Standout Character-Monica; she will do many mean things through the course of theseries because her ego gets in the way of others feelings at times but we stilllike her. This works because Courtney Cox knows how to play Monica so she isclearly not intending to be evil. For example in this episode she hires awaitress and doesnâ€™t even ask Rachel. But Monica gets her payback when thewaitress quits and she has to go to Rachel anyway.

Syndication Edit-The tag, which featured Phoebe giving the restaurateur a little payback onthe massage table. The opening where Rachel gives Monica a coffee with aneraser in it. Chandler getting called in to see his boss.

Final Thoughts:-Good thing that Jon Lovitz is a pro because if you took out the wholeMonica story this episode was a little weak. Ross learning how to use dirtytalk was a real boring story. Yeah, the scene where Chandler walks in on Joeyteaching Ross is a classic. But the story as a whole is a dud, and feelsremoved from the rest of the episode. Chandlerâ€™s story is good in the start butthe quick resolution almost feels as if the writers gave up. But thankfullythis story becomes very important for the character so I can let it slide.Monicaâ€™s story is great because this is important to her character, and as I saidJon Lovitz is hilarious in this part.

Grade=B+,Lots of funny gags but the Ross story weighs the episode down

Funniest Line-â€œThis is unbelievable. It’s been like a half an hour. If this was acartoon, you’d be looking like a ham right about now.â€â€¦..Chandler

Nitpick of the episode-As much as I loved the Mad About You crossover, the fact thatJamie and Fran couldnâ€™t figure out it wasnâ€™t Ursula is a little silly. I guessthe same could be said for the doctors Monica and Rachel date not realizingsomething was up, although that is a funny scene.

Standout Character-Tough one, everyone gets something to do and each handles it verywell. We get to know each character a little more in this one which was verywell done.

Syndication Edit-Lots of scene extensions, including Rachel with talking to her dad on thephone and the conversation between Ursula and Phoebe was longer

Final Thoughts-This is a really good episode, even the stunt casting canâ€™t hurt it. Of course this and the next few episodes will have more of Marcel, and itâ€™s not that he hurt the show itâ€™s just that he took attention away from the main characters weâ€™re supposed to care about. The scene where Monica and Rachel â€œchange placesâ€ is hilarious, and the ending is kind of bitter sweet I willadmit it. Even the stuff with Phoebe and Ursula is handled really well and notjust for laughs (like it would be later on). Just a very strong, well-writtenshow demonstrating that these characters are more than punchiness, they arepeople dealing with real problems. What more do I have to say?

Season 1, Episode 18
The One with All the Poker 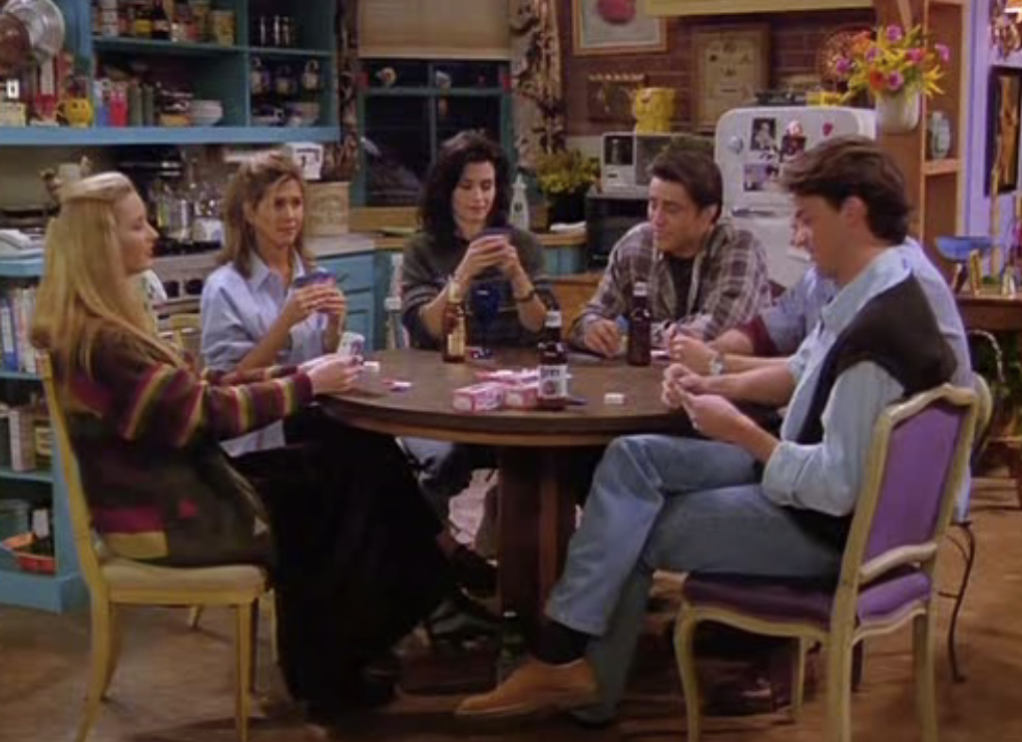 Plot Summary-The girls convince the guys to teach them how to play poker. Rachel decides she wants a job in fashion.

Funniest Line- â€œOk, the fifth dentist caved and now theyâ€™re all recommending Trident?â€â€¦Chandler who has some great lines in this one including this

Nitpickof the episode-The only problem with this episode is that we will NEVER see them playing poker again. Although Rossâ€™s competiveness will definitely be back. But as a standalone episode itâ€™s still great. (I know I said nocontinuity mistakes, but this one bugs me).

Standout Character-Rachel, nice to see her finally growing past that whiny rich girl phase she started the series in. In the pilot she didnâ€™t care that she wasnâ€™t qualified for anything, but here she is crushed when she doesnâ€™t get the job she wants.

Syndication Edit-We get a second lesson from Monicaâ€™s aunt which is kind of important andleaves a small plot hole in the syndicated episode, we also see the guys dancing to Marcelâ€™s favorite song,

Final Thoughts-If I didnâ€™t love this show before this episode, I sure as heck did after. This was just a great episode because we really see how the characters play off of each other. This is also one of the first times we really establish Joey as dense, how exactly do you confuse a 3 card with an 8? Chandler has several classic lines and some good character development makes this another early classic.

I’ll be back later this week for the conclusion of the first season!