Season 1, Episode 7
The One with the Blackout

Plot Summary-There is a blackout in the city. Chandler is caught in an ATM vestibule, while the rest of the gang tries to cope with the darkness. Rossdecides to finally ask Rachel out but that is disrupted by an Italian guy.

Funnies tLine-â€œI’m trapped in an ATM vestibule with Jill Goodacre. Is it a vestibule? Maybe it’s an atrium. Oh, yeah, that’s the part you should be focusing on, youidiot.â€â€¦.Chandler

Nitpickof the episode-While Chandler is hilarious in this one, I have to wonder what made him wait so long to talk to Jill considering how long they were stuckthere.

Standout Character- Chandler, duh! He just shines in this one, if you didnâ€™t like him before you will after this episode.

Syndication Edit-Jill talking to her mother while Chandler thinks about mothers, the blackout hits just as Phoebe is about to sing. Sometimes these edits help, in this episode Rossâ€™s encounter with the cat goes longer, a little too muchlonger

Final Thoughts-This was intended to be part of an NBC cross over event called â€œBlackoutThursdayâ€. Mad About You began the story which picked up here. The funny thingis, this is a great episode despite it being and event show! Chandler ishilarious, and we get more development in the whole Ross & Rachel thing. Iwasnâ€™t thrilled with Paolo but he didnâ€™t last long anyway. This series worked best when it was just the six of them, and this is a good example (ok Chandler is absence but his scenes were hilarious). Strong episode when they could have just phoned it in.
Grade=A+,first classic of the series

Season 1, Episode 8
The One where Nana Dies Twice

Funniest Line-â€When I first met you… I thought maybe, possibly, you might be… but then you spent Phoebe’s entire birthday party talking to my breasts, so then Ifigured maybe notâ€..Rachel

Nitpickof the episode-Not sure why the show became all about The Gellerâ€™s for this episode, but thank goodness for Chandlerâ€™s story to keep the show asâ€œFriendsâ€.Â  The final scene in the coffee shop is the only really good one in the episode.

Standout Character-Chandler, I hate to do this but he is the only one who is really given anything to do in this one

Final Thoughts-This episode almost has only one story, and really Chandlerâ€™s story barely counts. Maybe that is why this episode feels off. Do we need Ross and Monica talking with their parents? We do get some good moments like Monicaâ€™sheart to heart with her mother, and when a drugged up Ross confesses his feelings to Rachel who doesnâ€™t get it. Overall this episode just doesnâ€™t fee llike an ordinary episode and that hurts it. Chandlerâ€™s story is funny but I doget tired of the gay joke in sitcoms.
Grade=C-,just an odd one

Season 1, Episode 9
The One where Underdog Gets Away 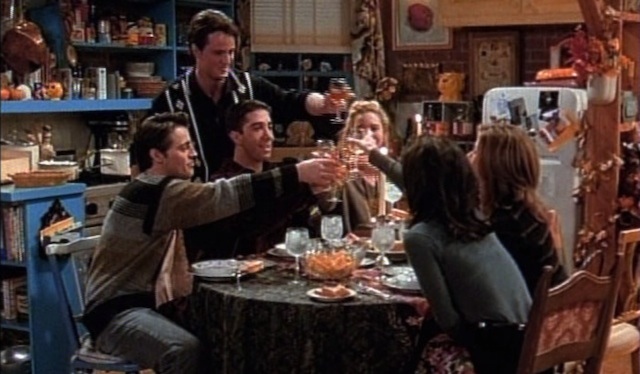 PlotSummary-Rachel wants to go skiing, Joey regrets becoming a model for a health clinic, Monica tries to throw the perfect Thanksgiving but an Underdog balloon disrupts her plans

FunniestLine- â€œAnd everyone’s telling me, you gotta pick a major, you gotta pick amajor. So, on a dare, I picked paleontology. And you have no idea what I’msaying, because, let’s face it, you’re a fetus. You’re just happy you don’thave gills anymoreâ€â€¦Ross

Standout Character-Monica, she steals the show with her rant about how she wast rying to make the perfect Thanksgiving and itâ€™s ruined. She rants until her voice traces off. Of course the end of that scene has Chandler pointing outthat only dogs could hear her.

SyndicationEdit-Ross complaining about the yams, the very end of the episode is often cut with Joey tearing down one of his posters

Final Thoughts-The first Thanksgiving episode and itâ€™s a classic! Everyone is on there A game with this one. I canâ€™t think of one character that isnâ€™t hilarious. We even get a great Blossom joke from Chandler! We also learn about Chandlerâ€™s hatred for Thanksgiving not to mention the fact his parents are divorced. It’s funny to see this early show where the friends still weren’t that close, since later spending Thanksgiving at Monica’s would be a given and her it’s Option B for everyone. There are only so many ways I can say this was a great episode, so Iwill just leave it at that.
Grade=A,The first Thanksgiving show set the standard for the rest to come

Season 1, Episode 10
The One with the Monkey

Plot Summary- Ross gets a monkey, Phoebe finds a new love in a scientist guy, and Chandler suggests a no date pact on New Yearâ€™s Eve

Funniest Line-â€œI can’t believe he hasn’t kissed you yet. I mean God, by my sixth date with Paolo, he had already named both my breasts! …Ooh. Did I justshare too much?â€â€¦Rachel

Nitpickof the episode- I just donâ€™t get the date pact story in this one. I never understood why so many people worry about having a date for New Yearâ€™s.Valentineâ€™s Day, yeah I get that, but does is it really matter on New Yearâ€™s?Why canâ€™t they just hang out with some friends and thatâ€™s that?

Standout Character-Phoebe, you totally believe she has fallen for David and feel forher in the end

Final Thoughts-That damn monkey! Why the creators decided to bring Marcel in I will never know. I guess they didn’t have faith in the show either. Thank goodness he didnâ€™t stay around long. Anyway this is a pretty good episode but one thing kind of drags it down. No, it isnâ€™t the monkey itâ€™s having Rachel get into a fight at the airport. I mean, really? She couldnâ€™t just come in all depressed because Paolo missed his flight? Â Despite that we do get some great character moments. It is nice to see Phoebe fall in love even if she did get her heartbroken. Thankfully David would come back a few years later which makes her story here important to her character and not just filler.
Grade=B+,the episode is more good than bad

Season 1, Episode 11
The One with Mrs.Bing

Plot Summary-Chandlerâ€™s mom makes a move on Ross, Chandler is forced to deal withhis mother, Monica and Phoebe send a guy to the hospital

FunniestLine-â€ You kissed my best Ross! Or something to that effectâ€â€¦.Chandler

Nitpickof the episode-The Monica and Phoebe story, every second of it, is just dumb filler

Standout Character-Ross; he does a good job in this episode expressing his frustration that Rachel is still seeing Paolo.

Final Thoughts-I HATED the Monica and Phoebe story. I am not against them arguing,but over a comatose guy in a hospital? It just didnâ€™t work. Speaking of things that didnâ€™t work, letâ€™s talk about the other story in this one. There is just something wrong with the whole story about Chandlerâ€™s mom kissing Ross. I will discuss this more on another episode, but including the parents always seemed to suck the life out of the episodes and it does here. Chandler also comes off a little too mean spirited in this one. This isnâ€™t the worst episode of the season, but itâ€™s far from being the best.
Grade=C-

Season 1, Episode 12
The One with the Dozen Lasagnaâ€™s

Plot Summary-Monica makes a dozen lasagnaâ€™s but is stuck with them, Paolo makes amove on Phoebe, Ross doesnâ€™t want to know the sex of his child

Nitpickof the episode-I never understood why Ross wouldnâ€™t want to know the sex of his child. What is it bad luck or something? And why is Phoebe, a vegetarian,eating the lasagna at the end?

Standout Character-Rachel, her response to discovering Phoebe got hit on by Paolo was very nicely done

Syndication Edit-One of my favorite openings when the gang starts to spontaneously sing theOdd Couple theme. Of course this was an easy syndication cut. Ugly naked guysighting, he is making shadow puppets.

FinalThoughts-Solid episode, especially after the last one. Itâ€™s nice to see the end of the Paolo arc and his departure was handled very well. We also get the Fuse Ball table which would quickly become a fixture of the show. We also learn that Monica is competitive, something we see much more of later on. I guess I couldmention that the whole Rachel giving up on guys thing at the end is just another road block in the Ross/Rachel relationship, but I will get redundant ifI list them all.
Grade=B+

Come back next week as we conclude our look at the amazing first season!