This screenshot demotivational poster is highly, utterly, indubitably, and absolutely Anti-Sango. Sit back, relax, and indulge yourselves in the shame Sango has thrown herself in.

Oh, Sango. Sometimes I have to keep asking myself, how can a female demon slayer so formidable as she is be so stupid and indubitably pitiful? The answer lies in how ashamed she should be for being complicit in her maltreatment towards Inuyasha, her horrid actions after her introduction, being nothing more than Kagome’s humanoid robots, and generally being nothing but talk while not walking the walk as a strong warrior. For somebody who is supposed to be physically strong, it is amazing how useless Sango becomes against a much stronger foe. Case in point would be Garamaru who trapped her, Kagome, Miroku, and Shippou in his cocoons, thus causing Inuyasha to fight tooth and nail to try to get them out of there. She may be human, but she was supposed to be the strongwoman of the group. It just shows that she never had compassion toward Inuyasha and saw him as a pathetic simpleton. Sango needs to have a taste of her own shameful medicine because that is what she should be adorned with for all the harm she has done and all the rubbish that she was complicit in.

Sango has proven herself to be the biggest conundrum I have ever seen because of how she may be physically strong, but she is thoroughly pathetic when it comes to being critical of who she thinks she is following. We are looking at a supposed warrior who may demonstrate physical prowess in the heat of battle. However, when it comes to using common sense, thinking for herself, and assessing the situation people less fortunate than she is are in, she fails on all of those accounts. She presents herself as this loving older sister to Kohaku when she should have learned that he was not psychologically prepared to be inducted in this field and keeps hating herself for losing him to Naraku’s machinations. She even presents herself as one of Inuyasha’s staunchest friends when she has done absolutely nothing to understand his point of view let alone accept him as her equal. Instead, she is nothing more than a pathetic hypocrite who truly does not understand Inuyasha as an individual, does a terrible job at being an understanding older sister, and is just a self-hating wench who is inferior to Inuyasha as a warrior.

To add further to her shamefulness is how she still sticks by Miroku despite his atrocious actions towards other women especially towards Koharu in Episode 41. If you were not aware of what he did to Koharu in that episode, he asked her to bear his child when she came of age. Mind you, the douchebag was 15 years old, and Koharu was all but 11 years old. Yes, Sango was justifiably pissed with him, but she should have dumped his pathetic ass. Instead, she continued to stick by him because of reasons that are beyond my understanding let alone control. Perhaps the only reason why she remained with him is because she too is nothing but one of Kagome’s knee-crawling posse like her husband and surrogate son Shippou. Despite Miroku groping Sango at inopportune moments and womanizing with every and any girl and/or woman, she could not end up moving on from him because the only thing they have in common aside from their hatred toward Naraku is how pathetic they are together, especially when it comes to constantly taking Kagome’s side and not understanding Inuyasha’s loneliness, guilt, plight, and/or pain.

Sango has brought more shame than glory to her name both as a demon slayer and as a person. Her self-loathing over Kohaku’s initial passing and eventual brainwashing through Naraku make her a truly pathetic individual with no guts and no glory. While she may be a physically strong warrior, she is mentally and psychologically weak choosing to be nothing more than a sad follower of Kagome instead of thinking for herself, standing up to her, calling her out on her abusive actions toward Inuyasha, and realizing that Inuyasha was far more than meets the eye in terms of his loyalty and honesty. Even more shameful is her choice to end up with the perverted monk known as Miroku. Despite her knowing full well of his lascivious actions, she chooses to stay with him for reasons beyond my understanding. Perhaps, Miroku knows that Sango is the only woman he can have as his breeding mare, and look what happened. The fact that Sango would end up sacrificing her life for a crooked hypocrite and pervert demonstrates how truly pathetic she is. She may as well end up as a rotten corpse for all I care.

I hope you enjoyed this, and I will see you in the next submission. Take care, stay safe, and do not be a pathetic floozy like Sango, everybody.

The Pathetic, Two-Bit, and Stupid Floozy from Inuyasha belongs to Rumiko Takahashi and Sunrise. 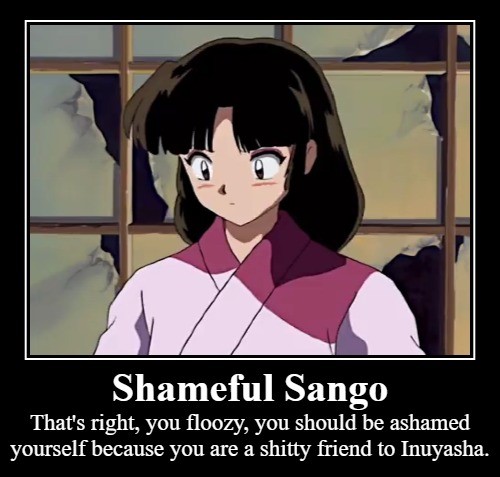