This screenshot demotivational poster is highly, utterly, indubitably, and absolutely Anti-Shippou. Sit back, relax, and understand why I take great issue with Shippou’s undying ingratitude, especially towards Inuyasha who, despite being rough on him, saved his life multiple times.

People say that Shippou is annoying because he is a whiny tagalong kid who gets on the main hero’s nerves and is utterly useless in battle most of the time. While I can agree with those statements, the main issue I have always had with Shippou is his ingratitude. Not once did he thank Inuyasha for avenging his father’s death from Hiten and Manten. Not once did this little shit ever acknowledge how much loneliness Inuyasha had to endure throughout his life until he found Kikyou. Not once did he ever show any form of empathy let alone compassion, as he reveled in taking pot-shots on Inuyasha. Shippou was nothing more than an ungrateful, uncouth, horrid, bad-tempered scumbag who has none of my sympathies just because he was the tagalong kid. Once again, the excuse of him being a child will always fall deaf on my ears because there have been better child characters than Shippou who show more gratitude than this pathetic turd ever did. Therefore, in the words of Jack Albertson’s Grandpa Joe, Shippou is a crook, a cheat, a swindler, and an inhuman monster complicit in smashing Inuyasha’s need for companionship.

Shippou’s ingratitude is cancer that permeates into something uglier than the human eye can see. The most egregious example of Shippou’s ingratitude towards Inuyasha was Episode 100 because of how nonchalantly he states that Inuyasha can feel free to brag about how he saved his useless behind, Miroku’s hypocrisy, Sango’s pathetic behind, and Kagome’s selfishness as well as pettiness. This is especially horrible for Shippou, considering that he and the other three losers were trapped in Garamaru’s cocoons, thus making Inuyasha fight tooth and nail to get them out of there. While inside Garamaru’s cocoons, the four losers were treated to their own traumatizing nightmares until Inuyasha reminded them that they had a lot more to live for. Instead of genuinely thanking Inuyasha, Miroku, Sango, Kagome, and Shippou acted like nothing more than a gaggle of liars, hypocrites, mountebanks, and deceivers. Shippou’s line of letting Inuyasha “brag” when he was telling the gospel truth made him nothing more than a vindictive ingrate without any shame, humility, modesty, and compassion in his puny body.

What correlates with Shippou’s ungratefulness, ingratitude, and general deficiency in showing any sliver of thankfulness is his pride which turns into pathetic cowardice. He thinks he is this great trickster and warrior, but he is all talk and no action. The little actions he has are poorly executed attacks and transformations that have become nothing more than jokes, and I do not mean that in a positive light. I understand that he is supposed to be the comic relief character, but I found nothing hilarious or charming about his vindictiveness and douchebag attitude toward Inuyasha or anybody who he thinks is beneath him. His very young age should never excuse him for such meanness let alone cruelty towards anybody he thinks is beneath him. Even when he thinks he is capable of fighting on his own, his true colors show that he is nothing but a coward with no guts and no glory. The many occasions where Inuyasha saves him may as well be all for naught because all Shippou has learned from Miroku, Sango, and Kagome is how to take advantage of Inuyasha’s strength and loyalty to make him look and sound like a fool.

The more Shippou’s utter lack of gratitude becomes more pronounced, the more putrid he truly is as a character and as an individual. There is nothing to root for or to cheer for about how awfully he behaves, especially towards Inuyasha who has been saving his and his so-called companions’ behinds from danger while taking pot-shots at him. He has no right to state that Inuyasha can brag all he wants because it is true that he has been risking his life for their petulant selfishness, specifically when Shippou is the worst of the bunch, given his condescension and total lack of empathy towards anything Inuyasha had to endure. Shippou being the tagalong child does not excuse him for his awful behavior, and he should be punished accordingly. A light sentence would have Eikichi Onizuka from Great Teacher Onizuka give him a wedgie and spank him with a ruler to teach him some manners. As for a graver punishment, I would gladly permit the Psycho Rangers from Power Rangers in Space and Power Rangers Lost Galaxy to hunt him down, exterminate him, mutilate him, and mount him as one of their trophies.

I hope you all enjoyed this, and I will see you in the next submission. Take care, stay safe, and do not be an ungrateful brat like Shippou is everybody. 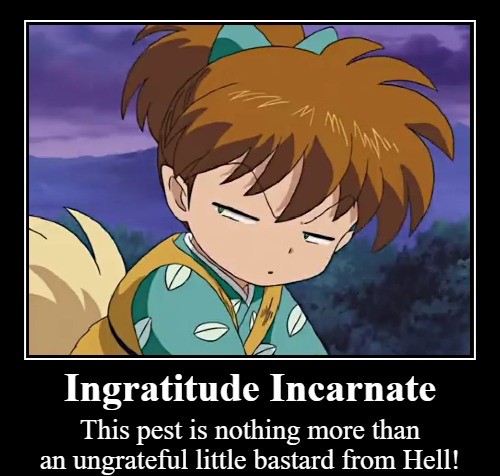 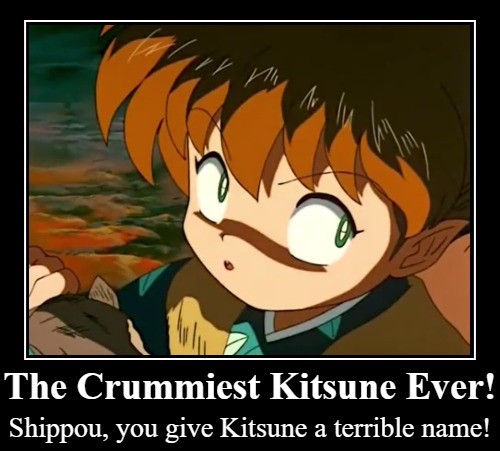