This screenshot demotivational poster is highly, utterly, indubitably, and absolutely Anti-Shippou. Sit back, relax, and open your minds to understand why this pathetic turd is not only unlikeable but also reprehensible.

I can definitely hear the people, most specifically the triggered Shippou fans and defenders, in the comments going “This guy hates Shippou waaaaahhhh!!!!!”, “Shippou is only a fictional character waaaahhhh!!!!!”, and my personal favorite “He’s a child-hater waaaaahhhhh!!!!!!” So, does that mean I have to empathize with him? No, because he is a despicable little turd with an equally horrible attitude. Furthermore, do not even give me that excuse that Shippou will grow out of his ways because from what the original show, The Final Act, and Yashahime have demonstrated, this despicable little turd never changed. What is worse is that Shippou has not once demonstrated any form of gratitude or respect towards Inuyasha who has saved him multiple times and has never understood how painful it was for him to lose Kikyou, who he swore to protect, despite her wanting him to be a full human for her. There were several occasions where Shippou deserved those punches to the head by Inuyasha because he could never respect his boundaries and chooses to be nothing more than a vindictively mean-spirited pain in the behind.

I know that it is a challenge to write tagalong kid characters in terms of making them appealing, charming, and likable. I am also aware that it is a challenge to try to make tagalong kid characters far more useful than they are and can stand toe-to-toe with their older companions and surrogate family. However, Shippou is one example of what wasted potential and being painfully grating feel like. He barely takes responsibility for his words and actions and always expects to be coddled by Kagome, despite him being in the wrong nearly most of the time. It also does not help that his smug attitude and his bratty petulance come off as charmless and devoid of any lovability let alone compassion. There was not one moment where I felt sorry or bad for him because his actions and words reflect how much of an insufferably pathetic douchebag he is. Furthermore, his cowardice to try to fight in battle is off the charts. Every time he tries to fight, this little turd just runs away like the pathetic loser that he is all while being a pathetic smug bastard towards Inuyasha who is stronger than he will ever be.

His unlikability also extends to him having a rotten personality. I know children are not at their most wonderful when they are young, but Shippou’s rotten and smug attitude shows how much needlessly cruel he is. For instance, he does not show concern for Inuyasha when he does all the work to work on his Tessaiga or when he has to fight tooth and nail to retrieve ingredients to cure Kagome from her cold. I also know that Inuyasha cannot stand it when Shippou bothers him or peeves him, but he had every right to make Shippou realize that there are some boundaries he should never cross. Even when Inuyasha was brutally honest about how Kagome approached him when she kissed him in Movie 2, Shippou still had the nerve to think that Inuyasha was not fully grown up, thus making me affirm that this turd-hole has no business in lecturing him when he himself is not mature either. Perhaps what is more depressing about Shippou is that his smugness as a full fox Yokai makes him think he is above Inuyasha being a dog Hanyo but is just all talk and barely action.

To say that Shippou is unlikable is a mere understatement. He is a deplorable little shit stain who deserves none of my compassion and all of my wrath. His smugness towards Inuyasha is insufferable and has crossed the line one too many times to the point where he never learns his lesson. The excuse of him being a tagalong child is so overdone to the point where it is impossible to not only dislike him but feel disappointed in his lack of character growth let alone growing compassion. His smugness, smart mouth, and antics towards Inuyasha were never hilarious and served to only aggravate me and hope that this little crap-head ends up being thrown off a cliff just like what Heihachi Mishima did to Kazuya Mishima from Tekken. The catch is Shippou is stripped of his fox magic for abusing them and not being useful in battle, thus making him fully deserving of that great big drop down the cliff because that is the punishment he deserves. At the end of the day, Shippou is a loser who I will gladly eviscerate again and again.

I hope you all enjoyed this, and I will see you in the next submission. Take care, stay safe, and never be unlikable like Shippou is, everybody. 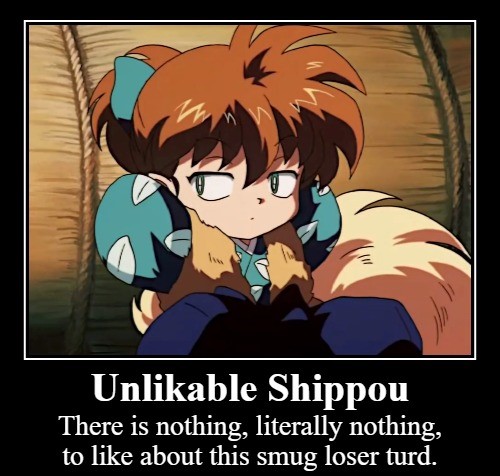