I am quite excited to be talking about Cate Blanchett’s take on Lady Tremaine today.  So far during this event, I have looked at two versions of Cinderella’s Stepmother and will look at two more.   As I established yesterday,  the 2015 remake of Cinderella does pay homage to the animated movie but it is not a beat-for-beat reshot of the animated movie as we have been seeing with the more current remakes.  And this is seen with the 2015 version of Lady Tremaine, while she is just as evil and sister as her animated counterpart but this movie does enough to make this version of Lady Tremaine different enough from what came before.  As I’ve said time and again about this movie, the thing that makes it work is how it pays tribute while being its own thing.  With this out of the way, let’s begin. 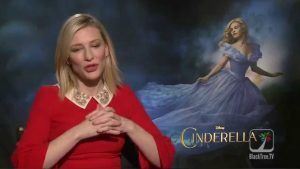 Cate Blanchett has done quite a few villainous roles including playing Hela in one of my least favorite MCU entries but I am not here to discuss that.  Her turn as Lady Tremaine is as close to perfect as I could hope for a live-action take on a Disney villain.  In my humble opinion, Cate Blanchett’s Lady Tremaine should be as well remembered as Glenn Close’s Cruella.  I don’t think that’ll be the case as this movie is more than likely to get lost in the sea of bad remakes.  I find this to be quite disappointing as it is a rather great turn that makes you hate Lady Tremaine every time she appears.

We first see Lady Tremaine moving into the house Ella, her mother, and her father lived in and at first, it seemed as though Lady Tremaine didn’t have any ill will towards Ella but hatred consumed her over time and this is something I’ll go into more detail about during the Relationship portion but the relationship seemed if not one of love but one where both parties were trying but once Ella’s father passed away, her animosity towards Ella grows stronger and that leads to it becoming all-out anger.  A perfect example of this is how she moves Ella out of her old bedroom and into the attic but she attempts to play it off as something that would benefit the family.

Much like the original Lady Tremaine,  the 2015 version has a rather high opinion of herself.   In some ways, it seems more blatant.  While the original Lady Tremaine had a mean streak,  the way Blanchett plays her version of Tremaine is just oozing with meanness.  She is sadistic and just plain evil with how often she laughs at Ella.  Before I get to that though, there is a line I want to bring up that highlights another aspect of her character.

Once upon a time, there was a *beautiful* young girl who married for love. And she had two loving daughters. All was well. But, one day, her husband, the light of her life, died. The next time, she married for the sake of her daughters. But that man, too, was taken from her. And she was doomed to look every day upon his beloved child.

Lady Tremaine once did believe in love but after having two husbands die, she has turned on love and sees Ella as a reminder of the pain she has suffered.  It speaks to how bitter she has become.

I feel this movie truly highlights how much of a bully Lady Tremaine is.  One of the biggest examples is how she goes along with her daughters in calling Ella, Cinderella.

I’m not positive but I do think this is a callback to how in some earlier versions of the story such as Cinderella is just a cruel nickname.  From what I remember and I believe this comes from the Perrault version,  she was called Cinderella because she slept by the fireplace and the cinders would get on her, thus the name. 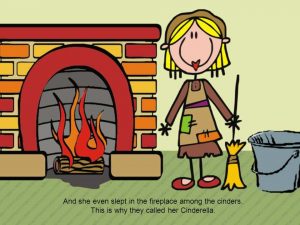 This is also highlighted by how the people who love Ella such as her Fairy Godmother use her real name whereas the Tremaine’s only refer to her as Cinderella.   They’ve stripped her of her identity and made her feel like nothing in her own home.  This seems like a good time to discuss her relationship with Ella.

The relationship between Lady Tremaine and Ella is one of cruelty on the side of Tremaine to Ella.  Nothing Ella does for her stepmother is ever good enough and doesn’t view Ella as part of the family as seen in the clip that I posted.  The only time Lady Tremaine considers Ella part of the family is when she is forbidding her from trying on the glass slipper.   This is such a powerful moment for Ella when she stands up for herself against Lady Tremaine.

Lady Tremaine: I am her mother.

Cinderella: You have never been… and you never will be my mother.

I believe this is something so many Cinderella fans love, getting to see the young girl stand up for herself against her abuser.   So many people misunderstand Cinderella to be a doormat when that isn’t true at all, she is a victim and while this version of Ella does have someone she can vent to, she still feels trapped and in a sense feels obligated to say considering this is her childhood home.  The line of Ella telling Lady Tremaine not being her mother holds a lot of weight in this version as we spend some time with Ella’s mother before Lady Tremaine enters the picture and we see the night and day difference between the two as the love Ella’s mother has for her is so genuine.  After all, her mother is the one that instilled the lesson of the movie into her daughter. 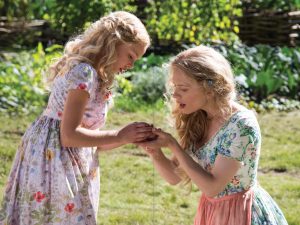 Have courage and be kind

Those words sum up the character of Ella and why people love Cinderella in general as it is braver to be kind even to those that want to bring you down.  This is something I’ll touch upon more in the Fate section but it felt important to bring up here as it truly helps in highlighting the two different motherly relationships Ella has throughout her life.

I don’t know if this is true to the original text but this movie takes the idea of Lady Tremaine wanting to marry off her daughters and expands upon it by looking for a means of financial security.  This is a genius idea for the character of Lady Tremaine as it speaks to the sense of desperation she has as she is in dire straits when it comes to money.  After all, the reason Ella took on all the tasks inside the house or rather was forced to is that Lady Tremaine let go of all the house’s staff.   Now, this is only one part of her goal,  her goals change a bit after she learns Ella is the one that Prince Kit had been dancing with.   She wishes to be named the head of a royal household and she’ll let Ella marry the prince.

This is a moment where Lady Tremaine feels at her most evil.  I have to believe part of it comes from how she is hidden in shadow holding the glass slipper in her hand. This is a moment where your heart drops for Ella and you fear the worst is about to happen.   Having said this, I want to switch around these next two categories as I believe that this leads to what I consider her Most Evil Deed.

Now,  it is true that Lady Tremaine did this in the original animated movie, and while it does hold a bit of weight, it’s a last-ditch effort there whereas it feels calculated and that makes it even crueler.  She had the glass slipper with her the entire time while talking to Ella and she capped off their interaction by breaking the slipper by smashing it against the wall.  Watching the slipper be smashed is seeing Ella’s hopes and dreams of a better life being smashed as Lady Tremaine looks to find ways to keep her trapped. 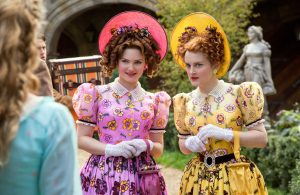 I’ll be honest and say by making The Grand Duke a secondary antagonist,  the role of the Stepsisters was greatly reduced.  They still served a purpose in the story but weren’t as important in this version of the story as other takes have been.  At best,  they mostly feel the role of comedic relief and that’s fine but there isn’t anything to truly latch onto with these Stepsisters.  Also, I’ll be honest and say that when they tear Ella’s dress, the pain just isn’t there compared to what the Stepsisters do in the animated movie.

It’s missing that kick to the gut the original has where I sometimes find myself weeping alongside Cinderella after what she went through.

That scene works overtime to make you hate the Stepsisters whereas here I’m left with a feeling of “that’s it”.   Perhaps they didn’t want to go as hard as in that scene but I find that to be a mistake. On the same token of them feeling a bit reduced, the movie seems to acknowledge it with this line.

She had hoped to marry off one of her beautiful, stupid daughters to the prince

The movie seems to know that they are nothing more than comedic relief with that line.

Lady Tremaine and her daughters alongside The Grand Duke are banished from the kingdom.  I touched upon this when looking at The Grand Duke and how that is a fitting punishment and while that is her ultimate fate, that isn’t what I want to focus on here.  I instead want to touch upon Ella’s reaction and what she says to Lady Tremaine at the end of the movie.

Those three words say so much about the character of Ella that even after everything Lady Tremaine had Ella through, Ella can find it in her heart to forgive this woman.  Hearing that destroys Lady Tremaine.  It’s not a moment of realization for her but rather one that shows the difference between Ella and Lady Tremaine.

Ella was taught by her parents that kindness is a strength and she displays it even to the person that has made her life a living hell.  It is such a powerful moment as Lady Tremaine has nothing to say to Ella at this moment.  It’s as if at this moment,  she knows that Ella is right.  It also calls back to an earlier line from the movie where Ella confronts her stepmother about her mistreatment.

Cinderella: [after Lady Tremaine shatters her glass slipper on the wall; horrified and angry] Why? Why are you so *cruel*? I don’t understand it. I’ve tried to be kind to you.

Lady Tremaine: You? Kind to me?

Cinderella: Yes. And though no one deserves to be treated as you have treated me. Why are you doing it? WHY?

Ella is asking her a question I know so many people who have been abused would want to ask those that have hurt them.  This combined with Ella saying she forgives her stepmother makes their interactions so powerful.

Is Lady Tremaine A Good Villain

Yes, she is a great villain.  As I have said throughout Cate Blanchett delivers a stellar take on Lady Tremaine and is arguably the only good remake villain to come out of these movies.  Everything just comes together to make you hate her so much. And that is what you should feel with the character of Lady Tremaine as she is such an awful person.