This screenshot demotivational poster is highly, utterly, indubitably, and absolutely Anti-Miroku as well as Anti-Kaede and Anti-Shippou. Sit back, relax, and revel in the evisceration I have in store for these pathetic excuses of companions for Inuyasha and my alternatives in the form of eleven Red Power Rangers who would ensure healing, genuine trust, authentic friendship, and true brotherhood far more than what the douchebag known as Miroku can offer.

If you thought one pathetic dickhead was not enough for Inuyasha to suffer with, try two more dickheads who are just as pathetic as each other. I have made my sentiments clear about Miroku being an absolute hypocrite, liar, deceiver, and moocher really clear which are all attributes transferred into him being a terrible friend to Inuyasha. Not helping him are Kaede the insolent old hag who constantly favourites Kagome and is always living under Kikyou’s shadow and Shippou the vindictive little ingrate who always runs his mouth when the situation is least appropriate. The main problem I have with Kaede, Shippou, and especially Miroku is how they treat Inuyasha like a second to third-class citizen because of his huge chip on his shoulder regarding his painful past while constantly putting Kagome on a pedestal just because she can sense the Shikon Jewel shards. Even when Inuyasha is injured, Miroku has the gall to further hurt him by hitting him on the head with his staff or physically batter him all while telling him to calm down or show more “respect” to Kagome when Inuyasha himself has been dealing with guilt from losing Kikyou as well as trying to save his, Kaede’s, and Shippou’s ineptly futile behinds, and Miroku himself is no saint either, given his track record of womanising to the extreme and not being a strong fighter by any stretch of the imagination. Therefore, these miserable excuses of companions and magnificent losers are neither worthy of Inuyasha’s time let alone his undying trust, respect, allegiance, and loyalty.

Rather than having Kaede’s incompetent and wrinkled bum playing favourites with Kagome, Miroku’s physically bullying of Inuyasha’s, and Shippou’s vindictive mouthiness being akin to a cancer, it would be great for Inuyasha to get rid of these three lousy excuses of companions and bring in some genuinely real friends, caring brothers from other mothers, and loyal companions to soothe him, comfort him, give him the reassurance he needs, and be the greatest people that he has and will always have in his life. Step forward Jason Lee Scott the Red Tyrannosaurus Mighty Morphin Power Ranger, Aurico the Red Alien Ranger from Aquitar, Tommy Oliver the Red Zeo Power Ranger as well as the first Red Lightning Turbo Power Ranger, Theodore Jay “TJ” Jarvis Johnson the second Red Lightning Turbo Power Ranger, Andros the Red Space Ranger, Leo Corbett the Red Galaxy Power Ranger, Carter Grayson the Red Lightspeed Rescue Power Ranger, Alex Drake the first Red Time Force Power Ranger, Wes Collins the second Red Time Force Power Ranger, Eric Myers the Quantum Power Ranger, and Cole Evans the Red Wild Force Power Ranger coming to Inuyasha’s aid as the true companions and brothers from other mothers he desperately needs. As for Kaede, Miroku, and Shippou, they might as well depart from Inuyasha’s life and never ever come back because they have done more damage to him than good.

With the eleven Red Power Rangers by Inuyasha’s side to be the best brothers they can be, they would do wonders to give him the solidarity, warmth, strength, compassion, trust, honesty, and joy he needs so much in his life. This is especially true when it comes to tending Inuyasha’s wounds the best way they can with tender loving care and giving him their undivided attention to the nines. All of these Red Power Rangers would prove themselves to be far more knowledgeable about medicine, healing, tending wounds, and dressing even the direst of injuries both in a physical sense and in a psychological sense. Therefore, each of them would specialise in what they would do best to ensure that Inuyasha regains his strength at an astounding level instead of having Shippou being the smug dickhole he is when he was pranking Inuyasha by disguising himself as Kagome, Kaede being a totally joyless hag at Inuyasha’s expense, and most of all Miroku making Inuyasha’s injuries far worse than they are by physically hurting him more. No doubt will all eleven Red Power Rangers tell the three arseholes to vamoose and head for the hills before they exterminate them. Once gone, all eleven Red Power Rangers would unleash Inuyasha from the Beads of Subjugation, and he would end up gaining their trust as well as having them trust him back.

Aurico would use his healing powers as a Aquitian to close whatever open wounds Inuyasha has thanks to the special water he has from Aquitar that would do miracles for huge gashes and small scratches combined. Tommy and Jason would provide Inuyasha with the emotional support he needs by attending to him when he needs company as well as allow him to hash out whatever grievances, hopes, joys, and pains he has without either of them judging him, thus having both of them comfort him with a reassuring embrace and words of healing, compassion, understanding, and trust. TJ would prepare Inuyasha’s meals that go beyond the usual ramen noodles, for he would feed him well with steak and eggs, seasonal vegetables, grilled fish, seasonal fruits, and game meat such as deer and boar. Andros would have meditation sessions with Inuyasha to ease his fraught mind and soul as well as make him more focused. Leo would massage Inuyasha to ensure that every painful cramp is disintegrated. Carter would shield Inuyasha from invaders as well as protect the house they are in. Given Eric’s, Alex’s, and Wes’s military training, they would help Inuyasha fend himself off against invading demons with every artillery they have. Cole would use healing herbs and bandages to dress Inuyasha’s wounds as precisely as possible. Everything these heroic Red Power Rangers do for Inuyasha would make him truly grateful that they have remained by his side, never gave up on him, never thought ill of him, and will always show their unconditional brotherly love for this super strong and laudably loyal warrior. Even Inuyasha’s nights would never be filled with terror, as he has eleven strong warriors to be by his side forever.

It says something when eleven valiant Red Power Rangers could make for greater companions, healers, carers, and overall friends for Inuyasha rather than a hypocritical monk, a joyless old shrine maiden living under her late older sister’s shadow, and a miserable excuse of a Kitsune who is completely mouthy and not understanding at all. I can easily imagine Inuyasha forming a much stronger bond with Jason, Aurico, Tommy, TJ, Andros, Leo, Carter, Alex, Wes, Eric, and Cole rather than those three miserable excuses of companions. The less especially said about Kagome the better as well as Sango because they are not as worthy of his time, patience, loyalty, and/or genuineness either. The eleven Red Power Rangers are definitely going to give Inuyasha the warmth and the unconditional brotherly love he needs and would never allow Miroku, Kaede, and Shippou to mess with him any further. At the end of the day, if those three pinheads choose to mess with Inuyasha, they mess with the eleven Red Power Rangers.

I hope you all enjoyed this, and I would love to hear your thoughts on Jason, Aurico, Tommy, TJ, Andros, Leo, Carter, Alex, Wes, Eric, and Cole being much better companions to Inuyasha than those three pathetic pinheads. I will see you in the next submission. Take care, stay safe, and never be a bunch of pinheads like Miroku, Kaede, and Shippou are, everybody.

The Joyless, Inferior, and Miserable Excuse of an Old Hag, The Hypocritical, Deceitful, and Credit-Hogging Shyster, and The Lousy, Badmouthing, and Horrid Jackass from Inuyasha belongs to Rumiko Takahashi and Sunrise. 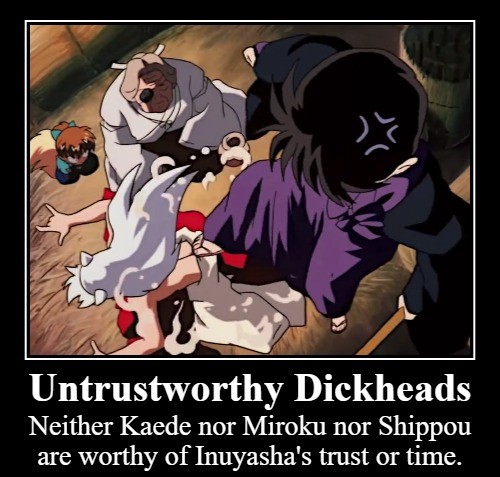