Last year I looked at some Muppet Halloween-related material including an issue of the old Marvel Muppet Babies comic that dealt with a Haunted Nursery. 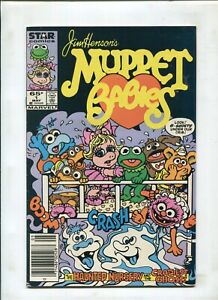 Overall, that was pretty cute and while the Muppet Babies comics from what I’ve heard beyond that one are pretty good, they were not the only comics to feature everyone’s favorite felt stars.  As a comic series simply titled The Muppet Show was launched in 2009. 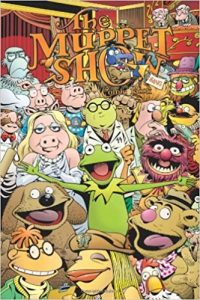 And it just so happens that it had a Halloween arc that included a werewolf story. We are looking at Issue # 10 titled Monster Munch and this arc is titled after a popular song for this time of year. 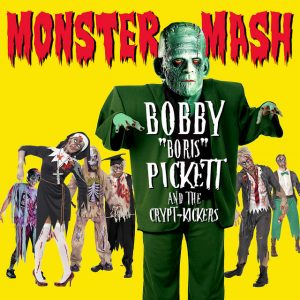 This comic is neat as it is presented like an old TV show episode including sketches and behind-the-scenes hijinks.  The big focus though is on The Electric Mayhem as they are excited to perform with one of their favorite musicians, Howlin’ Jack Talbot. 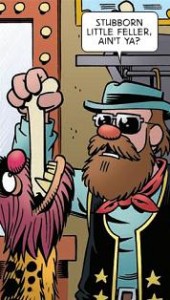 Oh, and I decided to do some research as I thought that name sounded familiar and it turns out I was right as Talbot is a reference to Larry Talbot aka The Wolf Man. That’s something of a giveaway that he could be a werewolf.  But what leads the band to think that Howlin’ Jack might be a werewolf, during each of his musical performances, Howlin’ Jack runs offstage, and in his place comes a dog, even though The Electric Mayhem believes it to be a wolf. 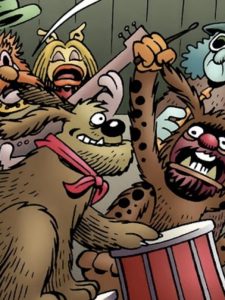 This seems a bit suspicious to The Muppets and they are wondering why Howlin’ Jack is hiding something like this from them and they decide to confront Howlin’ Jack at the end about why he kept running offstage midsong. He admits that he kept running away because he couldn’t remember the lyrics to his old songs and felt embarrassed and the dog that kept appearing onstage is his dog, Wuffles.   He laughs at the accusation against him being a wolf and the comic has all The Muppets singing his song, Monster Munch as he still knows the lyrics to that one but as the comic ends, we learn that indeed Howlin’ Jack is a wolf.

As they run off in the moonlight together.

Overall, his is a pretty cute comic that does a good job of capturing the Muppets spirit quite well while also being a fun story for the spoopy season.