This is something that this episode of Back To The Future: The Animated Series seems to deal with as Marty travels back in time to 1692 to help the Browns and he is eventually accused of being a witch by the daughter of a Tannen. Besides being the daughter of a Tannen,  this character seems to have been inspired by Abigail Williams,  you should be familiar with this person if you ever read The Crucible. Though she was aged up from a 12-year-old in real life to 16 in the Arthur Miller play. Abigail Williams was one of the first people to accuse her neighbors of being a witch, though the episode seems to pull more from the play as Mercy Tannen accused Marty of being a witch after he rejected her advances after learning that her father was a Tannen.

And this is in line with Abigail Williams in the play wanting to be with John Proctor.   And once she couldn’t have what she wanted, that is when she started the rumors and that is similar to what Mercy did. 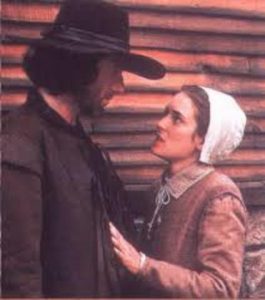 This brings up something in this Animated Series that bugs me as for some reason,  the cartoon decided to make Marty girl crazy and we see this with his reaction to Mercy as he turns into the Wolf from Red Hot Riding Hood.  I get that Marty is a young guy and not the smartest but Jennifer is or at least should be his first love.  This is what sets up the plot as Marty sees Jennifer with a jock and doesn’t get the full story and thinks Jennifer is cheating on her when it’s just about tutoring a jock.

I get this is set up for Marty to learn a lesson of not blaming someone without knowing all the facts but this doesn’t feel like Marty.  Bob Gale has gone on record saying both the Animated Series and the IDW comics are best looked at as What Ifs aka two separate branches of what could have happened after the trilogy.

I will say this though, I do think this episode does a mostly good job at depicting the trials from holding a trial and not giving Marty a fair shake and people believing he was a witch because of him talking to Einstein and playing a harmonica, which they all but thought was the devil’s music.

There are a couple of inaccuracies with how the witch trials are depicted in this episode as much as I may have enjoyed it.  While the timeline is pretty accurate as it takes place in September of 1692, I do appreciate that there is a big fallacy in this episode as they claim that Marty will be burned at the stake if he doesn’t pass the water test.

Twenty people were eventually executed as witches, but contrary to popular belief, none of the condemned was burned at the stake. In accordance with English law, 19 of the victims of the Salem Witch Trials were instead taken to the infamous Gallows Hill to die by hanging.

Though I am glad the show decided to forego depicting hanging as the franchise doesn’t have a good history with hanging scenes considering what happened to Michael J. Fox  on the set of Pt. III 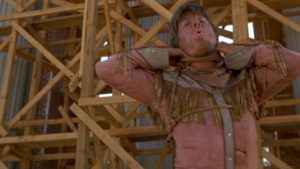 Fox recounted his near-death experience on the set of Back to the Future Part III, writing: “I swung unconscious at the end of the rope for several seconds before Bob Zemeckis, fan of me though he was, realized even I wasn’t that good of an actor.” While the rehearsals had gone well – in practice, the rope became too tight, cutting off Fox’s airways.

This is something that ultimately doesn’t have much to do with the history of witches in Salem during this time but as a BTTF fan, it’s not hard to think of this scene and how it almost took my favorite actor’s life.

Returning to the Salem Witch aspect, I find it odd that the episode combined something people mistake as happening with something that was used because the water test was a real thing, unlike the belief that people were burned at the stake.

As part of the infamous “swimming test,” accused witches were dragged to the nearest body of water, stripped to their undergarments, bound and then tossed in to to see if they would sink or float. Since witches were believed to have spurned the sacrament of baptism, it was thought that the water would reject their body and prevent them from submerging. According to this logic, an innocent person would sink like a stone, but a witch would simply bob on the surface.

So for clarification’s sake, the burning wasn’t a real thing but the water/swimming test was and for obvious reasons with this being a kid’s animated series, the episode had to tone down some elements such as Marty was not stripped down to his undergarments.  Still, it’s insane that this is something that happened. 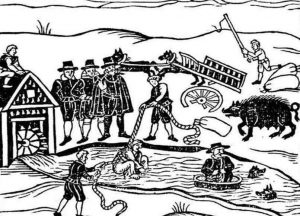 Though of course, Marty makes it out safe as the DeLorean can apparently go underwater as a floatation device was added to it and after using an oxygen tank that was hooked up to the time machine, Marty gets in and the Browns and Marty end up heading back to Hill Valley.

This episode was pretty fun plus I just love geeking out about two things, I love Back To The Future and the history of witches.  These are two interests of mine I never thought would overlap but finding out that the Animated Series did an episode based on a part of history I’m truly fascinated by felt like something I couldn’t pass up looking at.

Tags: Abigail Williams Back In Time back to the future Salem Witch Trials The Crucible witches

6 thoughts on “Back In Time: Witchcraft (Back To The Future: The Animated Series Episode Review)”