This screenshot demotivational poster is highly, utterly, indubitably, and absolutely Anti-Miroku. Sit back, relax, and open your minds to understand where I am coming from with my claim of Miroku being a terrible male companion to Inuyasha and the alternatives I have in store instead of this pathetic excuse of a monk.

From the first time I watched Inuyasha as an 11-year-old boy to watching it in earnest during my middle school years as a 13 to 14-year-old boy to my high school years ranging from 15 to 18 years old, I tried everything I could to find something salvageable about Miroku let alone his “brotherhood/friendship” with Inuyasha. However, every time I tried over and over again, I kept failing to find something redeemable about this pathetic excuse of a brotherhood between Inuyasha the totally awesome super strong dog Hanyo warrior king, dog Yokai king in my AU headcanon, who I will always adore and Miroku the absolute lame-o hypocrite who gets on my nerves with his lies and deceitful ways towards women. Watching Inuyasha in his perspective, I can totally understand why he is so irritated with Miroku. The way Miroku treats Inuyasha like a second to third-class citizen because of how much stronger he is compared to him, despite the many occasions Inuyasha had to save Miroku’s loser behind, his tendency to have a go at attacking Inuyasha when Miroku himself is not really that strong, his flippant favouritism of Kagome, thus making him, Sango, and Shippou her humanoid androids without a brain, and all of the lies, manipulation, deceit, and disingenuousness this horrible excuse of a Buddhist monk have are all attributes of why I believe Miroku was completely atrocious for Inuyasha as a friend let alone as a surrogate brother.

It was clear from the beginning that Miroku never cared when Inuyasha was hurt by Kagome’s sit commands and believed that he deserved it for being rambunctious and rowdy. This hypocrite is no saint either with his womanising ways, tremendous tendency to be no-good cheat, and being full of fibs and lies that I am surprised that they did not manifest themselves into a more frightening monster. Even when that little lie grows into something bigger and stronger than Miroku is, it is not likely that his Wind Tunnel will solve the problem for him. In fact, it will make his problems even bigger. This is especially true with how he treated Inuyasha. After all the times Inuyasha has saved Miroku’s sorry ass from peril, after risking his life to save his male companion, and after everything he put himself through to ensure his safety, Miroku still treated him in an inferior and condescending manner. There was zero brotherly love, and there was only cold-blooded manipulation on Miroku’s part just because he as well as his fellow skanks Sango, Kagome, and Shippou could wheedle him and take full of advantage of Inuyasha’s undying loyalty to suit their selfish needs. He even says he cares for Inuyasha’s safety, but he injures him far more whether it is stomping on him or hitting him on the head with objects or his staff, thus making him even more of a bully than Kagome is. However, Kagome is still the worst bully ever. Miroku is just one of her pathetic little minions doing her dirty work.

With Miroku’s lies, deceit, manipulation, and scumbag nature coming to light, who would be better male companions to Inuyasha? Sesshoumaru would be more reflective of his actions and words, thus making him reconnect with Inuyasha as his brother, and would cast away his haughtiness like the true noble he ought to be in order to build bridges with Inuyasha. Shuran would be the big, lovable, gentle giant who would have both a loving brotherhood towards him as well as a competitive one, thus seeing each other grow stronger both mentally and physically. Hakkaku and Ginta have always seen Inuyasha as a truly strong warrior and one who has always been a lot stronger than Kouga ever was, thus making them ditch Kouga and swear brotherhood and allegiance to Inuyasha. There is no doubt that Shuran, Hakkaku, Ginta, and most especially Sesshoumaru would be the better and bigger men to provide Inuyasha the genuine brotherhood he needs, but there are eleven red-clad warriors, soldiers, combatants, and martial artists who would indubitably stand by Inuyasha’s side and would never be a bunch of phony manipulators.

Once you hear the roll calls it’s morphin’ time, shift into turbo, let’s rocket, go galactic, Lightspeed Rescue, time for Time Force, Quantum Power, and wild access, viewers and readers know fully well of Power Rangers Wild Force’s glorious tenth anniversary episode “Forever Red”. Jason Lee Scott from Mighty Morphin Power Rangers, Aurico from Mighty Morphin Alien Rangers, Tommy Oliver from Power Rangers Zeo, Theodore Jay “TJ” Jarvis Johnson from Power Rangers Turbo, Andros from Power Rangers in Space, Leo Corbett from Power Rangers Lost Galaxy, Carter Grayson from Power Rangers Lightspeed Rescue, Wes Collins from Power Rangers Time Force, Eric Myers also from Power Rangers Time Force, Cole Evans from Power Rangers Wild Force, and even Alex Drake the original Time Force Red Power Ranger would come to Inuyasha’s aid and protection to be the staunch, unconditionally loving, genuine, and nurturing brothers they are. Jason, Aurico, Tommy, TJ, Andros, Leo, Carter, Wes, Alex, Eric, and Cole would even confront Miroku and address how much his lies, manipulation, cowardice, and hypocrisy sicken them to no end. Aurico would address that Miroku has done more harm than good to Inuyasha. TJ would call out Miroku on not being an honourable warrior let alone a genuine friend to Inuyasha. Andros and Leo would call Miroku a pathetic opportunist who gets away with his lies. Carter would give Miroku a firm dressing down on the many occasions he has hurt Inuyasha both physically and mentally and would rather see him in chains and in a jail cell for all his crimes. Wes and Cole would even state that Miroku has no guts, no glory, and no charm whatsoever. Even more cutting is when Tommy, Jason, Eric, and Alex tell Miroku that he is a pathetic excuse of a Buddhist monk who has nothing that Inuyasha wants and should just go flog himself in his lonely monastery to rid himself of his identity of being a hypocrite and a liar. All of what Miroku is confronted with by the Red Power Rangers would make him leave indignantly like the little loser bitch that he is.

Brotherhood and friendship with the eleven Red Power Rangers and eleven powerful martial arts masters aside, they would even encourage Inuyasha to be with a life partner more suitable to him, thus making him choose Ayame the Northern Yoro Warrior Princess for her strength, independence, beauty, and courage. Tommy and Jason would applaud Inuyasha for his excellent choice and would encourage Inuyasha and Ayame to consummate their feelings for each other. This would lead to the eleven Red Power Rangers and eleven martial arts masters to bless Inuyasha’s and Ayame’s beautiful unity which the couple would passionately kiss and make steamy love to each other much to their delight as well as the delight of Hakkaku and Ginta who are also in a beautiful relationship with Shunran much to Shuran’s joy. Sesshoumaru, feeling especially jealous of Aurico, Tommy, Jason, TJ, Andros, Leo, Carter, Eric, Alex, Wes, and Cole, would at first hesitate to join in the warmth and joy. However, after seeing how truly happy Inuyasha and Ayame are together, he would take the first steps forward and request for him and Inuyasha to start afresh as brothers. Kazuya, Paul, Ryu, Ken, Tommy, Jason, and Eric would play around with Sesshoumaru saying that he should speak louder with Inuyasha participating in the game with a delightful smirk on his face. Finally, Sesshoumaru loudly and proudly says that he wants to reconnect with his brother and love him unconditionally, thus showing humility and grace as well as having both Sesshoumaru and Inuyasha embrace each other as brothers much to the delight of Inuyasha’s wife Ayame and his true friends/brothers from other mothers Tommy, Jason, Aurico, TJ, Andros, Leo, Carter, Wes, Alex, Eric, and Cole. Sesshoumaru and Inuyasha would end up promising each other that they will never fight over petty things and also embrace all Red Power Rangers as well as the eleven martial arts masters. Even Sesshoumaru would be helpful in giving Inuyasha and Ayame the best love life they can ever imagine as well as standing by Tommy’s, Jason’s, Aurico’s, TJ’s, Andros’s, Leo’s, Carter’s, Wes’s, Alex’s, Eric’s, and Cole’s sides as their best friends for life.

It says something when eleven steadfast Red Power Rangers and eleven powerful martial artists could make better and greater friends for Inuyasha than some pathetic loser pervert of a Buddhist monk who is, in truth, a hypocrite, a liar, a cheat, and a thief. It also says something that eleven Red Power Rangers and eleven martial artists can be the catalyst of gluing Sesshoumaru and Inuyasha together as brothers while also being extremely supportive of Inuyasha’s much better love life with Ayame. Therefore, Miroku may as well be permanently demolished and never come back, while Kazuya, Paul, Dudley, Guile, Ryu, Ken, Alex, Feng, Jin, Hwoarang, Steve, Aurico, Tommy, Jason, TJ, Andros, Leo, Carter, Eric, Alex, Wes, and Cole are forever here to stay by Inuyasha’s side as well as Sesshoumaru’s side for a very long time united in brotherhood, unconditional love, genuineness, honesty, respect, allegiance, and solidarity.

I hope you all enjoyed this, and I will see you in the next submission. Take care, stay safe, and never be a phony friend like Miroku the pathetic hypocrite, everybody. 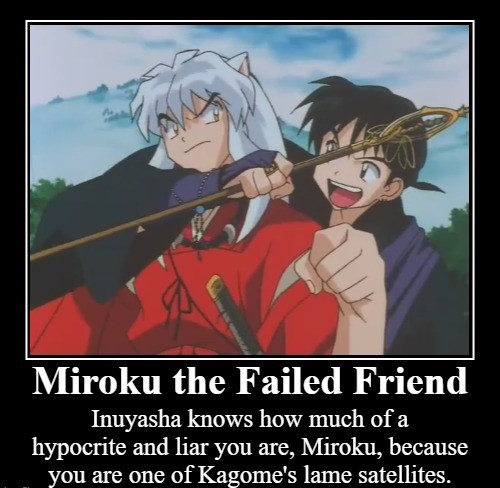