As we leave behind the EQG DTV movies, we hit a milestone movie. Not since the G1 movie had an MLP movie been released in theaters and that happened here with the G4 movie. 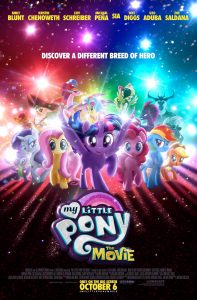 And considering how large the fanbase for FIM was, it does make a bit of sense that a movie tied into Friendship is Magic would see a release in theaters.  I still remember seeing this movie with my friend’s daughter in my Mane Six tee that my big sister gave me and I had as much fun watching her as I did watching the movie.  Oh, and FYI while Tempest does serve under The Storm King, I won’t be covering her here as I have her own Villains Profile entry years ago. It’s funny knowing this actor as Cotton in the first Scream movies and then he shows up as a My Little Pony villain.

This brings me to an issue less with Schreiber and more so the marketing of the movie itself.  Despite this movie being a tie-in to one of my favorite cartoons, the main cast was hidden and their names weren’t on the posters.  I’m sorry but most people aren’t coming to see an MLP movie because Liev Scheiber, Emily Blunt, and Taye Diggs are in it.  They’re seeing it for Twilight Sparkle, Rarity, Pinkie Pie, Fluttershy, Applejack, and Rainbow Dash.  Look, I may have mixed-to-negative feelings about Tara Strong as a person, but Twilight Sparkle was the main character of G4 and her voice actor should have been credited at the very least.

Again, yes FIM had famous voices actors such as Weird Al but this just feels a bit different. 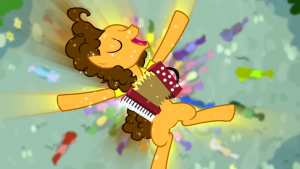 And I know when I covered Tempest Shadow, I didn’t go this in length on Emily Blunt being a celebrity voice but there are a couple of differences, I’ve become more aware of this practice since that time and I think she gave a good performance whereas I’m mixed on Schrieber as The Storm King.  He’s not a bad actor and I get what the movie was going for with his character as it seemed like they wanted him to be a character like Hades from Disney’s Hercules balancing the funny and threatening but it’s never entirely pulled off and I think part of that comes from The Strom King’s lack of screentime.

We first see The Storm King after Tempest Shadow has defeated three of the princesses and left Canterlot in disarray as she calls him up and we get the idea that he has a bit of a jokey side but it just feels off.

Such a big problem with The Storm King is seen at this moment compared to the true standout, Tempest Shadow, he falls flat.  Consider that this movie came late into the show’s run after season seven and by that point, the show had introduced us to so many iconic villains such as Chrylasis and Tierk. Consider how much a threat these villains pose when they first appear and how they can play The Main Characters against each other, Chrissy by pretending to be Cadence and Tierk playing Discord like a cheap fiddle. 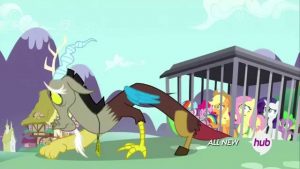 Yes, that latter thing falls more in the Most Evil Deed category (FYI I may cover Tierk next year) but it’s still something that makes him stand out whereas The Storm King feels like the movie needed less a villain and more a final boss after Tempest learned the truth.

Again,  I don’t his personality is that well-defined.  We are told that he’s a tyrant that wants more power but again due to his lack of screen time,  I don’t feel as though the movie gives the audience enough insight into who he is.  Because of this, I decided to read his issue of the My Little Pony Movie Prequel comic and that somewhat gave a better insight. This almost presents him as a contradictory figure showing that he does care for his men but does not consider them friends as he considers friendship a weakness and that no one should be loyal to anyone and that is his downfall as his second-in-command turns on him at the end of the issue.  Again, there are good ideas buried in here but not a lot is truly done with it.

He wants power and that’s pretty much it,  that’s why he has Tempest go after the princesses.  It’s just a bit cliche is all and it’s fine but is just so generic.  Again,   nothing about his desire is all that interesting.

I’m going to go with something a bit more personal here and that has to be when he revealed that he’d been playing Tempest and was never going to fix her broken horn.

This is perhaps the one element that shows how truly evil The Storm King can be as he is willing to play those that work for him for his own benefit.  This shows that there is a spark of a good idea here but not enough is truly done.  You’ll recall how I brought up Tierk betraying Discord and while both of these hold weight,  I can understand how some might feel that holds more weight as we have more investment in Discord whereas we only met The Storm King and Tempest in this movie.

The Storm King’s demise is quite brutal as he’s turned to stone using an orb that was previously used to do similar to Celestia, Luna, and Cadence but he’s on a balcony and well he falls off of it and smashes into little pieces.

His death is probably the best thing about this character as it’s such a dark fate for an MLP villain but may not be unwarranted.

Is The Storm King A Good Villain?

Short answer, no.  Long answer,  he may be the weakest villain from G4 and I know some fans might argue that Sombra and the Pony of Shadows are more worthy of that title and I wouldn’t dispute that they aren’t great or memorable but at least someone like Pony of Shadows serves a thematic purpose and yes you can argue that is Tempest’s role in the movie but even moving beyond that, he never feels like a true threat. And while the IDW prequel comic does give us insight into what he’s like, not much is done with him whereas the comics found a way to elevate Sombra and turn him into a tragic figure. 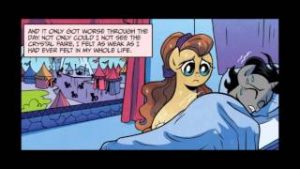 The one thing I’ll give The Storm King is how his presence lingers even after the events of the movie as we see the seaponies are still afraid of him  and is referenced in the EQG special,  Spring Breakdown There though, it’s not so much the character I like but that his presence even after the movie isn’t forgotten.  It’s honestly rather sad that FIM’s big screen outing had one of its weakest villains yet ironically also one of its best. (I mean Tempest there).  Ah well,  when next we meet we leave G4 behind and look at a villain of a New Generation as I look at…