This article was originally going to be up on Halloween but I felt it thematically better coming after yesterday’s entry as this deals with another story of subverting fairy tales.  I am looking at how the film adaption of Into The Woods handled The Wolf.  If you’ll recall years ago,  I looked at this film handled the character of The Witch, and came away saying it wasn’t fair to label her a villain or rather that I had complicated feelings using that label with her.

With The Wolf, I have no problem saying about the character or the actor playing The Wolf.   Yeah, let me get this out of the way right now, I don’t think Johnny Depp is a good person.   Abd that’s about all I’ll say on that front.  You can just Google his name and how he’s mistreated some of his exes to learn why I think this.

This movie made some interesting choices concerning the character of The Wolf, the first being the zoot suit look which was inspired by The Wolf from Tex Avery’s Red Hot Riding Hood. 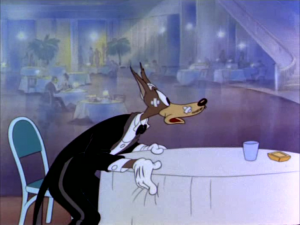 The look of The Wolf’s outfit being based on the Tex Avery Wolf was something Depp himself requested.  Interesting choice and it does make The Wolf stand out more compared to other characters in the musical.  There’s also something else about Depp’s casting as The Wolf that bugs me and that was long before I learned who he truly was.

Depp playing The Wolf for all intents and purposes is stunt casting because, in the stage musical, The Wolf is typically played by the same actor that plays Cinderella’s Prince. 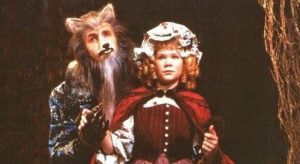 I think removing this double casting loses a bit of commentary that I may be looking too much into but I think having the same actor speaks to the idea of being careful of who you trust.  In Cinderella’s case, the Prince is an idealized version of a man that she only knows in her dreams whereas basic as it may on the surface seem to be about stranger danger as that is what so many believe the original story deals with.  However, if you listen to the song,  it’s about a child predator.   I’ll touch upon this more once I get to that section.

We first see The Wolf when Little Red Riding Hood is walking to her Granny’s house and just how close he gets to the young girl speaks to the type of creep he is. During this whole number, he gets in the girl’s face and invades her personal space showing that he has no care for the boundaries of others because he doesn’t believe in boundaries and thinks it’s okay to invade that space to get what he wants.

He’s a creep and on the surface, the story seems to be about a girl avoiding a wolf but there is so much more going on as The Wolf is a sexual predator and this ties back into many early readings of the story.

Bettelheim and other critics have said that “Little Red Riding Hood” is really about a girl who encounters a potential sexual predator in the form of a male wolf.

As pointed out by many others,  more child-friendly versions of this story have The Wolf wanting to eat what is in Little Red Riding Hood’s basket whereas here, he wants to eat her.  And I think you can put two and two to figure out what that means.

His wanting to eat the little girl can be viewed in many different ways from most assuming it has sexual undertones such as wanting to rape the young girl.  I know that some people were skeeved out by the sexual undertones, but it serves the purpose to teach Little Red Riding Hood a lesson.

Nice is different than good

This speaks back to how he compliments the young girl and attempts to get her attention throughout the song by stopping her at every chance she gets.  There’s a sense that he has done this before to other young girls and he would keep doing this if someone hadn’t stopped him.

I believe in this case, it’d be him eating Little Red Riding Hood’s Granny as it’s another tactic to get close to the young girl to get what he wants. 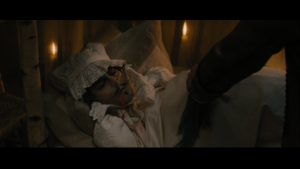 I again could be reading too much into this but him doing this feels like how grown men and women pretend to be someone they aren’t to trick and lure young girls for their misdeeds.  Think of the idea of catfishing, it’s not a one-for-one analogy but it does feel similar enough.

This song is the whole selling point of The Wolf and speaks to how monstrous and dangerous he truly is.  According to Hollywood Reporter,  they decided to tone down some of the sexual aspects of the song.

So we just found our way, not making it too heavy on the pedophilia front.

This makes sense as Lilla Crawford who played Little Red Riding Hood was a kid when this movie was made but I still think the sexual elements persist with certain movements Depp makes during the number and the lyrics still give off those unsettling feelings that are meant to come from this song.  There may be no old penis hanging out in this movie but it still comes across as though The Wolf wants to truly harm Little Red Riding Hood. 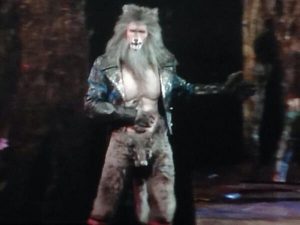 Yes,  that was an actual thing on The Wolf’s costume and makes sense considering the type of character he is and what is trying to be said with this character.

His death is a bit basic,  The Baker saves Little Red Riding Hood and her Granny by killing him, and then he is skinned and his fur is turned into a coat for the young girl to wear.  I think that Little Red Riding Hood wearing a coat made of The Wolf’s fur serves as a reclamation of who she is and that she won’t let monsters like The Wolf hurt her.  This is heard in “I Know Things Now”  which serves as her big lesson after her encounter with The Wolf.

It’s a simple but powerful statement speaking to the young girl waking up and realizing what kind of monster, The Wolf was.

Is The Wolf A Good Villain?

While I may not be a fan of the actor that played The Wolf, I do think The Wolf serves an important purpose in the growth of Little Red Riding Hood in this movie and that does make him important.  In that regard though, I think he’s less a character in of himself and more an obstacle for her to overcome.  And in that regard,  he works rather well.  As stated throughout, he’s nothing more than a dangerous predator and that is what makes him so scary.   He’s meant to make you uncomfortable because people like him truly exist and they are some of the scummiest people on this planet.

Well, this brings a close to look at Disney wolves. However, I still have more blogs coming 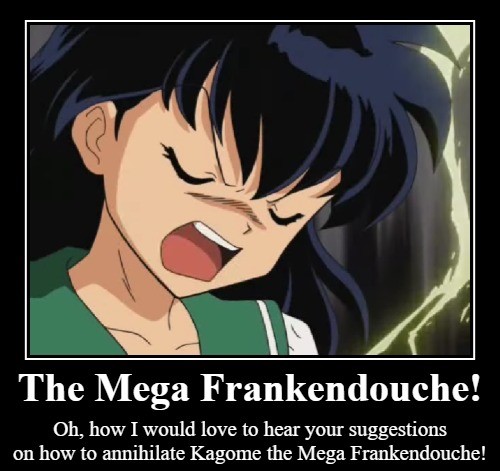 2 thoughts on “A Look at Disney Howls at The Moon: Villains Profile: The Wolf (Into The Woods)”