This Halloween on my main blog, I’ve been taking a look at media starring werewolves from The House of Mouse.  I have plenty of interests where this comes up as well including Scooby-Doo but his werewolf movie has been covered to death on the internet. 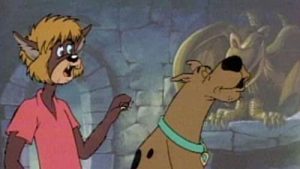 That’s why I’ve decided to head to NYC and see what happens when the Boys in Beige (or rather multicolored jumpsuits in the cartoon) go up against vampires and werewolves.   Yep, the Ghostbusters once faced off against vampires.  It’s a fun but simple episode as the team is tricked to partake in a war between two different groups of vampires and both are quick to pin the blame for taking the town on one another.

A vampire war is a neat idea and I think the episode does a good job of showing neither side is worth rooting for.  Especially when you see how Winston and Ray are trapped in a prison with the original occupants of the town. Oh and this is where the werewolves come in as that’s what the original occupants were and this turns into a werewolf vs. vampire war and it’s pretty exciting to watch if pretty weird as we see the monsters start turning into vampires/werewolf hybrids. I do appreciate once the Ghostbusters realize what’s going on, they nope out of there as this isn’t their fight and trap the town by flooding a damn with their proton packs. While this episode is more vampire focused than werewolf-focused, the werewolves still get their time to shine in the end, and while it’s a bit light on the plot as it’s just a monster war, the team finds themselves in the middle of, its still a fun time.

Oh and I do appreciate how Egon keeps his promise to the main villain’s servant Lyta and promises that they’ll help her escape if she helps the team and the parting shot of the episode is Lyta on the back of the Ecto-1. In all, this is a good episode and one I wouldn’t mind returning to in the future.