Horror and mystery are two genres that mix quite well and quite often.  If you stop and think for a moment, the Scream movies could be classified as whodunits. This is something that is often seen with my favorite teenage sleuths, Nancy Drew and The Hardy Boys.  The very first episode of The Hardy Boys/Nancy Drew Mysteries is titled The Mystery of The Haunted House and not to mention, season two opens with a two-parter where the three detectives team up and “Meet Dracula”. I have looked at these episodes in the past as part of my now long-defunct Hardy Boys TV show retrospective.  I saw this episode pop up on a Halloween Wiki and was mentioned in other reviews as having mild horror themes.  This is rather humorous as The CW Nancy Drew fully embraced the supernatural and ghosts are such a big part of that show. Seriously, that is a great show. It’s easily the best CW show and I may look at its tie-in prequel book next year.  There is another element that ties this episode to the horror genre and that is the location as the house from Alfred Hitchcock’s Psycho is used as a haunted house in this episode.  Now, this is not the first time the famous house appeared in this show as it was also used in The Mystery of The Haunted House. 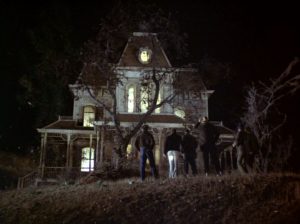 Now in many regards here,  the episode’s mystery seems to take a backseat to the eerieness of the episode as the episode does seem to imply that the house is truly haunted as there are strange happenings as the house seems to have strange happenings going around the place such as a fire burning with no one starting it and the episode does seem to hint that ghosts may indeed haunt this place but Frank, the older of the two attempts to logic his way out of this.  his is rather humorous as years later, there’d be a Hardy Boys book of Ghost Stories. 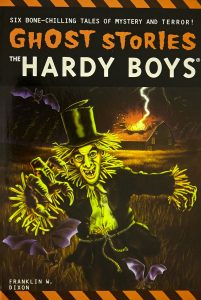 I do find it interesting for a show that seemingly likes to play things straight,  it wasn’t afraid to have the supernatural elements be real and that is also seen with guest star Melanie Griffith who plays a young girl named Stacey that is psychic. 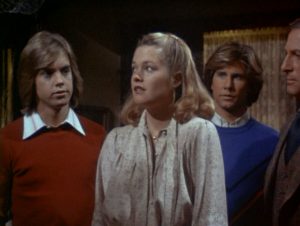 This once again is another element I found interesting as the episode played it straight which means that in the world of this tv, psychics are real things and they treat it as something that should be examined by a doctor.  This also doesn’t make her popular with the people in her town as they accuse her of being a witch. 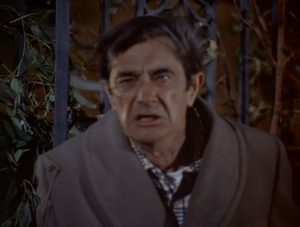 This comes in part from knowing that a man’s young girl was going to die in a car crash.  This is such an interesting element and I like that it’s played straight as it shows how something such as this can fit in The Hardy Boys’ world.  Now as I said, the actual mystery of the episode is about a third-party member of a crime that took place in 1958 coming back to retrieve money that was hidden in the house that the town believes to be haunted is the less important aspect of this episode.

This episode is truly more about the atmosphere that the episode provides.  It is in many ways,  a nice breezy episode for this time of year that makes seeing two of my favorite characters in a setting such as this quite enjoyable.  The only thing I might find a bit questionable is The Hardy Boys hypnotizing Stacey to think she’s four years old as that old she was when she first went to the house and saw the criminals there hiding the money and it traumatized her.  Something about making her relive that event doesn’t sit right with me but that’s my only major gripe with the episode. 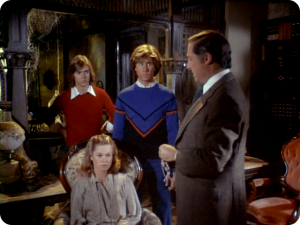 And that in part comes from Frank having a tussle with the criminal of the episode but as I said,  that is perhaps the one thing I don’t like about this episode.   Everything else works rather well as the supernatural elements are there but aren’t overt until the very end when you see the ghost that looks suspiciously like someone Joe and Stacey saw in a painting earlier in the episode and it ties into something read by Stacey as to how this house was cursed. 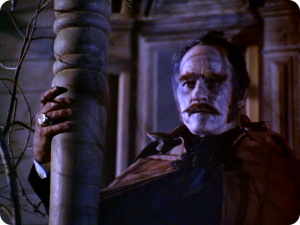 There are plenty of other Hardy Boys and Nancy Drew episodes from this series alone I could ever for this event including a Nancy Drew episode that seems to have been influenced by the original Phantom of the Opera, which sounds fun. I may consider doing a whole Hardy Boys/Nancy Drew Halloween thing next year but as for now, I hope that you enjoyed this dip into this great show.

2 thoughts on “On The Halloween Case: The House On Possessed Hill”