I went back and forth about doing another Loud House Halloween blog this year and I think I found an episode perfect for this time of year. One of the most popular forms of entertainment around the spooky season is haunted houses. Think stuff like Halloween Horror Nights or Knott’s Scary Farm. 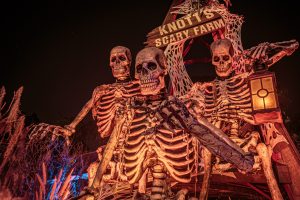 These admittedly aren’t my type of thing but I do get the appeal and that’s what this episode deals with. And this episode does a good job of playing into this as it opens with Lincoln and Clyde hearing about a haunted house from Chandler and to not show that they’re scared, they act as though they can handle it.  Even though the show has established many times that these two are scaredy cats. So, that’s fun and it fits with what we’ve seen before in a way to overcome this, Linc turns to his sisters in ways to help them overcome their fears by using some immersion tactics.  None of this seems to work and rather has the opposite effect. To be completely fair, that is a bit creepy and I can see how that’d scare the boys. There is a cute moment where Bobby of all people after learning everything decides to help Lincoln and Clyde by giving them a tour of the haunted house during the day to show that the stuff isn’t real.  This is such a sweet gesture and speaks to the good nature of Bobby. Having someone like Bobby explain that the things in the haunted house aren’t real and not something to be truly afraid of is something I imagine that a lot of kids would love.  We know that kids love getting scared but it all comes down to how many scares the kids can handle and yeah,  Linc and Clyde may be more sensitive than other kids but that’s okay.  Though the management of the haunted house didn’t seem to like the boys learning the scares weren’t real and fired the original staff to make the haunted house to make it scarier and yeah, that just ends up with the boys running through the haunted house screaming their heads off but they do technically make it all the way through. So, that’s fun and works well for what the episode is going for.

This isn’t one of my favorite Loud House episodes but it is fun to watch around this time of year alongside episodes such as Tricked.   I hope that you enjoyed this as I had a good time looking at this episode.