It has been a long time in the making, as I have been wanting and willing to make this come to full life. After several binging sessions of Mighty Morphin Power Rangers Seasons 1 to 3, especially thanks to my viewing of “I’m Dreaming of a White Ranger”, which I plan to do another YouTube video on for this year’s Red Ribbon Reviews, I finally accomplished what I have been wanting to do with The Splendid Seven consisting of Sesshoumaru, Shuran, Inuyasha, Hakkaku, Ginta, Ayame, and Shunran. I am, of course, referring to turning them into the Mighty Morphin Inurangers, with 17-year-old Ginta as the Blue Triceratops Inuranger, 13-year-old Shunran as the Pink Pterodactyl Inuranger, 18-year-old Inuyasha as the Red Tyrannosaurus Inuranger, 18-year-old Shuran as the Green Dragonzord Inuranger, 19-year-old Sesshoumaru as the White Tigerzord Inuranger, 15-year-old Ayame as the Yellow Sabre-Toothed Tiger Inuranger, and 17-year-old Hakkaku as the Black Mastodon Inuranger. It was absolutely elating and exciting to do this, and I could not be any happier to have accomplished this with all of my heart, mind, and soul. This is also in the spirit of this year’s Power Morphicon, although I was obviously not there in person and that I was a few days late while this happened, as well as Mighty Morphin Power Rangers’ 29th anniversary which happened barely a week ago.

I can tell that there are countless Power Rangers fans about to be in the comments section typing that I got certain ranger costumes “wrong”, specifically where Sesshoumaru’s and Shuran’s suits are concerned as well as the morphers. Furthermore, I could also sense some Power Rangers fans wondering what are the extra details doing with these seven Yokai warriors with attitude. Have no fear because I can explain.

Yes, Mighty Morphin Power Rangers did incorporate Kyoryu Sentai Zyuranger in its first season and Gosei Sentai Dairanger in its second season, hence the different mouth formations for the six original Zyurangers and the only Kibaranger from Dairanger. Yes, the five original Power Rangers, i.e. the Red, Black, Blue, Yellow, and Pink Mighty Morphin Power Rangers, had silver morphers, while the sixth/extra rangers, i.e. the Green and White Mighty Morphin Rangers, have gold morphers. Yes, only the original five members of the Mighty Morphin Power Rangers had Blade Blasters, while the Green Ranger had his Dragon Dagger and the White Ranger had Saba the talking tiger sword. However, I decided to make the move of having all seven Mighty Morphin Inurangers possess silver morphers, Blade Blasters, and the same mouth formation on their helmets as a means to convey that there were already seven Power Coins and Power Morphers in store for these seven teenage Yokai warriors with attitude organised and provided by Zordon and Alpha 5. The only exception was keeping Sesshoumaru’s belt gold just like the original White Tigerzord Ranger because it did not clash with the suit colour.

Another notable feature is how I preserved each of their individual attire and physical attributes from the Inuyasha anime and manga, i.e. Ginta’s vest, Shunran’s ribbon, Inuyasha’s ears and purple stripes on his cheeks, Shuran’s golden diadem, Sesshoumaru’s facial markings, Mokomoko fur on his shoulder plates, and spiked pauldron; Ayame’s iris and necklace, and Hakkaku’s armour and chain, as a means to make them distinguishable from their real-life Mighty Morphin Power Ranger, Zyuranger, and Dairanger counterparts. I would also like to give credit to SamaraAdele14 for the ideas she came up with when I requested Sesshoumaru, Shuran, Inuyasha, Hakkaku, Ginta, Ayame, and Shunran as the Mighty Morphin Inurangers. They have definitely inspired me to give my own spin on this. Furthermore, I decided to give Ayame a skirt just as my way of saying that Trini Kwan and Aisha Campbell are totally vindicated in the sense that at least Mighty Morphin Inurangers would not have to rely on either footage of Boi’s morphed form from Zyuranger or not letting the Yellow Mighty Morphin Power Ranger have a skirt akin to her Pink Ranger comrade/sister/best friend for life. Therefore, through Ayame, I feel like I have given Trini and Aisha justice in doing this particular action.

Where individual weapons are concerned as well as the Power Blaster and the Zords, I will get to them individually and/or as a group. Minor spoilers, though. Inuyasha’s version of the Power Sword is going to be akin to his Tessaiga except beefier. Shuran’s version of the Dragon Dagger is going to have additional lightning powers. Sesshoumaru’s version of Saba is essentially Saba on steroids in terms of Tenseiga, Tokijin, and Bakusaiga merged into one sentient sword with a bit of Saya added there for good measure. Hakkaku’s Power Axe would be a bit cruder in design. Ginta’s Power Lance would be akin to the spears used in the Wolf Yokai warrior tribes. Ayame’s Power Daggers would have a leaf-life design to them to hearken to the occasions where she used her leaves as shuriken. Shunran’s Power Bow would have a cherry blossom aura added on for good measure. The original Mighty Morphin Power Rangers had the Power Blaster formed from the Power Sword, Power Axe, Power Lance, Power Daggers, and Power Bow, but I am willing to switch it up for my Mighty Morphin Inurangers headcanon. Not only are those five aforementioned weapons going to be added but also the Dragon Dagger and Saba on Steroids to make for a complete Power Blaster. Furthermore, all seven Zords, i.e. Tyrannosaurus, Dragonzord, Tigerzord, Mastodon, Triceratops, Sabre-Toothed Tiger, and Pterodactyl, are going to be combined to form a stronger, more formidable, and more imposing version of the Megazord. Essentially, what the Mighty Morphin Inurangers have is the Megazord on steroids. 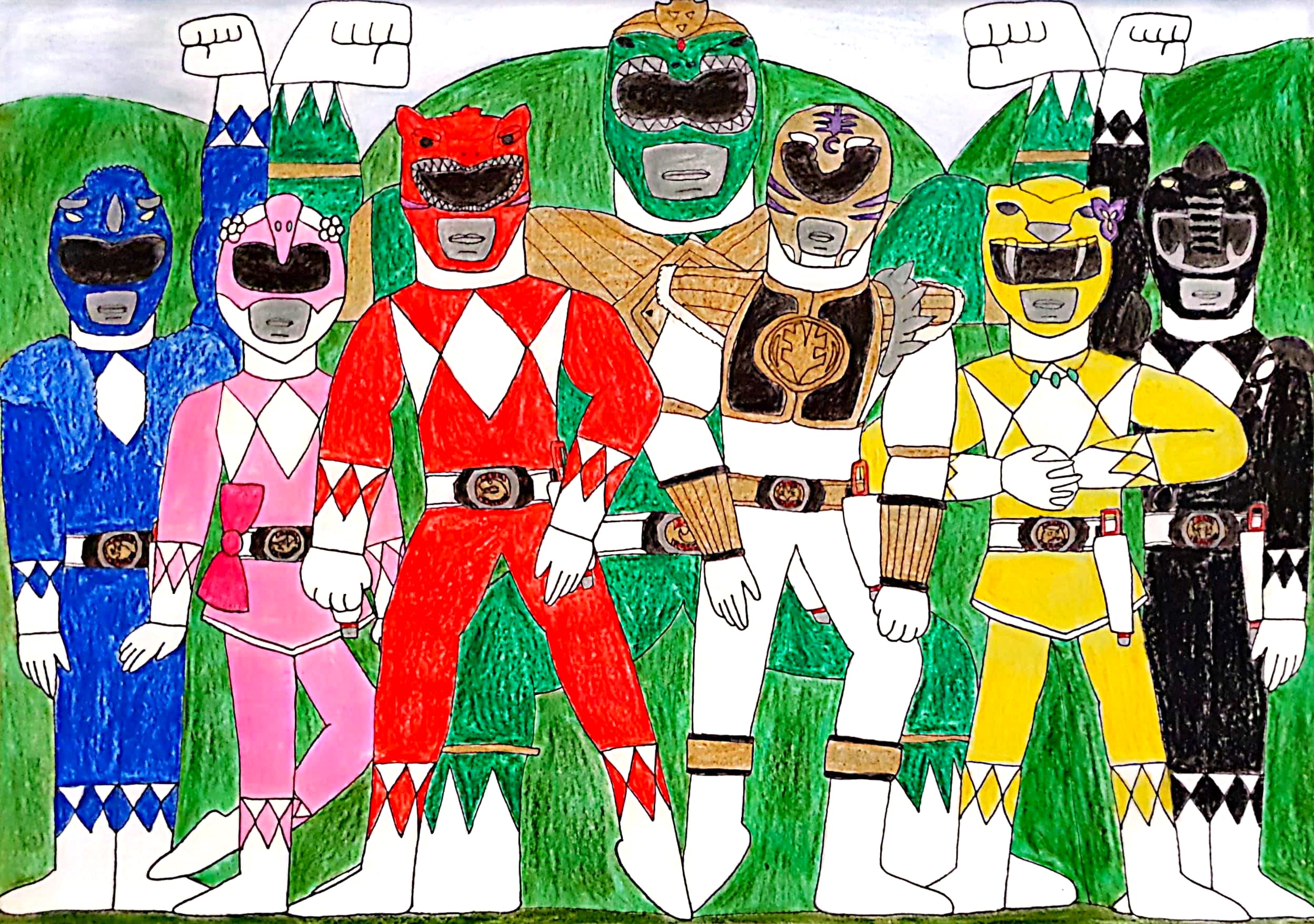