Massive Thanks to My 700 DeviantArt Watchers

Hey, everybody. Antoni here. I have just hit a new DeviantArt milestone, as I have reached exactly 700 watchers. Since I hit this number of watchers, I thought I would increase the number of favourite pieces of fan art to thirty-five, as 700 is also divisible by that number, and I love to go slightly further than the norm.

Words cannot begin to describe how blessed, grateful, and elated I am to have reached a new DeviantArt milestone, reaching 700 DeviantArt watchers. For that, I am using this opportunity to share with you my collage of thirty-five of my most favourite drawings I have done thus far, which represents the gist of what I specialise in. Whether I produce content relating to The Splendid Seven, The Animated Jungle Brothers, The Comic Jungle Brothers or RobRae’s and Zutara’s Double Dates among others, I have always been ready to pump out content for all of you wonderful people.

The Splendid Seven started out with my immense love for Inuyasha’s and Ayame’s passionate, intimate, sexy, and gorgeous love as a mighty power couple and for Ginta’s and Shunran’s lovable, adorable, beautiful, and calming romance as a lovely power couple and flourished into my fascination with Sesshoumaru, Shuran, Inuyasha, Hakkaku, Ginta, Ayame, and Shunran as a close-knit, united, and strong family of Yokai warriors. I always perceived them as a well-balanced group combining Sesshoumaru’s stern warrior mindset and lethal combat prowess, Shuran’s brute strength and potent determination, Inuyasha’s fierce courage and muscular formidability, Hakkaku’s relentless speed and quick reflexes, Ginta’s accurate timing and sheer willpower, Ayame’s fearless determination and staunch valour, and Shunran’s hearty warmth and shining genuineness, considering all of these traits constitute the hallmark of their great awesomeness as a family. The possibilities I have for these seven Yokai warriors are indubitably endless and rich whether I have them as rambunctious young children, slightly older children being in a 90s setting with Roc Emerson as their teacher, older children furthering their training in the martial arts with a Jason David Frank expy in Sensei Jason, the Mighty Morphin Inurangers which is The Splendid Seven version of the Mighty Morphin Power Rangers, the Jungle Warlords or involved in various martial arts tournaments, which the latter is starting to become my most favourite idea for them. With the idea of Sesshoumaru, Shuran, Inuyasha, Hakkaku, Ginta, Ayame, and Shunran involved in martial arts tournaments as a powerful team of Yokai martial artists, I could configure the fighting styles I have for them, with Sesshoumaru being a Shotokan Karateka who incorporates Jujitsu and Hapkido, Shuran being a Sambo and Vale Tudo practitioner/Sumo wrestler, Inuyasha being a Kyokushin Karateka who incorporates Judo and Taekwondo, Hakkaku being a Muay Thai/Pradal Serey practitioner, Ginta being a Lethwei/Sanda practitioner, Ayame being a Kickboxer and Koppojutsu practitioner, and Shunran being a Capoeira and Shaolin Kung Fu practitioner. This is especially considering that I have been a huge player of Tekken, King of Fighter, and Street Fighter as a child, and I thought it would be a great pleasure to incorporate specific characters from these games to be their mentors. Moreover, it would be a pleasure to have their progeny just as involved in the martial arts as they are. I would even be so happy to have The Splendid Seven have crossover friendships with Jin Kazama, Hwoarang, Steve Fox, Baki Hanma, Ryoma Sakamoto, Takeshi Sendo, Kiichi “Kiibo” Miyazawa, Ichise, Ippo Makunouchi, Kiba, Megumi Minami, Ran, Kaoru Ichinose, and Cheza among others, and I would be totally ecstatic to have them together. The love I have for this group of seven Yokai warriors with attitude, guts, and stamina knows no bounds, and I am really happy to make them the cornerstone of my content.

What happens when you combine George of the Jungle, Basuli, Tarzan, and Maugli? You have the strongest quartet of handsome jungle brothers in not only all of Africa but also the entire world. Having a strong father like Chief Keewazi to make them grow into the powerful warriors that they are is also great, plus having a leopardman brother such as Kaj, a lion brother such as Simba, a lion father such as Mufasa, and a caveman training buddy in Grunch would make their growth as warriors fully realised, considering how they can use their magnificent muscles, iron claws, and steel fangs to defeat their enemies in feral glory. Even better is when Basuli and Tarzan are happily married to their favourite Greek demigod of all time Hercules as well as having Namontack and Kocoum also as their husbands, while George and Maugli are respectively married to Namontack and Kocoum as well as having Hercules be their loving husband too. It is not just bulging muscles, sharp fangs, iron claws, radical wrestling moves, and furious fists that define George, Basuli, Tarzan, and Maugli as brothers but also the filial love they have for their father Chief Keewazi and, most of all, the romantically intimate love they have for Hercules, Namontack, and Kocoum. In fact, I would even love to George, Basuli, Tarzan, and Maugli in jungle mixed martial arts attire, especially considering that their fighting styles are a combination of Pankration, wrestling, boxing, Muay Thai, Kapu Kuialua, Pehlwani, and Malla-yudda, and having their husbands Hercules, Namontack, and Kocoum involved would be just as phenomenal to the point where their fights against stronger opponents would take place in Opar. After every battle, it would be a whole lot of love-making for the four jungle brothers with their three warrior husbands. Life could not get any better for them, and I would love to keep on drawing more fan art of George, Basuli, Tarzan, and Maugli being a powerful quartet of jungle muscle brothers as well as their intimately romantic life with Hercules, Namontack, and Kocoum.

While I have not drawn them as much as I should, I will still cherish my precious Dell comic jungle brothers consisting of Kavandavanda, Tarzan, Malb’yat, and Arok even to the point where I think adding in Bundroc would be just as amusingly enjoyable. Therefore, having Kavandavanda, Bundroc, Tarzan, Malb’yat, and Arok as the handsome, super strong, super powerful, and super fierce jungle brothers that they are is akin to riding a thrillingly fun roller coaster. Adding in the jungle queens Sheena and Jana with the five jungle kings would make this a mighty and proud family that will last for all eternity. Moreover, Conan of Cimmeria, Ka-Zar of the Savage Lands, and Zula of the Wasai Tribe would be their best friends for life. It also helps when five strapping jungle kings such as Kavandavanda, Bundroc, Tarzan, Malb’yat, and Arok and two sexy jungle queens such as Sheena and Jana are also Africa’s most powerful combatants with mixed martial arts combining the styles of Pankration, kickboxing, boxing, wrestling, Muay Thai, Lethwei, and Brazilian Jujitsu, especially with the five jungle kings’ bulging muscles and the two jungle queens’ radical moves. In fact, one dream jungle combat full of carnage, ferocity, and terror I would love to formulate for my Splendid Seven jungle warlord AU is Kavandavanda, Bundroc, Tarzan, Malb’yat, Arok, Sheena, and Jana versus Sesshoumaru, Shuran, Inuyasha, Hakkaku, Ginta, Ayame, and Shunran complete with roaring, muscular strength, and seeing two groups of jungle warrior sovereigns rip each other to shreds with their bare hands before recognising each others’ strengths and scents and being overjoyed to see each other after being in separate sides of the jungle for many years. Overlooking the fierceness Kavandavanda, Bundroc, Tarzan, Malb’yat, Arok, Sheena, and Jana emit as fiercely formidable jungle sovereigns, they would also be very tender towards each other, especially with the five jungle kings giving romantically intimate massages, kisses, and hugs to their two favourite jungle queens. I speak for myself when I say that I would love to keep the ideas brimming and flying because they bring me much joy regarding these mighty jungle sovereigns.

This would not be complete with mentioning Ichise x Ran from Texhnolyze, Kiba x Cheza from Wolf’s Rain, Robin x Raven from Teen Titans, Zuko x Katara from Avatar: The Last Airbender, Kohaku x Rin from Inuyasha, and Souta x Kanna also from Inuyasha because I have also been a proud partisan of these wonderful couples ever since I was between 12 to 14 years old. I would love to continue to give these couples more love in my DeviantArt gallery because there is so much good to be found in each of these precious couples. Whether it is IchiRan’s genuineness, Kiza’s nobility, RobRae’s intimacy, Zutara’s splendour, KohaRin’s lovability, and SouKan’s loveliness, I decree that I can never ever get enough of these couples. Therefore, the possibility of drawing these couples more often is quite high, and I would enjoy it a whole lot.

I hope you all enjoyed this, and I will see you in the next submission. Take care, stay safe, and thank you so much for your support, your encouragement, and your absolutely awesomeness, everybody. 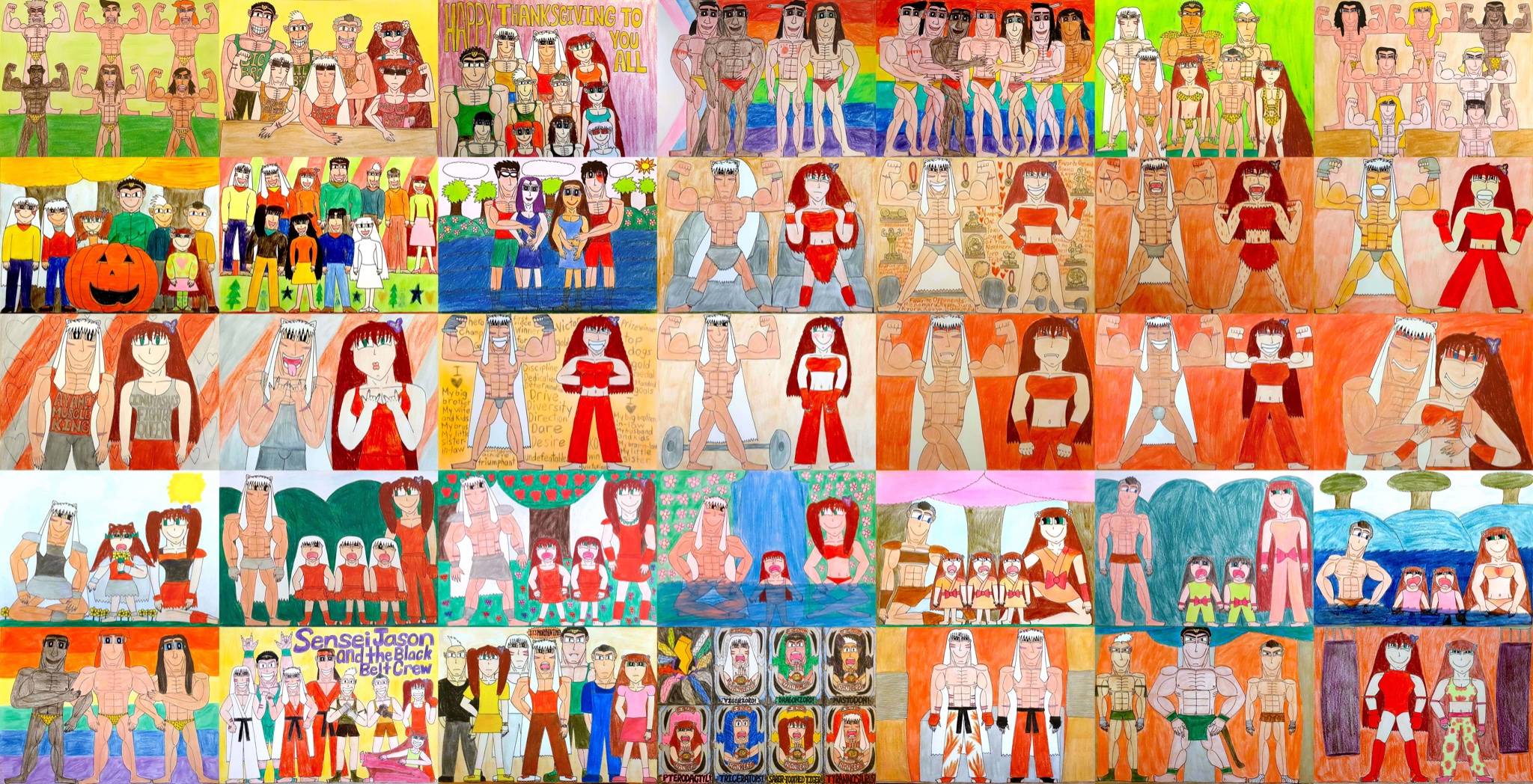