Hello and welcome to Fanfic Subgenres, where I discuss common subgenres of fan fiction, and then see where they apply in professionally-produced works.

Today I’ll take a look at a subgenre of a subgenre, namely the High School Alternate Universe. The Alternate Universe fic subgenre has many sub-subgenres (for lack of a better phrase) and the High School AU is one of them. (Of course technically all fan fiction is set in an alternate universe seeing as it’s not canon, but that’s something I’ll discuss in more detail some other time). 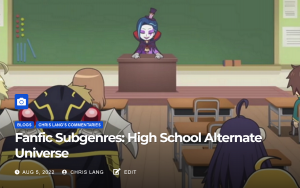 The High School Alternate Universe is pretty much what you’d expect. It’s an alternate universe where the main characters of a series are in high school. In fan fiction, it’s been done with almost every franchise. Lord of the Rings, Legend of Zelda, Star Wars … just about any series you can name.

So, why do these high school fics exist? Aren’t the characters compelling enough in their normal settings? Well, I think a lot of these fics exist because the writers are either still in high school or are nostalgic for their high school days, so for some reason they decide to transplant their favorite characters into a high school setting. Others probably do it for the same ‘What If’ reasons that spawned the other Alternate Universe fic subgenres. They just want to see what the characters are like when placed in a different setting.

Of course, to me the best of these fics are when the characters are still recognizeable as the characters even in the different setting. Even though I’m not a big fan of this subgenre, I feel that to do a High School AU fic right, you have to make sure the characters retain most of their personalities, quirks, and so on to be recognizable as high school counterparts of the characters we are familiar with. Otherwise, what’s the point?

Now, do High School AU fics exist in professionally produced works? Of course they do, and there’s more out there than there were when I wrote the original version of this article. First off, I’ll note two that didn’t quite make it out of the planning stages.

A High School AU animated series based on Batman was planned some years back, but Gotham High never actually went beyond the concept images. It makes me wonder just how they would have justified it, as it is hard for me to imagine Bruce Wayne, his friends, and his enemies in high school in some alternate universe.

Another professionally-done High School AU that never materialized was Muppet High, a series featuring Kermit, Miss Piggy, Fozzie, and the rest in a 50’s style high school. Though merchandise for it appeared, the actual show never aired. This I can more easily imagine, seeing as how the Muppets DID have the first of many ‘baby’ spinoff shows, Muppet Babies. (But that’s a subject for another day). So of course it kind of makes sense for them to do another ‘What If’ series based on the premise of the characters being in high school.

However, there have been a few professionally-produced High School AUs that have actually been completed and released. Many people on this site are familiar with Equestria Girls, the feature-length special of My Little Pony: Friendship is Magic, where one of the series’ main characters Twilight Sparkle pursues the villain Sunset Shimmer into … well, an alternate universe where the counterparts of nearly everyone Twilight knows are in high school as either students or faculty. 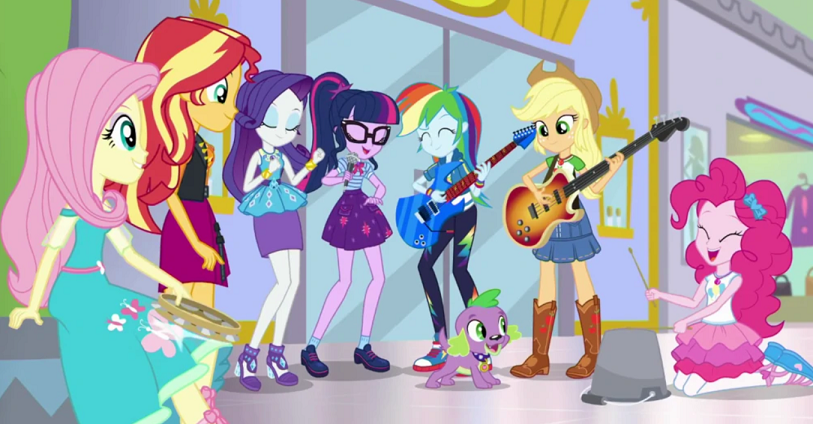 Oh, and everyone’s human in this world instead of being ponies. This goes for Twilight and Sunset Shimmer, who assume human form upon arrival in that world. Twilight only returns to her normal form after returning to her own world at the end of the film.

On the face of it, it sounds like a pretty bad idea pushed on the show’s creators by execs who’d be writing High School AU fanfics if they weren’t too busy being execs. At best, on paper it sounds like ‘My Little Pony: Friendship is Magic‘ minus the ponies and plus high school. One hearing only the basic description might conclude that it’s the worst idea in a Hasbro related franchise since Transformers Action Masters (a line featuring re-issues of classic Transformers characters, only they’re now non-transforming action figures with sidekicks and equipment that does transform).

Some might even think the idea of a high school setting is redundant, given that there already IS a school setting in the regular MLP:FIM series. Many of the episodes featuring the Cutie Mark Crusaders (the younger sisters or fans of the Mane Six characters) are set at a school. Their school comes complete with the pony equivalent of the usual high school stock character of the stuck-up rich Mean Girl, Diamond Tiara. (Ironically enough, while Diamond Tiara does have a counterpart in the Equestria Girls world, she only appears as a cameo without any dialogue in the film). So some would wonder what the point of this possible spin-off pilot is.

However, the show’s creators manage to make it work, keeping many of the show’s themes about friendship and integrity intact even in this different setting. Like in all the best High School AU fics, the counterparts of Twilight’s friends that she meets here are pretty much the same in personality and quirks. The main difference there is that they’re high school girls instead of ponies. And of course the ending climax with Sunset Shimmer is done particularly well, with a nice little message that the magic of friendship can be found anywhere, and not just in Equestria (of course, most of us knew that already, but it’s nice just the same).

So all in all, it worked pretty good. It worked out good enough to spawn a few sequels, which turned out to be better than I expected them to be (though Rainbow Rocks is probably my favorite). I did, however, have my doubts about them going in.

The reason (or at least one of the reasons) My Little Pony: Friendship is Magic is so successful is because it combines a fantastic setting (a world ruled by talking ponies where magic and weather control are parts of everyday life) with characters we can relate to. Even if winter on our world doesn’t need help to be wrapped up, we can still relate to Twilight’s wanting to help with the Winter Wrap Up events even if she finds it hard to find something she can do. We can easily relate to Fluttershy’s wanting to be more assertive, or Pinkie Pie’s worrying that the new party pony in town might make people forget about her, or Rainbow Dash’s wanting her competitors to play fair, and so on, because many of us have had similar experiences in our own lives.

(Hey, the episode ‘Lesson Zero’ made me feel less bad about not posting a blog entry every month even though I try to post at least one blog entry a month. I could easily relate to Twilight’s agonizing over feeling pressured to write to Celestia every week, and the ending, where Celestia says Twilight shouldn’t feel too pressured, was a welcome message).

I had my doubts about further installments of Equestria Girls because I felt that an ongoing Equestria Girls series would have less of this combination of the fantastic with the normal, since it’d be set in a mundane human world with only a few magical elements. While yes, the characters would still have problems that we could relate to, the combination that makes MLP:FIM such an interesting series for viewers both young and old (in addition to the clever writing) wouldn’t be there. However, despite my doubts, the two immediate sequels Rainbow Rocks and Equestria Games (where we finally get to meet that universe’s Twilight, who’d only been teased in a brief mention in the first film, and a brief cameo at the end of Rainbow Rocks) turned out to be fun and entertaining films, and the shorts released along with them (where we meet more of that universe’s versions of other recurring MLP: FIM characters such as the Apple family and the Flim Flam Brothers) were also a lot of fun. We also had a pretty good redemption arc for Sunset Shimmer.

The fourth film, Legend of Everfree, was all right, though aside from Sunset Shimmer (who stayed in the EQ Girls world as part of her redemption arc), no one from the regular MLP:FIM universe appeared in that film. A few more specials followed from there. 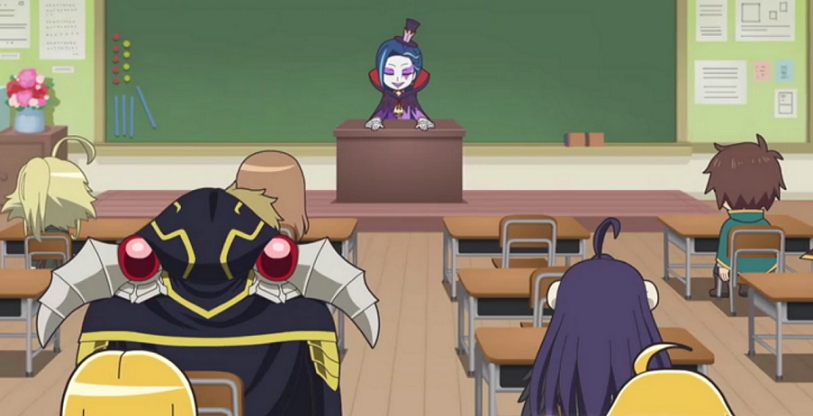 And then there’s the anime series Isekai Quartet, which is a comedic alternate universe crossover series featuring characters from several isekai (“transported to another world”) anime series brought to a school setting. Among the main characters featured are those from KonoSuba, Overlord, Re:Zero − Starting Life in Another World, and Saga of Tanya the Evil. As of this edit (August 5, 2022), I’ve yet to actually see any full episodes of it (partially because I’m not familiar enough with all the shows crossed over, and am afraid that if I see it without familiarizing myself with the other shows, I’d feel excluded from a lot of in-jokes), but it does sound like a strange premise indeed.

But in any case, these three are probably the most notable professionally-done High School AU fics that I’m aware of. I’m sure there may be others.

That’s it for today’s edition. Feel free to leave your comments. If you know of any notable professionally-produced High School Alternate Universe fiction that I overlooked, feel free to mention them in the comments.

I'm a sometimes writer of blogs to Manic Expression. Recurring sub-blogs I write include Why It Just Doesn't Work (WIJDW), Fanfic Subgenres, and Enough Already. I generally write about movies, television, comic books, and fan fiction, though I do branch out into other subjects (that may or may not be related) from time to time. I've posted on Manic Expression almost since its start in 2012.