A Splendidly Stupendous Sense of Unity

This “What if This Character and This Character became Friends” meme originally belongs to topcatmeeces97 is dedicated to all of my friends, fellow artists, fans, and brethren who admire The Splendid Seven consisting of Sesshoumaru, Shuran, Inuyasha, Hakkaku, Ginta, Ayame, and Shunran, The Stupendous Septet consisting of Baki Hanma, Ryoma Sakamoto, Takeshi Sendo, Kiichi “Kiibo” Miyazawa, Ippo Makunouchi, Megumi Minami, and Kaoru, and the deep and meaningful friendship these two groups of seven have with each other. Sit back, relax, and delve into my additional thoughts on The Splendid Seven’s and The Stupendous Septet’s beautiful friendship with each other to the point where they consider each other as family.

I can never get enough of this friendship between seven Yokai martial artists and seven human martial artists. Overlooking how powerful they are together, especially when they join forces in martial arts tournaments and spar with each other in various training sessions, their true strength lies in showing solidarity towards each other, not taking each other for granted, displaying a deep code of honour and integrity, and encouraging each other to be the best versions of themselves. The two strong groups of seven would find unconditional love and interpersonal growth with each other, and no demon, no monster, and no obstacle can ever knock them down.

Sesshoumaru may specialise in Shotokan Karate, Japanese Jujitsu, and Hapkido. Inuyasha may specialise in Kyokushin Karate, Judo, and Taekwondo. Ryoma may specialise in Shorin-Ryu Karate, Japanese Jujitsu, and Judo. However, these three Karateka who also incorporate Jujitsu’s and Judo’s grappling and foot sweeps are filled to the brim with honour, discipline, brotherhood, and courage. The two dog Yokai brothers would even consider Ryoma to be the most honourable combatant they have ever met because he never plays dirty, while Ryoma would consider both Sesshoumaru and Inuyasha to be the most powerful and the most valiant brothers he has ever had the pleasure of sparring with to the point where he looks up to both of them as his role models. Sesshoumaru’s, Inuyasha’s, and Ryoma’s brotherhood and honour in and out of the dojo are truly aspirational.

Shuran’s unparalleled skills in Vale Tudo, Sambo, and Professional Wrestling perfectly compliment Baki’s and Kiibo’s skills in Mixed Martial Arts who incorporate wrestling, boxing, Karate, Jujitsu, and Judo into their attacks. Shuran, Baki, and Kiibo are full of excitement, ecstasy, and elation when they step up to the ring and have a three-way sparring session, for it keeps them fit, active, and thoroughly aware of their opponents’ strengths and weaknesses. Shuran’s raw strength and power, Baki’s relentless takedowns, and Kiibo’s energetic tackles all work in each others’ favour as a means to build each other up as fighters and as individuals. Muscular strength may be the foundation of their physical power, but it is their enthusiasm and willingness to combat powerful enemies that have brought them together. They could not have asked for a stronger bond than what they have with each other.

Sesshoumaru’s accuracy in Shotokan Karate and Inuyasha’s brutality in Kyokushin Karate are also applicable in their sparring matches with Baki’s Mixed Martial Arts moves which incorporate grappling and striking, Takeshi’s boxing prowess, and Kiibo’s Mixed Martial Arts skills which also incorporate grappling and striking. Sesshoumaru and Baki would have a brotherhood that would give the former the chance to be more openly sanguine with others and the latter to never underestimate his opponents, not just have Sesshoumaru grow in muscular strength and Baki grow in focus and determination. Inuyasha may have the tendency to butt heads with Takeshi and Kiibo, although he is much closer to the latter as his best friend/brother from another mother, but they genuinely care for each other and display a deep sense of loyalty and allegiance. Synergy is the name of their game when it comes to staying strong for each other.

Hakkaku’s abilities in Muay Thai and Pradal Serey, Ginta’s talents in Jeet Kune Do and Sanda, Takeshi’s ferocity as a boxer, and Ippo’s dedication also as a boxer go beyond flying fists and fancy footwork, but there is also a sense of brotherhood and interpersonal respect. The willingness they have to challenge each other to reach higher aspirations and persevere throughout every obstacle signifies a sense of interpersonal strength and willingness to better themselves in everything they do. Overlooking their skills in countering strikes and clinches, Hakkaku, Takeshi, Ginta, and Ippo treat each other well in terms of respecting each others’ strengths and giving each other the chance to thrive amongst all challenges, toils, and strifes. No knockout is potent enough to make them surrender let alone stay down for long periods of time.

Ayame’s fierceness in Kickboxing, Koppojutsu, and Nippon Kenpo, Shunran’s agility in Capoeira, Shaolin Kung Fu, and Wing Chun, Megumi’s focus in Aikido, Krav Maga, and Shorinji Kenpo, Kaoru’s grace in Baguazhang, Northern Praying Mantis Kung Fu, and Changquan are what constitute their evergreen sisterhood rich with synergy, warmth, and fortitude. Aside from their physical skills in their respective martial arts, Ayame, Shunran, Megumi, and Kaoru genuinely build each other up in great ways like the sisters that they are and are willing to never give up on each other. Furthermore, Ayame’s fierce determination, Shunran’s bubbly cleverness, Megumi’s fiery levelheadedness, and Kaoru’s nurturing kindness are the hallmarks of what make these wonderful ladies build each other up in the healthiest and most encouraging ways possible. Therefore, their sisterhood is rife with encouragement and solidarity.

Ayame and Shunran always enjoy having Baki, Ryoma, Takeshi, Kiibo, and Ippo as sparring partners and big brothers from other mothers, while Megumi and Kaoru aspire to be just as courageous, fierce, strong, and powerful as Sesshoumaru, Shuran, Inuyasha, Hakkaku, and Ginta. Ayame’s and Shunran’s striking abilities can prove that they can adapt superbly to Baki’s and Kiibo’s grappling, Ryoma’s complete package of striking, grappling, and clinching, and Takeshi’s and Ippo’s predominant striking, especially when Ayame manoeuvres her kicks and punches to overpower Baki, Ryoma, and Kiibo and when Shunran pivots her quick moves to outrun most of Takeshi’s and Ippo’s attacks. Meanwhile, Megumi’s tactfulness and Kaoru’s focus are the traits that could give them the endurance to counter several of Sesshoumaru’s, Shuran’s, Inuyasha’s, Hakkaku’s, and Ginta’s attacks so effectively, regardless if Sesshoumaru and Inuyasha throw an uppercut or an axe kick, Shuran throws a tackle or Hakkaku and Ginta clinch them hard. Besides how the girls can fight just as strongly as the guys, Ayame’s determination and Shunran’s enthusiasm are what constantly bring a lot of light to Baki’s, Ryoma’s, Takeshi’s, Kiibo’s, and Ippo’s days whenever there are moments of doubt and uncertainty. Moreover, Megumi’s courage and Kaoru’s compassion are enough to emit warmth and genuineness in Sesshoumaru’s, Shuran’s, Inuyasha’s, Hakkaku’s, and Ginta’s lives, for they could see these young women as the kind and radiant souls that they are. Interpersonal respect, honour, and warmth are the heartbeats that make the four warrior women admire the ten valiant men to a high degree.

Where romance is concerned, Inuyasha’s and Ayame’s fierce passion, Ginta’s and Shunran’s encouraging lovability, Kiibo’s and Megumi’s dedicated admiration, and Ippo’s and Kaoru’s adorable sweetness are the tonics needed to cure any emotional ails, thus making these four couples worth rooting for no matter what the occasion. As a Kyokushinkai and as a kickboxer, Inuyasha and Ayame may have the fists and feet of fury to take their enemies down, but their fierce brand of intimately unconditional love is derived from solidarity, respect, courage in the face of adversity, and perseverance amidst all the pain and despair. Given how Ginta implements Jeet Kune Do and Shunran implements Capoeira in their attacks against their foes, their speed, power, and timing are coupled so beautifully with the unconditional love they have for each other as well as their undying loyalty, caring nobility, and empowering encouragement. Kiibo’s sheer power as a Mixed Martial Artist and Megumi’s clear focus as an Aikidoka may make them a dynamic power couple, but they also do what they can to build and establish a happy and healthy home. Combining Ippo’s lethal speed in Boxing and Kaoru’s graceful agility in Northern Praying Mantis Kung Fu is what would make them effective in bringing their foes down, but they are also just as effective in being loyal to each other as a loving couple who only want the best for each other and would do whatever it takes to never give up on each other. Whatever flavour is available, Inuyasha’s and Ayame’s fiery spice, Ginta’s and Shunran’s mellow coolness, Kiibo’s and Megumi’s dynamic savouriness, and Ippo’s and Kaoru’s gentle sweetness are all guaranteed to cleanse your palate in the most delightful way.

Nothing is every going to knock this powerful friendship between The Splendid Seven and The Stupendous Septet because they have the physical and mental strength to knock their opponents out, and they all do the work that is required of them to make their genuinely interpersonal relationship thrive and flourish so magnificently. Furthermore, their connected sense of camaraderie is what provides all fourteen martial artists with sufficient solidarity and understanding to boost each other up in positively encouraging ways.

I hope you all enjoyed this, and I will see you in the next submission. Take care, stay safe, and may you continue to find power in good, healthy, and respectful friendships, everybody.

Baki Hanma from Baki the Grappler belongs to Keisuke Itagaki and Group TAC.

Takeshi Sendo and Ippo Makunouchi from Hajime no Ippo belong to George Morikawa and Madhouse. 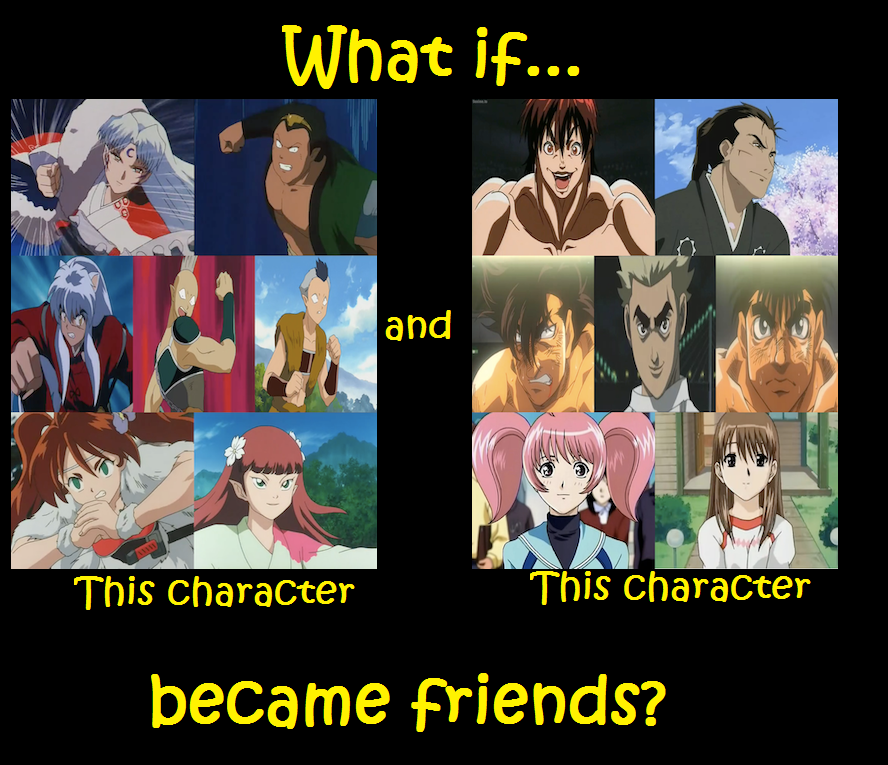