The Best Friendships Come in Sevens

This “What if Person became Friends/Allies with this Person” meme originally belongs to MagicalKeyPizzaDan and is dedicated to those who fancy the idea of The Splendid Seven consisting of Sesshoumaru, Shuran, Inuyasha, Hakkaku, Ginta, Ayame, and Shunran being the greatest of friends with The Stupendous Septet consisting of Baki Hanma, Ryoma Sakamoto, Takeshi Sendo, Kiichi “Kiibo” Miyazawa, Ippo Makunouchi, Megumi Minami, and Kaoru Ichinose. Sit back, relax, and find out how beautiful a friendship between seven powerful Yokai martial artists and seven strong-willed human martial artists can really be.

I mentioned in my previous post regarding a what-if situation for Sesshoumaru, Shuran, Inuyasha, Hakkaku, Ginta, Ayame, and Shunran as children in a predominantly Black American school in Baltimore, Maryland where Charles S. Dutton’s character Roc would be their teacher that I included Baki Hanma, Ryoma Sakamoto, Takeshi Sendo, Kiichi “Kiibo” Miyazawa, Megumi Minami, and Kaoru Ichinose as their friends plus being acquainted with other Black American children in their school. I would love to make good on that development for a great crossover friendship by implementing that idea to have these two groups of seven unite in a symphony of true friendship in times of joy and in times of strife. Where Sesshoumaru and Inuyasha as well as Shuran, Hakkaku, Ginta, Ayame, and Shunran are especially concerned, this is a friendship they would cherish far more than what they have been given in canon, considering that I dare not say the names of Inuyasha’s pathetic excuses of comrades in the same sentence as this entry. Furthermore, this friendship between The Splendid Seven and The Stupendous Septet would work within the realms of my Iron Fist Tournament AU I have in store for not only the main Splendid Seven but also their fighting game mentors from Street Fighter, Tekken, and King of Fighters and many other favourite anime characters because the thought of various anime characters training in their chosen martial arts in one arena while making great comradeships and friendships is my idea of purely unadulterated fun.

Take two mighty dog yokai Ansatsuken specialist brothers in which Sesshoumaru’s style leans towards Shotokan Karate, Japanese Jujitsu, Hapkido, and Marine Corps Martial Arts while Inuyasha’s style leans towards Kyokushin Karate, Judo, Taekwondo, and Brazilian Jujitsu, one hulking panther yokai grappler in Shuran specialising in Vale Tudo, Professional Wrestling, and Sambo, two energetic wolf yokai striker and clincher brothers in Hakkaku being a Muay Thai practitioner and Ginta being a Jeet Kune Do practitioner, one fierce wolf yokai striker princess in Ayame demonstrating her skills in Kickboxing, and one mischievous panther yokai princess in Shunran displaying her moves in Capoeira and you have a septet of strong, powerful, and potent yokai martial artists ready to wipe the competition with their skills. Have said septet of powerful yokai martial artists be great friends with two powerfully built mixed martial artists in Baki and Kiibo, one calm and traditional-minded Karateka in Ryoma who also specialises in Judo and Jujitsu, two volatile yet dedicate boxers in Takeshi and Ippo, one levelheaded Aikidoka detective in Megumi, and one sweet Kung Fu practitioner as well as detective in Kaoru, and you have a a great friendship that would last a lifetime. Not only would they join forces to defeat more formidable opponents as well as test each others’ strength and endurance, but they would also eradicate crime and gang violence and demonstrate solidarity towards each other without any agenda forming against them whatsoever.

The Splendid Seven’s and The Stupendous Septet’s friendship would commence in their childhood, flourish into their adolescence, and develop into deep trust, allegiance, respect, and boundless loyalty as adults. Whenever obstacles became tough, they would demonstrate perseverance and strong willpower. This is also evident in their familial relationships as well as romantic relationships, especially with Inuyasha and Ayame, Ginta and Shunran, Kiibo and Megumi, and Ippo and Kaoru.

As children, 12-year-old Sesshoumaru and 11-year-old Inuyasha would enjoy sparring in Karate, Jujitsu, and Judo with 11-year-olds Baki and Ryoma as well as 10-year-old Kiibo. 11-year-old Shuran would practice wrestling and mixed martial arts with 11-year-old Baki and 10-year-old Kiibo. 10-year-olds Hakkaku and Ginta would spar in boxing with 10-year-old Takeshi and 9-year-old Ippo. 8-year-old Ayame would have a ball in sparring in boxing with 10-year-old Takeshi and 9-year-old Ippo as well as in Hapkido and Aikido with 4-year-old Megumi. 6-year-old Shunran would revel in Capoeira, Kung Fu, and Aikido sessions with 4-year-olds Megumi and Kaoru. Outside their martial arts sparring sessions, the ten boys enjoyed playing soccer, going swimming, and play wrestling, while the four girls enjoyed playing hide-and-seek, chasing each other, and playing with dolls and action figures. There would be occasions where Ayame would occasionally play with Takeshi, Kiibo, and Ippo even to the point where they see her as the little sister they always wanted because of her rambunctiousness. All of the children would even make a vow that their friendship shall be guaranteed to last forever.

As young adults and teenagers, the fourteen combatants would find themselves in various engagements. 22-year-old Sesshoumaru and 21-year-old Inuyasha would win various Karate, Judo, Jujitsu, and Taekwondo tournaments, with their most notable one being the 100-man Kumite. 21-year-old Shuran would triumph in various wrestling, Sambo, and Vale Tudo matches. 21-year-old Baki, 21-year-old Ryoma, and 20-year-old Kiibo would compete in various Mixed Martial Arts matches. 20-year-olds Hakkaku would find himself fighting Muay Thai, Pradal Serey, and Panantukan matches. 20-year-old Ginta would use his Jeet Kune Do techniques in winning various Sanda and Lethwei tournaments. 20-year-old Takeshi and 19-year-old Ippo would engage in a myriad of Boxing matches. 18-year-old Ayame would be victorious in Kickboxing, Koppojutsu, and Hapkido. 16-year-old Shunran would come out on top in various Capoeira, Aikido, and Shaolin Kung Fu tournaments. 14-year-olds Megumi and Kaoru would balance competing in Aikido and Shaolin Kung Fu tournaments respectively with solving the latest mysteries along with their friends from Dan Detective School. When they are together, they would use their martial arts skills not only for winning various tournaments but also bringing criminals to justice and educating young children on the importance of self-defence, self-respect, and having a good attitude in combat.

As adults, all fourteen fighters would balance their combat careers with family life as well as having their progeny grow to be just as formidable and wonderful as their parents. 41-year-old Sesshoumaru and 40-year-old Inuyasha continue to compete in Karate, Judo, Jujitsu, and Taekwondo tournaments while being respectively married to 40-year-old Toran, who is an expert in Wushu and Baguazhang, and 37-year-old Ayame, who still continues to compete in Kickboxing, Koppojutsu, and Hapkido, as well as continuing to run their dojo open to aspiring fighters, their children being just as active as instructors, and their grandchildren being very interested in growing as martial artists. 40-year-old Shuran continues his career in Vale Tudo, Sambo, and Wrestling, has been married to 37-year-old Ayumi, who is a Kenpo and Aikido practitioner, for nearly twenty-seven years, and runs his own wrestling gym alongside her. 40-year-old Baki, 40-year-old Ryoma, and 39-year-old Kiibo continue to stay active in Mixed Martial Arts, weightlifting, and strength training, have been respectively married to 36-year-old Systema specialist Rosé Thomas, 35-year-old Krav Maga specialist Rose Anderson, and 33-year-old Megumi, who is continuing her career as an Aikidoka and detective as well as teaching criminology in Tokyo University, and run their own Mixed Martial Arts bootcamp and gym. 39-year-old Hakkaku is still continuing to compete in Muay Thai, has been married to 36-year-old Kajukenbo and Nippon Kenpo practitioner Karan, and is currently a Muay Thai instructor. 39-year-old Ginta continues to compete in Jeet Kune Do and Sanda, has been married to 35-year-old Shunran, who still competes in Capoeira and Shaolin Kung Fu, and instructs youths in Jeet Kune Do and Sanda. 39-year-old Takeshi and 38-year-old Ippo continue to compete as boxers, are respectively married to 34-year-old Marine Corps Martial Arts practitioner Winry Rockbell and 33-year-old Kaoru, who is continuing her career as a Shaolin Kung Fu Practitioner and detective as well as working as a social worker in a youth centre and a sociology instructor in Tokyo University, and teach boxing to disadvantaged youths who feel the need for better direction in their lives. The Splendid Seven’s and The Stupendous Septet’s great friendship is passed down to their progeny, and they could not have been any happier to see them thrive and grow.

The unbreakability of The Splendid Seven’s and The Stupendous Septet’s friendship knows no bounds. Physical, mental, and emotional strength as well as dynamic interactions are the bedrocks of their friendship, and they will always have each others’ best interests at heart.

I hope you all enjoyed this, and I will see you in the next submission. Take care, stay safe, and stay true to your friends, everybody.

Baki Hanma from Baki the Grappler belongs to Keisuke Itagaki and Group TAC.

Takeshi Sendo and Ippo Makunouchi from Hajime no Ippo belong to George Morikawa and Madhouse. 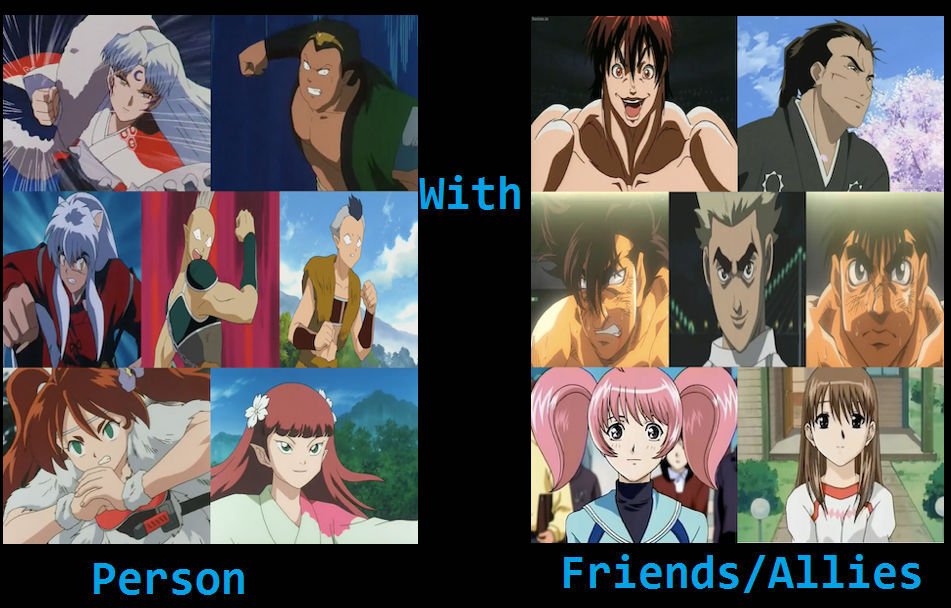