This piece of Sesshoumaru, Shuran, Inuyasha, Sensei Jason, Hakkaku, Ginta, Ayame, and Shunran fan art is dedicated to mcdeb12212, Omniverse-Commander, pen-inkblot, ChilloHaus, SailorUsagiChan, alinabeska, SuiroAtair, Mad-Hatter-LCarol, and PamFanJN who celebrated their birthdays ranging from a few days ago all the way up to today. So, I wish you a lot of love, joy, prosperity, abundance, beauty, strength, and hope on your very special days and in your lives as artists and as people. This is also dedicated to those who fancy the idea of Sesshoumaru, Shuran, Inuyasha, Hakkaku, Ginta, Ayame, and Shunran being mentored by my new OC Sensei Jason, who is actually based on Jason David Frank during the time he filmed The White Ranger Kata for the Power Rangers franchise. Think of this as my belated Canada Day and Fourth of July gift to all of you, my fellow Canadians and Americans. Sit back, relax, and find comfort in this idea show about a young American Kenpo Karate sensei and his seven young wards inspired by Mister T, Karate Kommandos, and Fat Albert and the Cosby Kids, especially in these continuously tumultuous times.

I hope you all had a wonderful Canada Day and an equally wonderful Fourth of July despite all of the recent atrocities that have been plaguing our world. It saddens and angers me to this day that shootings continue to prevail in the United States of America, especially on a celebratory day such as the Fourth of July or American Independence Day, and that the Supreme Court seems to be going several steps backwards in terms of making the country better through Roe vs Wade being overturned. However, I do not want to bring any further animosity than what this world is being sickened with. This is because we are going to find ourselves back in 1996 when Jason David Frank released his second Karate instructional video for the Power Rangers franchise, The White Ranger Kata, right before his character, Tommy Oliver, transitioned from being the White Tigerzord Ranger to being the new Red Zeo Ranger in Power Rangers Zeo. Coupled with that is having a character I made based on Frank’s appearance and attire from that particular Karate instructional video who would have been the Danza to an animated show starring him and Sesshoumaru, Shuran, Inuyasha, Hakkaku, Ginta, Ayame, and Shunran who were very young back in 1996. As I mentioned in my previous posts revolving around Sensei Jason and the Black Belt Crew, this would be a phenomenal show that would cater to both children and adults, for this not only involves martial artists fighting against villains and thwarting unscrupulous characters but also deals with serious topics such as divorce, mass shootings, sexual identity, child abuse, substance abuse, sexism, and racism. I think a show such as Sensei Jason and the Black Belt Crew would be a whole more needed in this day and age because there is just so much sickness and animosity occurring in this world that we need to backtrack and reflect on what is truly important, sane, and beneficial in our lives. After all, Sensei Jason and the Black Belt Crew would clearly demonstrate that martial arts is not just about learning how to strike, clinch, and grapple using all of your body parts, especially your fists, knife hands, arms, elbows, knees, legs, balls of the foot, heels, insteps, and foreheads, to launch attacks against enemies. The martial arts are also about self respect, discipline, dedication, respect for others, confidence, having a great attitude, cooperation, and brother- and sisterhood, and they are never meant for inciting meaningless violence.

In this picture, we have 15-year-old Shotokan Karateka Sesshoumaru, 14-year-old professional wrestler Shuran, 14-year-old Kyokushin Karateka Inuyasha, 22-year-old American Kenpo Karateka Sensei Jason, 13-year-old Muay Thai practitioner Hakkaku, 13-year-old Sanda practitioner Ginta, 11-year-old Kickboxer Ayame, and 9-year-old Capoeirista Shunran being the united family that they are. One noticeable outfit style you will see in Sesshoumaru and Inuyasha is that they are dressed akin to Ryu and Ken from the Street Fighter franchise because they are, as you can tell, the Ryu and Ken of The Splendid Seven. Sesshoumaru’s and Inuyasha’s particular brand of brotherhood is also akin to Ryu’s and Ken’s, given how competitive, fiercely loyal to each other, and formidable they are together, thus making them the glue that binds their family as a whole. What makes their family strong amidst all trials are the following attributes. Sesshoumaru is a disciplined, focused, and reverent warrior. Shuran is a fiercely loyal, indomitable, and warm-hearted bodyguard. Inuyasha is a courageous, strong, and mighty leader. Sensei Jason is a patient, wise, and caring mentor. Hakkaku is an enthusiastic, passionate, and gregarious messenger. Ginta is a caring, kind, and good-humoured cavalier. Ayame is a determined, dedicated, and compassionate encourager. Shunran is a clever, quick-witted, and vivacious genius. They always keep each other on their toes and always encourage each other to be the best people they can be.

When it comes to their physical prowess against their enemies, they do not shirk whatsoever. Sesshoumaru is known for his precise punches, kicks, foot sweeps, takedowns, and grapples that can leave enemies incapacitated thanks to his skills in Shotokan Karate, Hapkido, Brazilian Jujitsu, and Japanese Jujitsu, and his signature attack is his Gorilla Uppercut, Cross Punch, and Roundhouse Kick combo. Shuran is a brutally versatile grappler in Sumo Wrestling, Vale Tudo, Mongolian Wrestling, and Sambo known for his bone-crushing chokeholds, Full Nelsons, Boston Crabs, and bearhugs, and his signature attack is his Bear Claw Fist and Chokehold combo. Inuyasha is ferociously lethal in terms of his penchant for close-contact combat, powerfully brutal blows, and ability to cause collateral damage to his foes through his skills in Kyokushin Karate, Taekwondo, Pankration, and Bokator, and his signature attack is his Dragon Right Jab, Left Jab, and Spinning Back Kick combo. Sensei Jason is a multifaceted yet deadly striker who may specialise in American Kenpo Karate but is also a specialist in Taekwondo, Judo, Jujitsu, Muay Thai, Jeet Kune Do, Kickboxing, and Capoeira with enough high kicks, punches, blocks, and strikes in store, and his signature attack is his Eagle Front Kick and Front Punch combo. Hakkaku is quick and fierce in his clinches, given his training in Muay Thai, Kajukenbo, Panantukan, and Pradal Serey, and his signature attack is his Tiger Shin Kick, Elbow Strike, and Knee Strike combo. Ginta is speedy and fearless in his strikes and clinches as Jeet Kune Do, Sanda, and Lethwei specialist to the point where he has combined Jeet Kune Do and Lethwei into his own style, and his signature attack is his Lion Elbow Strike, Shin Kick, and Headbutt combo. Ayame is a tenacious and terrifying striker known for her series uppercuts, jabs, hooks, cross punches, reverse punches, roundhouse kicks, and spinning back kicks, given her expertise in Kickboxing, Boxing, Nippon Kenpo, and Koppojutsu, and her signature attack is her Whale Shark Reverse Punch and Axe Kick combo. Shunran is a graceful and flexible striker known for her flying kicks, butterfly kicks, split kicks, foot sweeps, knife hands, and backfists, given her expertise in Capoeira, Shaolin Kung Fu, Wushu, and Wing Chun, to the point where she made her own mixed style of martial arts known as Capoeirafu, and her signature attack is her Sea Serpent Spinning Hammer Kick and Knife Hand combo. There is no enemy, no mugger, and no murderer brazen let alone evil enough to take these warriors down.

Overlooking all of the kick-butt action Sensei Jason and the Black Belt Crew would themselves in on a regular basis, they would stick together every single time as a unitedly strong family. Regardless of what tribulations they face, they will never bend or break, for they show solidarity, interpersonal strength, and confidence.

I hope you all enjoyed this, and I will see you in the next submission. Take care, stay safe, and kick injustice and evil in the behind with grace and fortitude just like Sensei Jason and the Black Belt Crew, everybody.

Sensei Jason belongs to me is based on Jason David Frank during his time on The Power Rangers Karate Club: The White Ranger Kata. 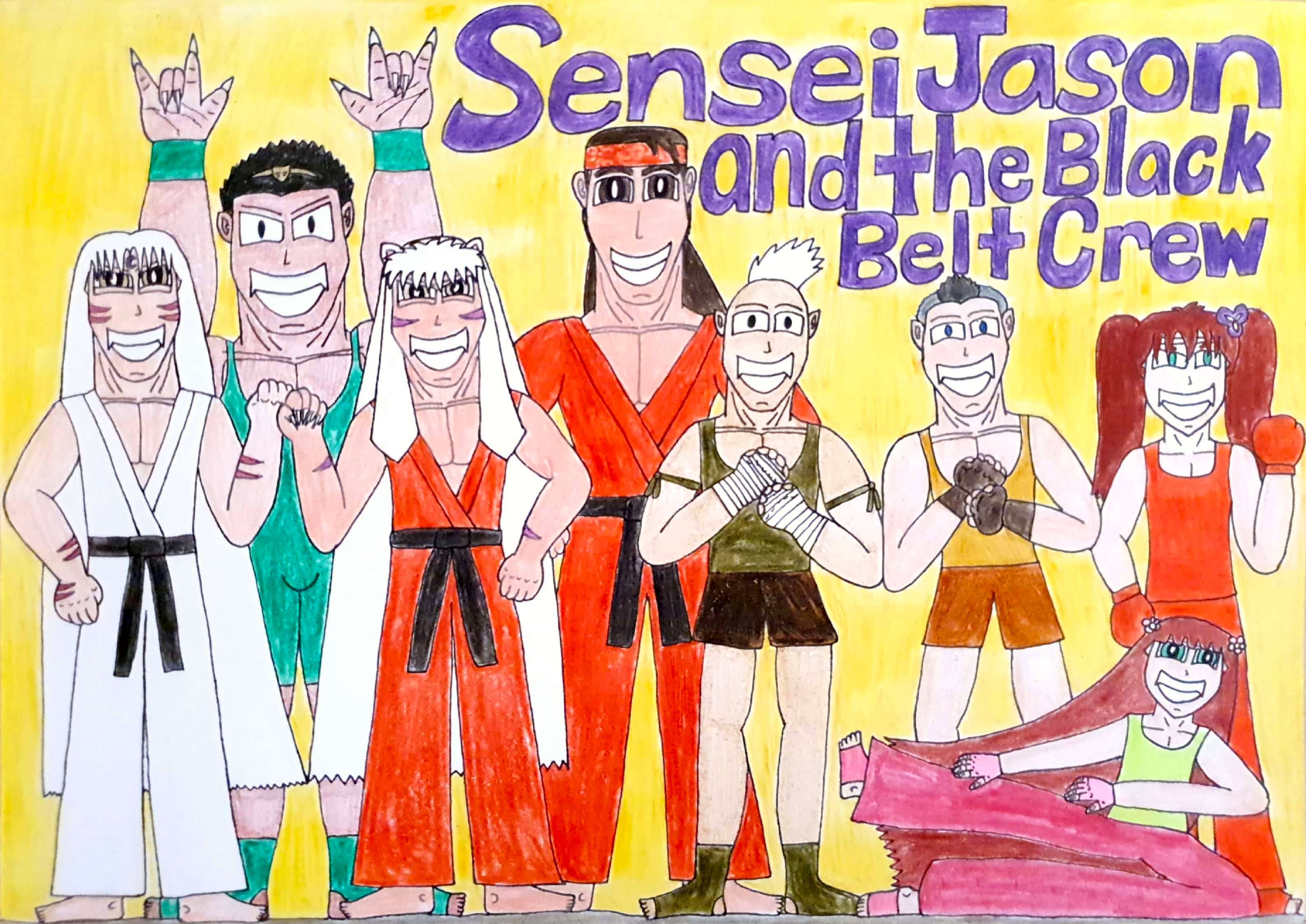