This piece of Hakkaku, Shuran, and Ginta fan art is dedicated to everybody who is invested in Shuran’s, Hakkaku’s and Ginta’s brotherhood. Sit back, relax, and discover how combining a powerful grappler like Shuran with quick clinchers and strikers like Hakkaku and Ginta can cause collateral damage with as much leverage, force, quick reflexes, and tact they can offer.

Shuran: Looks like all of you sitting at home are going to be in for a wild ride when we come for you.

Ginta: So, take notes and listen well, for what we have to declare is neither a joke nor a game.

Shuran: We hold our family with high value and importance. Any attempt to vanquish us will be all for naught because I can break you in two. How, you ask? By getting close to your body and squeezing the life out of you. You want specifics? I’ll give you specifics. I could wrap my hands around your neck and wring it. I could give you bearhugs, back-breakers, neck-breakers, joint locks, headlocks, and many other submission holds I could name off the top of my head that I have learned in my career as a wrestler and a bodyguard. I could deliver palm strikes to your face until it becomes a deformed, bruised, and bloodied mess. I could even take you sorry lot to the ground and choke you out. But, because I am a generous guy and I care so much about Hakkaku and Ginta as my brothers, best friends, and comrades, I am simply going to perform a Full Nelson on you and not let you escape.

Hakkaku and Ginta: Aw, shucks, Shuran. You are the greatest brother guys like us could ever have.

(Hakkaku and Ginta give Shuran a fist bump.)

Hakkaku: Anyways, once Shuran puts you in that Full Nelson, we could do all sorts of attacks on you. I could shin kick and knee strike you multiple times until you suffer from blood loss.

Ginta: I could head-butt you and strike you with my elbows until you suffer from a concussion. Either way, we could inflict so much damage on you–

Hakkaku: that your whole body will shrivel into one bloody mess. And trust us. Nobody is going to weep for you if you dare launch an invasion.

Shuran: We hope we made ourselves perfectly clear. If you think your lame attacks could work on us, you have another thing coming.

(Shuran gets into a stance that is a combination of Sumo Wrestling, Mongolian Wrestling, and Sambo.)

Hakkaku: Because we are all prepared.

(Hakkaku gets into a stance that is a combination of Muay Thai and Pradal Serey.)

Ginta: And any form of escape is beyond futile.

(Ginta gets into a stance that is a combination of Lethwei and Silat.)

The martial arts tournament attires revolving around the match between The Splendid Seven versus Ulrich Wernerstein and his bodybuilder goons strike again, as 39-year-old Hakkaku, 39 going on 40-year-old Shuran, and 38 going on 39-year-old Ginta are suited up to kick a lot of butt.

Standing in the centre is Shuran whose outfit is a combination of E. Honda’s mawashi as well as Zangief’s wrist bands and ankle bands, except his ensemble is all emerald green with some gold. This illustrates how adept Shuran is in the Eastern wrestling styles of Sumo and Mongolian Wrestling and in the more Western styles of Sambo and Vale Tudo, thus becoming a most formidable opponent to anybody who dares to challenge him.

On the left is Hakkaku in his Muay Thai attire akin to Sagat and Joe Higashi but in his signature colour of forest green. While he is also adept in Pradal Serey and Kajukenbo, Hakkaku’s main martial art is indubitably Muay Thai, for he combines rapidness and lethal takedowns through his clinches, elbow strikes, knee strikes, and shin kicks.

On the right is Ginta in his Lethwei attire almost akin to Adon and his short design is almost akin to Lei Wulong’s, except in his signature colour of light brown. He even combines Silat, Sanda, and Jeet Kune Do in his fighting style to make him lethal, especially in his shin kicks, knee strikes, elbow strikes, and head-butts.

Shuran, Hakkaku, and Ginta are capable of combining their fighting skills to give their enemies a huge beating they are never forget, especially when Shuran implements his Full Nelson and Ginta and Hakkaku use their elbows, knees, and shins to cause collateral damage.

Shuran, Hakkaku, and Ginta from Inuyasha belong to Rumiko Takahashi and Sunrise. 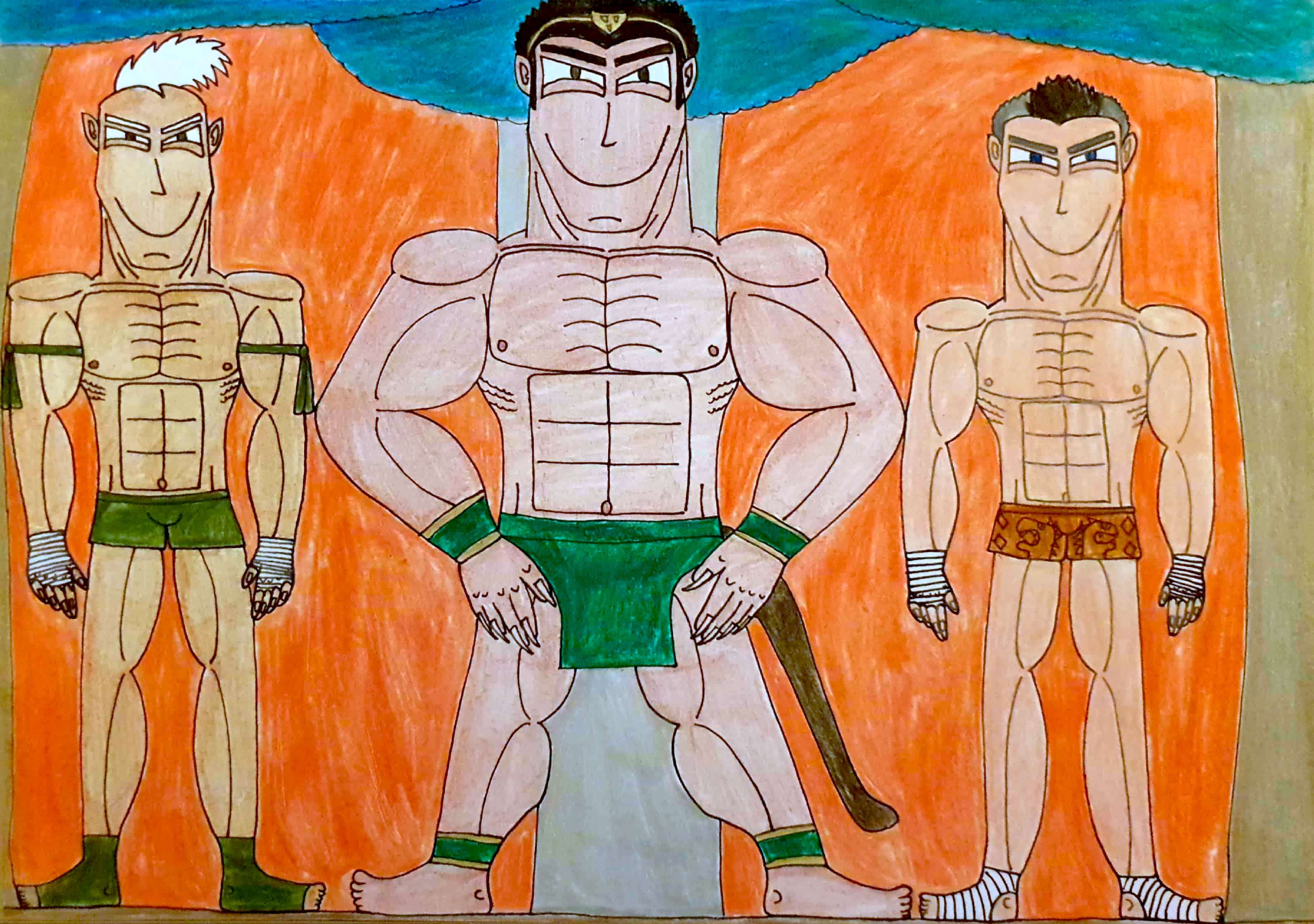