This piece of Ayame and Shunran fan art is dedicated to danytatu, Sirena93, KBinitialDream8250, ep462, Glee-chan, Akus4ever, LeakeyAnimation, LizithaOTAKU, mblairll, Wolf-KunChan, and EddsworldFanboi2004 who celebrated their birthdays ranging from last week to yesterday. I hope you all had wonderful birthdays, and I wish you a lot of love, joy, and prosperity in your lives as artists and as people. This is also dedicated to everybody who is invested in Ayame’s and Shunran’s sisterhood. Sit back, relax, and find out why prominent strikers such as Ayame and Shunran should never be underestimated.

(The Splendid Seven’s elaborate cave home gym. Ayame works on her uppercuts, jabs, hooks, cross punches, haymakers, reverse punches, overhand punches, front kicks, and side kicks on one punching bag, while Shunran works on her roundhouse kicks, spinning back kicks, crescent kicks, flash kicks, shuriken corks, boxcutters, cart double full hyper hooks, knife hands, and backfists on the other punching bag. The intensity that both Yokai warrior women emit on those bags is really high that the gym feels like it is shaking akin to an earthquake. Their finishing blow is an uppercut, hook, spinning roundhouse kick combo. Ayame and Shunran then look at the audience.)

Ayame: Hey, I hope you all enjoyed watching what we’ve been doing.

Shunran: Because we could use those moves on you if you’re not careful.

Ayame: Let’s just say that one false move on us, one inappropriate grope, and/or one slip-up can mean that you are going to enter a world of agony when you cross our paths.

Shunran: We’ll make sure that your bodies will end up badly bruised even if you fall on your knees.

Ayame: You might think that just because I have been married to Inuyasha for over twenty-seven years that I would rather have him beat you to a pulp and have his buff body be bathed in your blood.

Shunran: And you might think that just because I have been married to my darling Ginta for nearly twenty-five years that I would just play the “obedient housewife” and let him do all of the work. Well, we have news for you.

Ayame and Shunran: You are damn wrong!

Ayame: I could mercilessly knock you down with my fists before you could open your insulting mouth if you think it’s okay to try to have your way with me.

Shunran: As for me, I could turn my feet and legs into weapons of mass destruction just to make you numb if you think I am worth groping.

Ayame: Whatever you think you can do with us and with our family–

Shunran: We would never dare to back down, and we can dish out a whole bunch of strikes to put you out of business.

Ayame: I’m always prepared to give you felons knockouts to my heart’s content.

(Ayame gets into her kickboxing stance.)

Shunran: I’m always ready to deliver my kicks to make you fall down.

(Shunran gets into her Capoeira stance.)

Ayame and Shunran: Either way, you’re going down really hard like a bomb about to go off. (Ayame throws a left jab, while Shunran throws a roundhouse kick.) HYAH!

Ayame’s outfit is predominantly inspired by Cammy White, a bit of Chun-Li, and a slight amount of Nina Williams in terms of the overall ensemble. Ayame’s all-red ensemble demonstrates that she is a kickboxer and boxer who is never to be messed with who can deliver a barrage of punches and kicks to any and every felon who dares to put her down. She could very well be an honorary member of Delta Red due to her strength and agility.

Shunran’s outfit is a somewhat tamer version of Christie Monteiro’s and Elena’s outfits, given that they are also Capoeiristas, while maintaining her signature design from the show. Her outfit demonstrates the East and West influence of her martial arts style that combines Capoeira’s dance-like movements with Shaolin Kung Fu’s lethalness, thus making Shunran be thoroughly defined by her flexibility and cleverness.

Ayame and Shunran are mighty warrior women never to be messed with, and they have the moves to prove it, especially when it comes to Ayame and her powerful punches as well as Shunran and her kinetic kicks.

Ayame and Shunran from Inuyasha belong to Rumiko Takahashi and Sunrise. 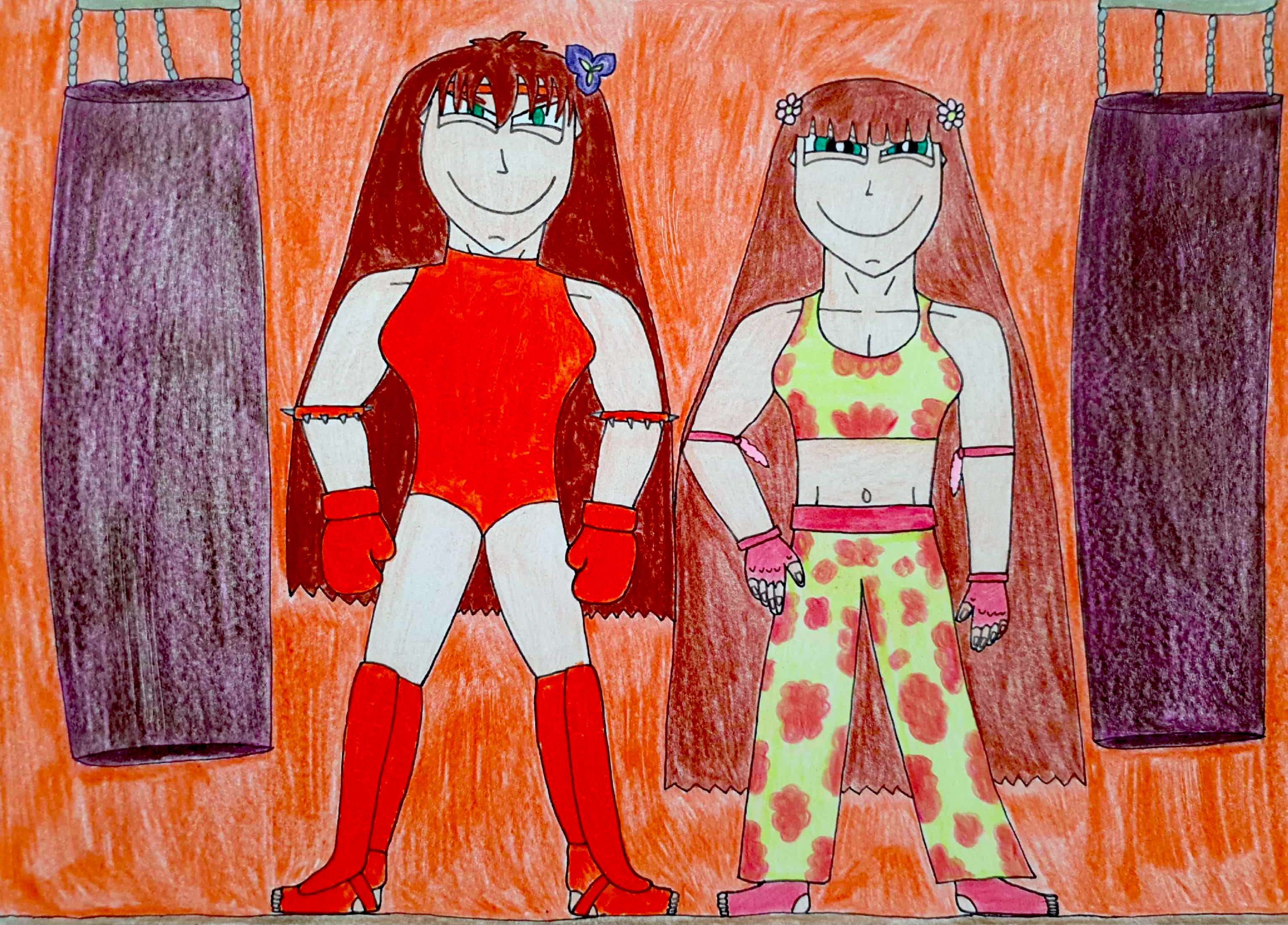