Training Time with a Catch

Jun 12, 2022 Anime, Ayame, fan art, Inuyasha, Inuyasha/Ayame, Next Generation
This piece of Inuyasha x Ayame and InuAya next-gen fan art, which is my second submission for mysterysneeze’s contest is dedicated to dawnlovesham, SarahDoesCartoons, HumbleIronhide, dial102394, doodledanky, jailbaitCAT, and Enthriex who celebrated their birthdays ranging from last month until today. So, I hope you all had wonderful birthdays, and I wish you a lot of love, joy, and prosperity in your lives as artists and as people. This is also dedicated to all of the wonderful InuAya shippers of the world. Sit back, relax, and revel in how Inuyasha and Ayame train their second eldest daughters Momoko, Makoto, and Mikoto to be mighty warrior princesses with fists of iron, the strength of fourteen lions, and the speed of seven cheetahs.
We find ourselves once again in Feudal Era Japan over seventeen years ago before Momoko, Makoto, and Mikoto became the fierce fist-fighting firebrands they are known to be today. Before these three young women crushed their enemies with their bare hands with a huge repertoire of punches as well as their fleet feet with an amazing range of kicks, 5 going on 6-year-olds Momoko, Makoto, and Mikoto were rowdy young girls who always loved to spar with their seven older brothers and be very close to them, thus enjoying the boys’ company more than the girls.
22 going on 23-year-old Inuyasha may have been a champion fighter in the Northern Yoro Tribe’s equivalent to Bokator, Pankration, Ancient Greek Wrestling, Ancient Greek Boxing, and Kapu Kuialua. His beloved 19 going on 20-year-old wife Ayame may have been a champion fighter in the Northern Yoro Tribe’s equivalent to Kickboxing, Boxing, Shorinji Kenpo, Nippon Kenpo, and Judo. However, they never rested on their laurels as champions and used their skills to train young warriors, especially their children, to grow stronger, to use martial arts to protect, defend, and show solidarity to others, and to never surrender even when obstacles are more insurmountable than they think. In fact, in Inuyasha’s and Ayame’s household, their motto has always been anybody and everybody can be a strong warrior, regardless if they are a boy or a girl, and everybody should pull their weight in battle as well as in training. It was through Inuyasha’s super strength and Ayame’s boundless courage that their children aspired to be as strong as their dear father and brave as their beloved mother, which Momoko, Makoto, and Mikoto aspired to do when they were little girls.
One tradition that Momoko, Makoto, and Mikoto did with their parents growing up was traversing to their favourite secluded training ground where the grass had a uniquely dark shade of green and the mountains were toweringly high and mighty. The land they stepped on had a very special green dust that did not affect Inuyasha and Ayame, but affected their three daughters. Inuyasha got into his Bokator stance, while Ayame got into her Kickboxing stance. Momoko, Makoto, and Mikoto also got into their stances which were a combination of Bokator and Kickboxing. As soon as Momoko, Makoto, and Mikoto pivoted their legs to give their parents a combo attack consisting of a roundhouse kick, a spinning back kick, a left jab, and a right jab, they inhaled that special green dust and let out a sneeze. Despite the distraction, one positive side effect was that the green dust heightened the three girls’ senses and accelerated their speed, instead of blinding them, when they were sparring with their parents. Every punch, kick, and grapple Momoko, Makoto, and Mikoto delivered to Inuyasha and Ayame was rapid, powerful, and totally impactful. After the three girls had their final tackle with their parents, Inuyasha and Ayame told them how proud they were because Momoko, Makoto, and Mikoto were on their way to grow up to be powerful warriors. With their training done, Inuyasha, Ayame, Momoko, Makoto, and Mikoto joyfully went home to unite with the rest of the family for a cool, refreshing after-training swim in the lake.
I hope you all enjoyed my second entry of mysterysneeze’s contest, and I will see you in the next entry. Take care, stay safe, and please show your love for Inuyasha and Ayame as a couple as well as make more InuAya next-gen characters, everybody.
Momoko, Makoto, and Mikoto belong to me.
Inuyasha and Ayame from Inuyasha belong to Rumiko Takahashi and Sunrise. 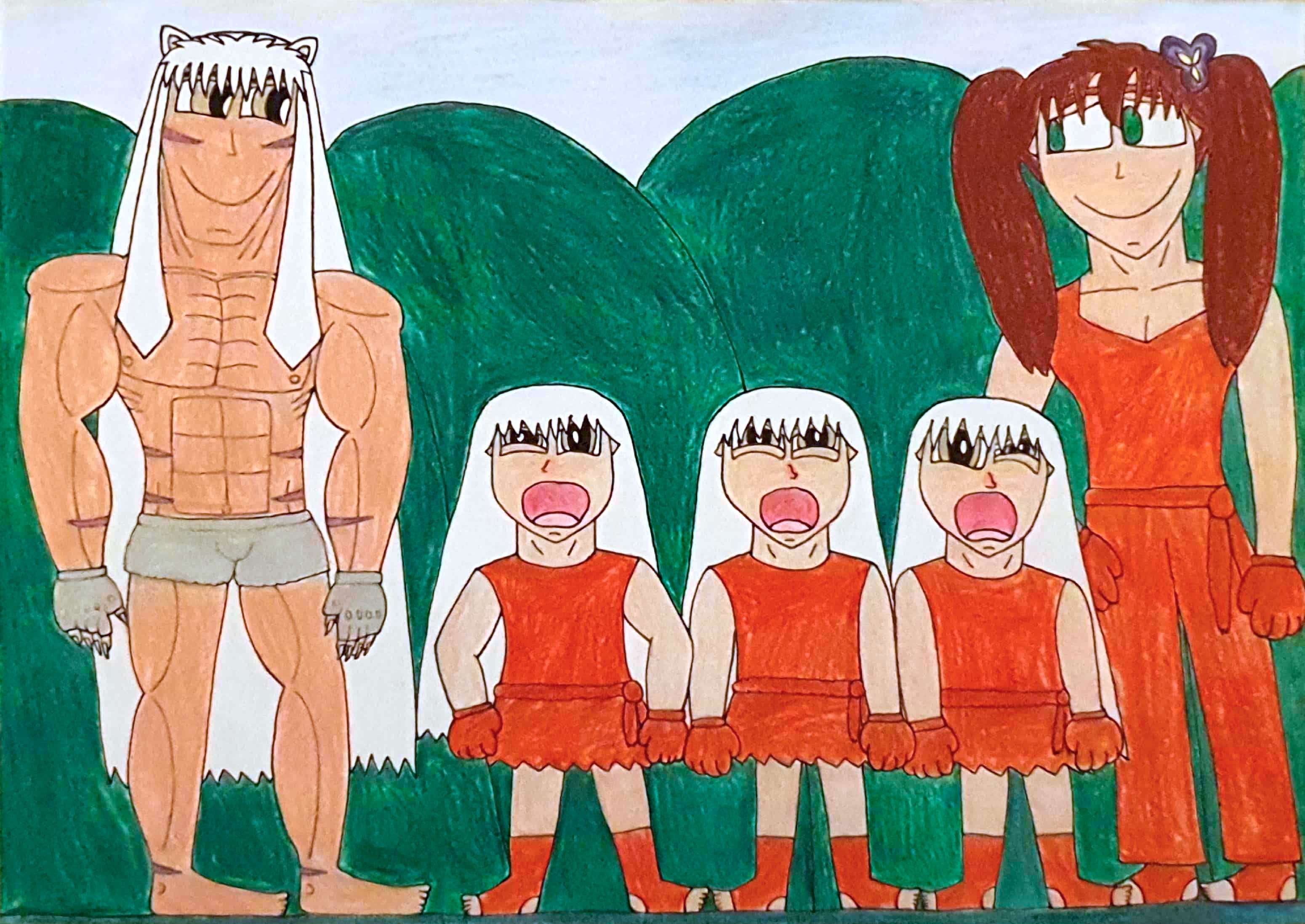