You Don’t Wanna Fly Me to the Moon

Still, but I know someone wrote this song before
and I can tell you where it’s from.
The four, seven, three, six, two, five, one
to put your mind at ease.

You don’t wanna fill my heart with song
and let me sing forevermore.
But you are all I long for,
all I worship and adore.
In other words, you don’t gotta stay true.
But in other words, I still love you.

This is also dedicated to those who like the idea of Souta and Rin being in a rather romantic relationship, although, spoilers, this scenario demonstrates that their little date was one-sided and feel that their hearts and beings belong to Kanna and Kohaku respectively. Therefore, do expect some hints of Kohaku x Rin and Souta x Kanna to occur. With that said, I hope you all enjoy this situation I curated for Souta and Rin based on one particular song mashup, everybody.

It wass late afternoon in Feudal Era Japan’s daffodil fields. 15-year-old Souta the fourth son of Shuran and 14-year-old Rin the first daughter and fifth overall child of Sesshoumaru have just completed another Jujitsu, Judo, and Karate sparring session in Sesshoumaru’s dojo. To the outside eye, one would think that Souta and Rin are officially boyfriend and girlfriend. After all, brothers Kohaku and Souta seemed like the perfect candidates to be Rin’s suitors. However, there is more to uncover with what has actually occurred between these two young souls. In short, just as Souta was about to get serious with Kanna in their relationship and Rin wanting to go to the next stage with Kohaku in their already established relationship, they ended up falling for each other for a while, but they realise it did not work. At least they still admired each other as really good friends and only wanted what was best from each other.

It all started when Kohaku and Rin were going steady after one year of dating, while Souta and Kanna were slowly getting accustomed to seeing each other more than just companions. However, Rin started to admire Souta a lot more because he was just as strong and determined of a fighter as his older brother Kohaku was, while Souta was more drawn to Rin’s bubblier personality rather than Kanna’s pensiveness. When Souta confessed to Kohaku that he really liked Rin, Kohaku was initially in disbelief until Rin talked to him about it. Kohaku, although feeling sad and disgruntled about the news, did not want to stoop so low to beat Souta up with his fists because he thoroughly cherished the closeness and the camaraderie they have always had as brothers. Instead, he wished his younger brother well with his relationship with Rin. Where Rin communicating with her best friend/cousin Kanna about her feelings for Souta was concerned, Kanna was relatively all right with Rin going out with him, was not jealous, had zero ulterior motive, and also wished her best friend well with him. The seeds of Souta and Rin dating started to flourish.

Souta and Rin did manage to go steady with each other. At least the good thing about Souta and Rin in a relationship was that Kohaku continued to concentrate on his training in Jujitsu, Karate, Taekwondo, Muay Thai, and Sanda with his father Shuran and his uncles Sesshoumaru, Inuyasha, Hakkaku, and Ginta, while Kanna continued to sharpen her skills in Judo, Nippon Kenpo, Shorinji Kenpo, Capoeira, and Crane-Style Kung Fu with her aunts Ayame and Shunran while also learning about medicine and herbs from Doctor Suikotsu and Lady Kikyou. Through Souta’s and Rin’s time of being boyfriend and girlfriend, they started to appreciate the fact that they had a lot in common such as their love of nature, their aspiration to become just as strong as Sesshoumaru and Inuyasha as fighters, and how they made sure that they did not abuse their martial arts skills by any stretch of the imagination. They also had a real knack for helping out people in peril. However, their relationship was about to come to an end after a year.

Summer meant that daffodils came into full bloom, and the daffodil field was one of Souta’s and Rin’s favourite places to go to. While they were usually jolly together, both Souta and Rin thought it was a good time to finally admit what they have wanted to say all this time. Confessions were said, with Rin being the first to say that Souta was a strong, charismatic, and lovable guy, but she really missed Kohaku because he understood her more, was more mature, and always wanted what was best for her and she for him. Finally, Souta confessed that he liked Rin with all his heart, but he realised that she needed to be with somebody who could be more patient with her, and he always believed that Kohaku was the right guy for her. He even admitted that he used to be very jealous of Kohaku for being the apple of Rin’s eyes and wanted to challenge him in a Jujitsu match. However, after their bout, he and Kohaku how pointless it was, especially when Souta’s companionship with Kanna developed in closeness and warmth. Furthermore, he admitted to Rin that being with Kanna made him feel at peace with himself and gave him more purpose in life. With everything being out in the open for both Souta and Rin, they broke up on amicable terms and kissed each other on the cheek. At least they were still the best of friends.

After what happened, Souta confessed to Kohaku that his whole relationship with Rin was finally over. Kohaku even stated that he could never stay mad at Souta for what initially happened and was at least happy to see that he made the right decision. Souta inquired Kohaku if he really loved Rin, to which Kohaku said yes because of her compassion, her understanding heart, and her willingness to stay strong and do the right thing. Kohaku also inquired Souta if he also loved Kanna, to which Souta responded with a firm yes because she always encouraged him to do good, believed in him every step of the way, and was also a graceful, kind, and steadfast soul who never allowed to hurt anybody. Meanwhile, Rin also conversed with Kanna about her breakup with Souta, to which Kanna stated that she was never upset with her best friend over a boy like him. The girls even confessed to each other that they really loved Kohaku and Souta because of their loyalty, strength, and truthfulness, not just their handsome charm. The next day then saw Kohaku being happily reunited with Rin as well as Souta being happily reunited with Kanna as boyfriend and girlfriend, thus living happily ever after. Kohaku’s and Rin’s marriage as well as Souta’s and Kanna’s marriage is an entirely different story.

When making this piece of work and listening to the song mashup, I thought about how adorable Souta and Rin would be together. However, as much as I like the pairing as well as the fan art of them as a couple, Souta x Rin would be more of a scenario where they liked each other and went out on lovely dates, but something of extra dimension was missing. Therefore, I hope you enjoy wackobruh’s rendition of the song mashup while looking at this piece of Souta x Rin fan art, everybody.

Into the Homage (Homage x Fly Me To The Moon Mashup-ish?) by wackobruh

I hope you all enjoyed this, and I will see you in the next submission. Take care, stay safe, and, to all the Souta x Rin shippers, please give more love for this pairing if you want to, everybody.

Souta Higurashi and Rin from Inuyasha belong to Rumiko Takahashi and Sunrise. 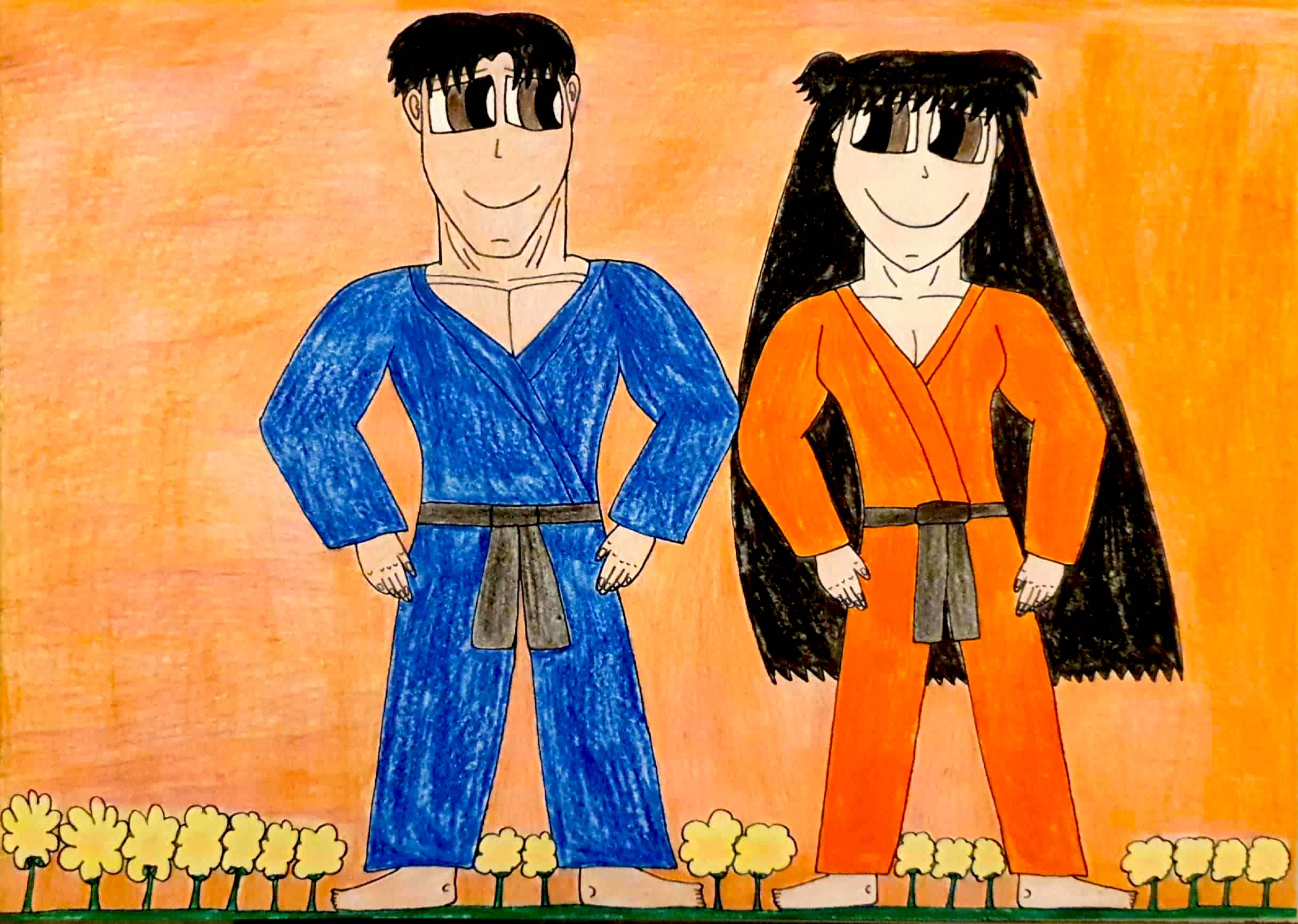