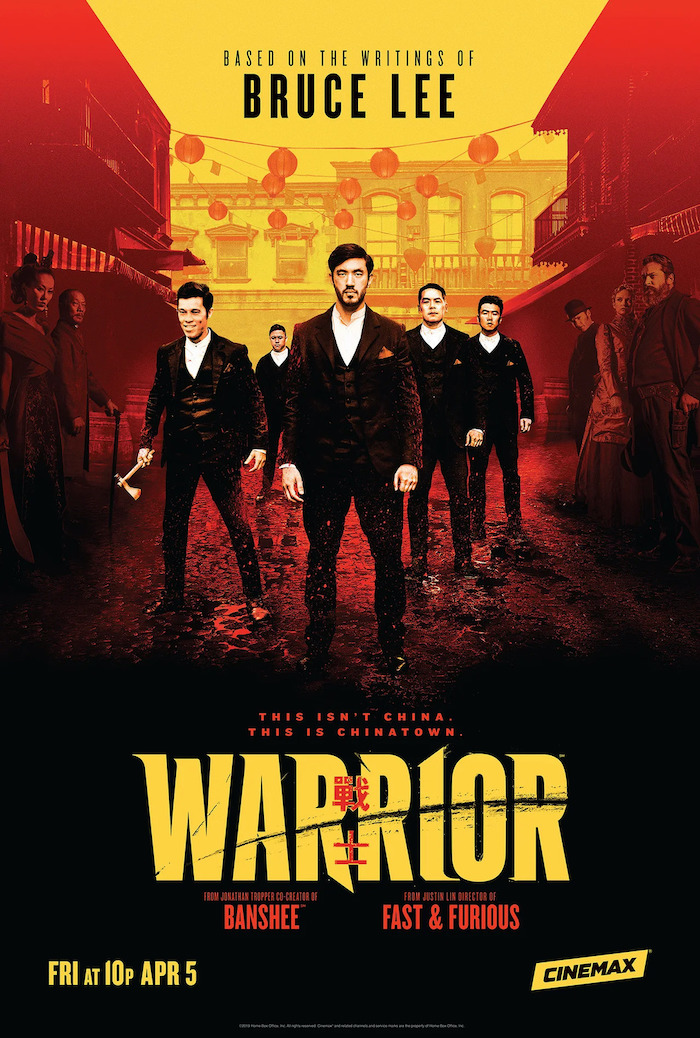 Jonathan Tropper’s TV show Warrior, which premiered on Cinemax in 2019, brings to life a failed pitch Bruce Lee made for a series dramatizing San Francisco’s Tong Wars.  Executive-produced by Bruce Lee’s daughter, Shannon Lee, among others, the action-packed serial centers around the exploits of Ah Sahm (Japanese-British Andrew Koji), a Chinese immigrant who becomes a hatchet man for the Tong known as “Hop Wei”.  Warrior seems to have earned a modest cult following, especially after HBO Max posted the first two seasons.  After I finish each one, I’ll review my favorite episode from each Asian-American director. (Although, some of these directors only helmed one Warrior episode each.) All synopses come from official press materials; all name-dropped Asian entertainers have Chinese descent unless otherwise noted.

The Blood and the Sh*t

“Transporting precious cargo via stagecoach through the Sierra Nevada, Ah Sahm and Young Jun (Jason Tobin) are forced to spend the night with three strangers at a frontier saloon in the middle of nowhere. The detour turns perilous when Harlan French (Christiaan Schoombie), a notorious outlaw, shows up with his henchmen, looking for a lucrative payday.”

Sending Ah Sahm and Young Jun out of San Francisco for this episode serves the dual purpose of refreshingly changing Season One’s pace halfway through, and fleshing out their friendship.  Despite the shift to a less urban setting, the episode maintains thematic consistency with the rest of Warrior, through its cynical depiction of anti-Chinese discrimination.  With a cast of Asian, Caucasian, and indigenous actors depicting a time of high racial disparity, the template of intimidating strangers winning over skeptics under their protection gains a poignant new layer; although I haven’t seen the script’s inspiration, The Hateful Eight.  Considering the influence of Japanese cinema on Western movies, it almost feels poetic to find an Old West tale boasting a Japanese lead actor.  Even though not all of this show’s Caucasian characters hate Chinese people, the line between “good white person” and “bad white person” blurs when Harlan quickly shifts from saving Young Jun from castration by Mason (Craig Urbani), to attempting to rob Ah Sahm’s and Young Jun’s party.

Impulsive Young Jun, long-time Hop Wei member, provides a fascinating contrast to solemn newcomer Ah Sahm, with whom he does share an engaging camaraderie.  Young Jun’s status as a second-generation immigrant justifies his cynicism, when he laments that his disconnect from his the culture of his father – Hop Wei leader Father Jun (Perry Yung) – makes him feel as out of place among other Chinese people as among Caucasians.  Ah Sahm’s and Young Jun’s varying degrees of familiarity with America even come through during the “anything goes”-style fight scenes, which prove as brutal and engaging as I can expect from Thai-American Kevin Tancharoen.  Young Jun mostly fights with weapons, as do other characters assimilated into or born in America.  In juxtaposition, Ah Sahm relies on his former home’s hand-to-hand combat techniques, yielding additional gruesome results.

Bartender Lu (CS Lee) contributes a distinct Chinese-American perspective on the late 19th century.  As a manual laborer who eventually opened up his own business, he makes money through more honest means than Tong members do.  However, his backstory teaches that the majority of Caucasians would only respect people of other ethnicities for their own benefit – and even then, not to the extent of paying Lu fairly for his labor.  Judging by his statement of rarely receiving Chinese patrons, his current entrepreneurial position still amounts to serving white people for money.  Lu does prove that systemic discrimination hasn’t rendered him submissive, such as when he and his wife Billie (Erica Wessels) both help protect the bar from the bandits.

Lu’s blissful marriage to Billie delivers a necessary depiction of a functional interracial romance.  The episode before this one sees Penelope “Penny” Blake (Joanna Vanderham) begin to cheat on Samuel Blake (Christian McKay), the mayor of San Francisco, with Ah Sahm, as reward for saving her life in the second episode.  With Lu and Billie, Warrior gains a relatively less sinful example of love transcending racial boundaries.

Young Jun’s own love interest in this episode, Native American prostitute Wankeia (Rachel Colwell), likely wouldn’t present the most empowering depiction of an indigenous woman; her silence and profession reflecting the Old West’s limited education and career opportunities for women of color.  On the positive side, Jason Tobin sells the plainly stated notion of Young Jun finding a kindred spirit in another societal outcast, as opposed to simply adoring Wankeia for her physical beauty.  During the climax, she also defies the impression that Native Americans in Westerns need non-indigenous people to protect them from selfish Caucasians.

The closest thing I could find to a flaw with this story concerns Harlan’s motivations for the second attack on Lu’s bar.  It doesn’t seem like the episode ever explains how he knows exactly what type of “precious cargo” Ah Sahm and Young Jun must transport back to Father Jun.  The Western tone and aesthetic convinced me to overlook this, and just enjoy the adventure as an old-fashioned thrill dashed with social commentary.  Given the high quality of the performances and set pieces, I can excuse the contrived writing of a one-off baddie.  “The Blood and the Sh*t” adds an exciting buffer to Warrior Season One’s midpoint, while reinforcing the importance of companionship in a ruthless society.

They Don’t Pay Us Enough To Think

“After a bloodbath on the streets of Chinatown, the Hop Wei and Long Zii consider a novel way to end hostilities. Ah Toy (Olivia Cheng) and her real-estate business partner, Leonard Patterson (Frank Rautenbach), hit a fork in the road in their effort to buy a valuable piece of land. After promising jobs to Dylan Leary (Dean Jagger)’s Irish workers, Byron Mercer (Graham Hopkins) toasts senator Robert Crestwood (Patrick Baladi) at a fundraiser, while Penny struggles to hold her tongue. Mai Ling (Vietnamese/Chinese-Canadian Dianne Doan) warns her brother, Ah Sahm, against waging a battle he may not win.”

The more plot-relevant of the two Warrior episodes discussed here demonstrates the series’ captivating exploration of San Francisco’s 1870s pecking order.  The various ongoing plot lines divide our attention between Chinatown’s Tongs and prostitutes, working-class white denizens/citizens, and politically-powerful white citizens.  Each of San Francisco’s social classes contains people who survive through unscrupulous business, but the Tongs and prostitutes earn the viewers’ sympathy as people making the most of desperate situations.  When considering the period’s patriarchal atmosphere, it feels even more intriguing to see the ruthless lengths that vigilant brothel owner Ah Toy and Long Zii’s ladder-climbing Mai Ling will take to accumulate and exert power.

Throughout Season One, most of the Asian actors emphasize their characters’ isolation by speaking fluent English among each other, but switching to broken English when addressing Caucasians.  When the latter group hears Chinese characters’ personal conversations in Chinese, the spoken translations for the audience become reminders of the importance of understanding marginalized perspectives on society.  Due to Ah Sahm inheriting some American lineage from his grandfather, Andrew Koji and his writers emphasize Ah Sahm’s isolation without resorting to broken English.  While he does demonstrate the ability to converse intelligibly with Caucasians, he usually prefers to say nothing at all to them.

Despite Ah Sahm’s tendency to disappear for long stretches of this episode, he remains an engaging protagonist.  His devotion to the Hop Wei requires him to unquestionably follow orders from Father Jun, yet he still seems in control of his direction in San Francisco.  His agreement to duel Long Zii lieutenant Li Yong (Chinese-Indonesian Joe Taslim) comes off at this point as an attempt to ensure himself that despite Mai Ling’s rejection in the first episode of his offer to bring her back to China, and Penny’s termination in this episode of their affair, he still has purpose in America.  He goes so far as to disregard advice to drop out of the life-risking duel, knowing that a loss could both weaken the Hop Wei’s hold on the drug trade, and embarrass himself.  Through Ah Sahm, Koji and the creatives tackle the task of presenting a protagonist as both dutiful, and proactive.

This episode draws its title from a quote by Bill O’Hara (Kieran Bew), an Irish-American cop assigned with lessening crime in Chinatown.  Warrior‘s attempts to endear him to viewers usually prove ineffective to me; in this particular story, any admiration I would’ve given him for refusing to support political supporters of the Chinese Exclusion Act feels canceled out by his own act of brutality later on.  I have noticed the irony of the oppressed becoming the oppressors, but his plotlines more often than not leave me anxious to resume focus on characters enduring a larger degree of discrimination.

A mixed martial artist and stuntman, Lin Oeding helped provide this episode with thrilling and visually stimulating fight scenes.  The opening battle between the Hop Wei and the Long Zii begins this episode in chaotic fashion, as a countless number of gangsters engage in fascinatingly choreographed killings.  A later brawl between Ah Sahm and some masked opponents impresses on a more intimate level; between the focus on Ah Sahm’s need to survive the unexpected obstacle, and the long takes showing off everyone’s skills.  Across all of the fight scenes, the total amount of onscreen blood seems to reach a tolerable level: Neither unnaturally low, nor nauseatingly high.  The goriest sights of both of these episodes go by very quickly.

Caucasians who engage in systemic racism boast understandable motivations, such as maintaining peace and creating jobs.  However, the show doesn’t ask the viewers to forgive their bigotry.  In this episode, it becomes especially explicit when Penny objects the Chinese Exclusion Act, by attempting to point out hypocrisy of white men banning immigrants from a country that didn’t originally belong to them.  While this opinion doesn’t gain much traction in her patriarchal social circle, her lingering empathy for Ah Sahm helps her to nonviolently demonstrate resilience and a headstrong attitude.  Overall, “They Don’t Pay Us Enough to Think” successfully provides several compelling perspectives of San Francisco on the brink of the Tong Wars.