May 21, 2022 Anime, Ayame, fan art, Inuyasha, Inuyasha/Ayame, OTP
This piece of Inuyasha x Ayame or InuAya fan art, which is my twenty-sixth submission for my 30 Days of InuAya month, is dedicated to StrawberryPon, 1987arevalo, darklove1029, CTW36, mystery79, and JQroxks21 who are celebrating their birthdays today. This is also dedicated to the wonderful InuAya shippers of the world. Sit back, relax, and revel in Inuyasha and Ayame in their full Yokai forms, especially when Inuyasha is doused in honey and olive oil for his skin and rippling muscles to glean in the sunlight and Ayame is battle-ready as always.
(Inuyasha’s and Ayame’s cave gym. Inuyasha, approaching 40, and Ayame, approaching 37, are in their full Yokai forms, given their red eyes with blue slits, with him wearing nothing but a protective cup made from silver wolf fur and her wearing a headband, a tank top, and pants made from the fur of the Fire Rat. Inuyasha is smearing his entire muscular body with an emulsion of bee’s honey and olive oil in front of the mirror, while Ayame is doing deadlifts. As soon as Inuyasha is done smearing his entire front body, he invites Ayame to come spread some more of the oil emulsion on his back.)
Inuyasha: Oh, babe.
(Ayame stops her deadlifting session.)
Ayame: Yes, darling.
Inuyasha: Would you care to smother some more of that honey and olive oil emulsion for your precious hubby?
Ayame: It would be my pleasure.
(Ayame dips her hands onto the honey and olive oil emulsion and spreads it all over Inuyasha’s back, shoulders, arms, buttocks, thighs, and calves. As she sinuously massages Inuyasha, he proceeds to flex his bulging biceps and moan in a virilely sensual manner, with a low and rumbling voice.)
Inuyasha: Oooooooh….Ooooooh….It feels really great to have my big muscles being well tended to.
Ayame: Mmmm….It sure is.
Inuyasha: Hey, check this out, Ayame.
(Inuyasha makes his pectoral muscles bounce.)
Ayame: Ooooohhhh…..What a gorgeous sight.
Inuyasha: My pecs thank you for that compliment, sweetie.
(Ayame massages Inuyasha’s pecs and broad shoulders, and they kiss each other.)
Inuyasha: So, babe, do you wanna show our viewers what super Yokai muscle power looks like?
Ayame: Of course, stud.
(Inuyasha and Ayame signal the viewers to come forward. They raise their mighty arms and flex their biceps, with Inuyasha’s biceps bulging like huge mountains and Ayame’s biceps being built and shredded. They even unleash a mighty roar that rivals any tiger, lion, and leopard in the jungle.)
Inuyasha and Ayame: ROOOOOAAAAAAR!!!!
(As Inuyasha flexes his bulging biceps, his muscular body displays his veins and gleans in the light that shines in the cave. After that, Inuyasha does a side chest, front lat spread, side triceps, most muscular pose, abdominal and thighs, and back to front double biceps.)
Inuyasha: Grrrrrr…..Oooooh…..Hahahaha…..Big muscles make a real man, and I’m a big, strong dog Yokai warrior man. No little wusses allowed.
(Ayame continues to flex her biceps. As she still flexes his right bicep, her left hand touches it to show that she is just as powerful as her husband. After that, she does a front lat spread and then a rear lat spread. She returns to the front double biceps pose.)
Ayame: Grrrrr…..Oooooh…..Hahahaha…..Men are not the only ones with big muscles. Women have them too, and I’m a strong, tough wolf Yokai warrior woman. Traitors and cowards are not allowed in our house.
Inuyasha: And you better not underestimate my wife because she is just as strong, and I’m gonna mash you if you do so.
Ayame: And if you think you can get away with messing with my husband, you might just have it coming at you. Just remember.
Inuyasha: Really big, bulging muscles!
Ayame: Lean, well-built muscles!
Inuyasha: Inuyasha crush you!
Ayame: Ayame smash you!
Inuyasha and Ayame: Carnage time! Grrrr…..ROOOOOOAAAAR!!!!
There is nothing more exciting than seeing Inuyasha in his full Yokai form, in his somewhat nude, oiled, and muscular glory and his wife Ayame also in her full Yokai form and more bulging muscles flaunt their mighty strength and make their enemies head for the hills. If you are not intimidated by this mighty couple’s powerful muscles, I don’t know what will.
I hope you all enjoyed this, and I will see you in the next InuAya month submission. Take care, stay safe, and please keep on showing your love for Inuyasha and Ayame as a powerful, mighty, and beautiful couple, everybody.
Inuyasha and Ayame from Inuyasha belong to Rumiko Takahashi and Sunrise. 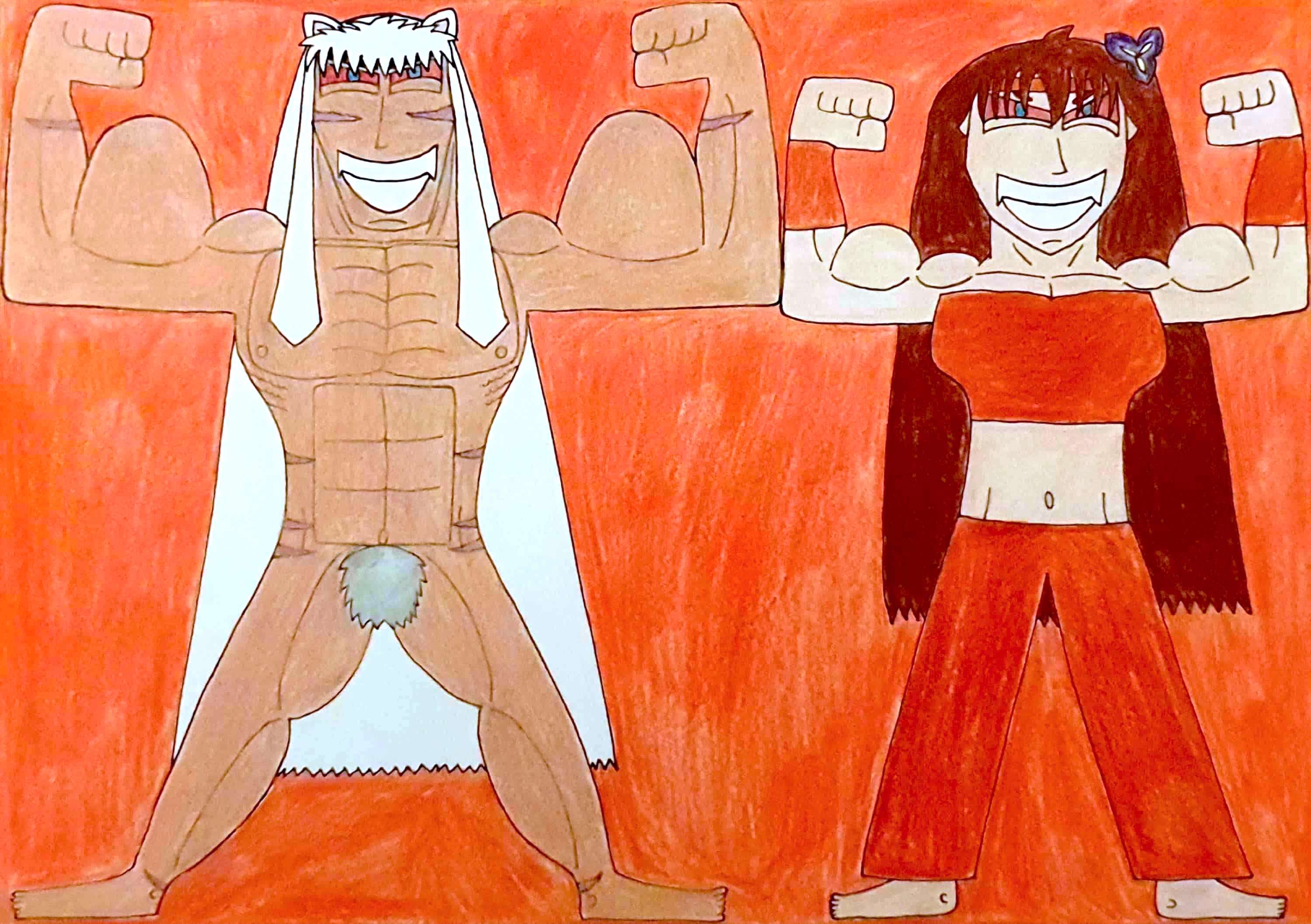