This piece of Inuyasha x Ayame or InuAya fan art, which is my eighteenth submission for my 30 Days of InuAya month, is dedicated to RurouniGemini83, CaptainEdwardTeague, Midori-D, and deedee2014 who are celebrating their birthdays today. So, I wish you a lot of love, joy, prosperity, beauty, fortitude, grace, and abundance on your very special days and in your lives as artists and as people. This is also dedicated to all of the wonderful InuAya shippers of the world. Sit back, relax, and marvel in Inuyasha’s and Ayame’s more tribal side when they go into battle complete with all of that red warpaint.

Marauders, poachers, invaders, and conquerers better beware when 39 going on 40-year-old Inuyasha and his 36 going on 37-year-old wife Ayame unleash their unbridled tribal fury. Inuyasha’s muscular, virile, naked glory perfectly compliments Ayame’s Amazon-like, sleek, fierce power to the point where they would make their enemies drop like flies, especially when it comes to them adorned with red warpaint. The red warpaint they wear is a mixture of red berries, red rose oil, and the blood of various slaughtered demons, which is either put on them by the Northern Yoro Tribe Warriors or by each other. Furthermore, the warpaint design on their faces signifies that they are ready for battle and combat. Inuyasha and Ayame in their feral tribal glory are prepared to crush all of their enemies.

Inuyasha being all naked signifies his oneness with nature and in letting his wild side show. His warpaint designs are in the forms of slash marks, a huge tree, fire on his broad shoulders, lion’s paw prints, lightning, and a tree on his chest to show his strength, formidability, and determination when he takes his enemies down. Furthermore, Inuyasha’s nude, beefy, muscular glory also gives him the utmost privilege of using his whole handsomely muscled body to give all of his enemies some powerful neck-breakers, back-breakers, bearhugs, bodyslams, Boston Crabs, Full Nelsons, and chokeholds. Just ask his most favourite sparring buddy and best big brother of all time Sesshoumaru as well as his most favourite enemies including Menomaru, Jura, and Ryura and they will attest that Inuyasha is truly a powerful warrior, especially since Menomaru’s neck was broken even when he tapped out. Even more amazing is when Inuyasha unleashes a huge and mighty lion’s roar while beating his pecs to show that he is triumphant in his battle. Neither King Grayskull, Conan of Cimmeria, Zula of the Wasai, He-Man, Basuli or Tarzan would dare to conquer Inuyasha because he would just snap each of their necks and roar really loudly at them.

Ayame may be semi-nude, but it does not make her less formidable. Her warpaint designs are in the forms of stripes, circles, dots, the sun, the moon, slash marks, a flying hawk on the top of her chest, and a couple of lightning flashes to show her fierceness, ferocity, and persistence when she challenges all of her enemies. Ayame’s sleek and well-built figure additionally gives her power and strength in her jabs, uppercuts, hooks, crosses, roundhouse kicks, front kicks, and spinning back kicks. Sesshoumaru could proudly state as a witness and frequent sparring partner that Ayame is a truly formidable warrior and holds nothing back. Equally as great is when she unleashes her mighty roar which is a great mix between a lion and a jaguar that could frighten her prey and bring all of her foes to their knees. Warrior men should be careful to never underestimate her, and warrior women should never sell her short for what she can truly accomplish when it comes to kicking butt. Xena and Sheena would be proud of Ayame, while Queen La would love to challenge her and test her strength.

Inuyasha and Ayame in their mighty feral tribal power should never be underestimated. Should anybody try to challenge them, they would end up with broken bones and a whole ton of bruises. Moreover, Inuyasha and Ayame would come out on top of all their challenges.

I hope you all enjoyed this, and I will see you in the next InuAya submission. Take care, stay safe, and please keep showing your love for Inuyasha and Ayame as a powerful, beautiful, and loving couple, everybody. 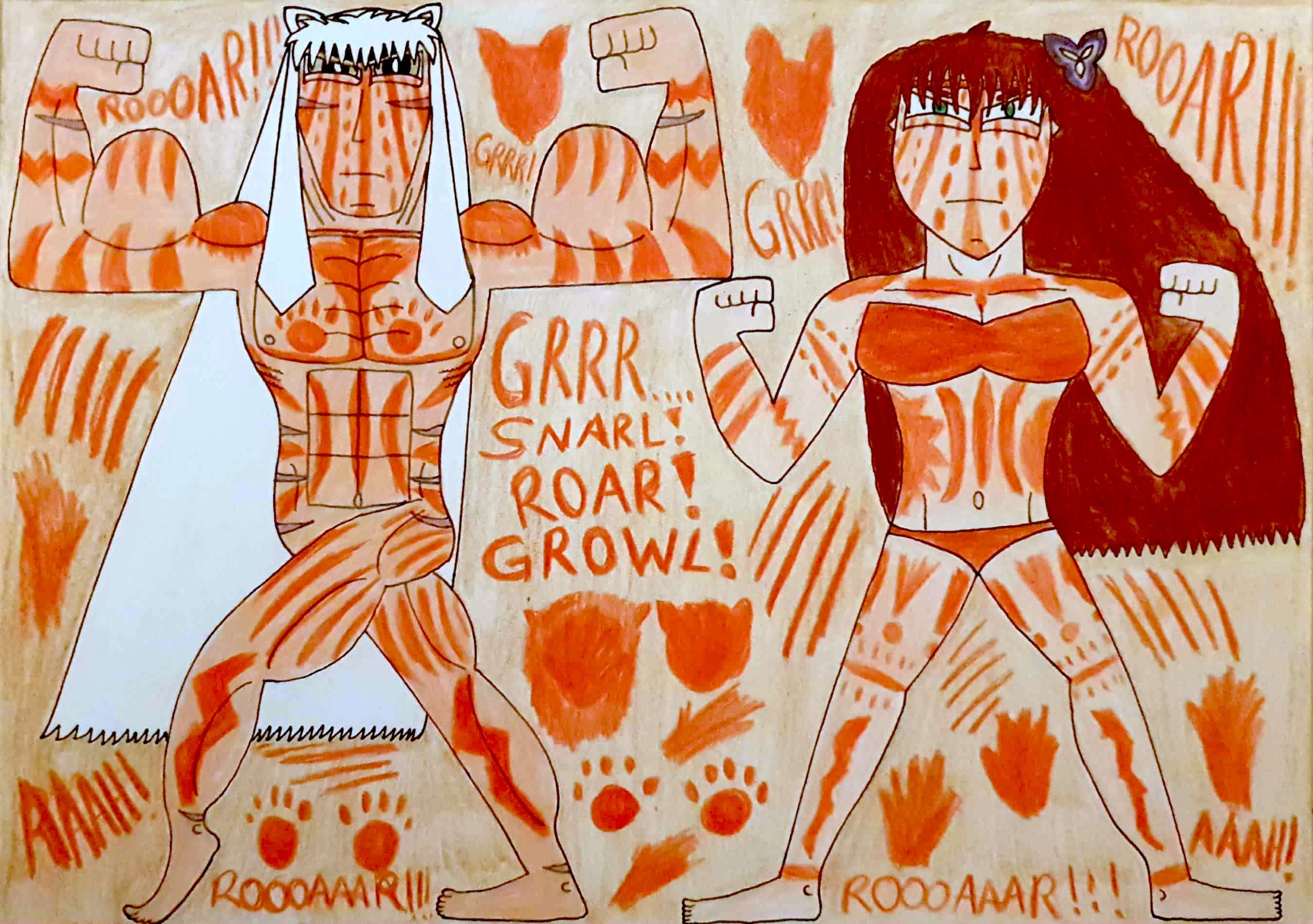