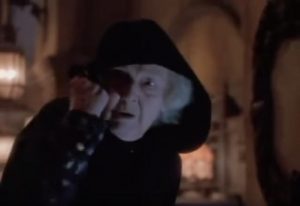 Moviefan12: To close out my look at the villains of the attraction adaptions, I return to the very first movie adapted from a Disney attraction.  It’s a mid 90’s TV movie that aired as part of ABC’s The Wonderful World of Disney.  In many ways, it’s humorous that the first attraction adaption wasn’t based on a classic ride but rather made to promote a new then attraction, the Tower of Terror. 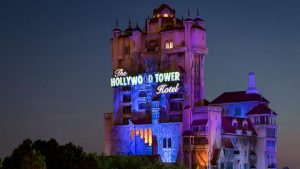 Tower of Terror was built to bring in more thrill rides to Disney and it did work in that regard.  Anyone that knows this ride knows that the original version was inspired by the classic anthology series, The Twilight Zone.  I say original because other versions such as Tokyo’s remove The Twilight Zone from its name and its story. 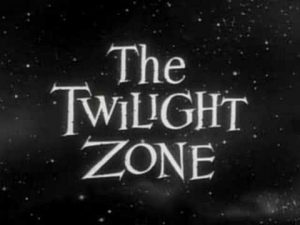 There are two big reasons I highlight that distinction, this movie does not reference the classic TV show, unlike the ride that wants to emulate being in one and Disney’s version has a main character who is corrupt and could be considered a villain in Harrison Hightower. 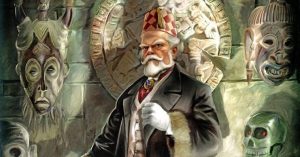 I doubt we will see him in the upcoming big-screen adaption.  Now, something I will give this movie credit for is that it does use the ghosts from the ride as the main characters. 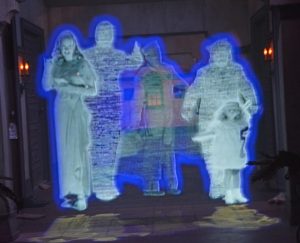 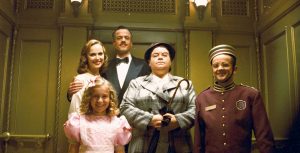 Looking at this adaption is quite different for a few reasons, it being the first theme park adaption and a tv movie.  Oh, and I have never been on this ride.  Every single time, I think about going on this ride, I chicken out.  When I went to the park last October, I almost went on it with my big sister but the drop just scares me out of it every time.  I know the story and the history of the ride but I enjoy it from afar.

This is partially why I have brought in a friend and a frequent collab partner.  He last looked at Muppets Haunted Mansion with me last Halloween and now he returns to look at the villain of this movie with me. Please welcome back, The Creature.

Creature: I’ve never been on the Tower of Terror either. While the original Twilight Zone is easily my all-time favorite TV show and I have been aware of this ride ever since it opened up on the West Coast, I just never got around to it (which is probably because I never go to California Adventure). Of course with it being closed over here, I’d have to eventually migrate to Orlando if I want to go on it at all (I did go on the Guardians of the Galaxy ride that replaced it though…which honestly isn’t very good).

Creature: Regardless of that though, I was also aware of this movie’s existence around the time when the Haunted Mansion movie came out. Considering sites like YouTube weren’t around at the time, seeing it was tricky. I originally only caught bits and pieces on TV and it wasn’t until recently I got to watch it in full. 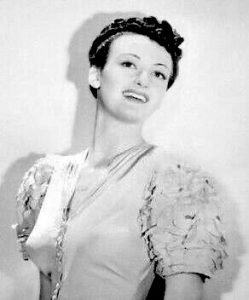 Moviefan12: Clearly, this is a picture of our actress at a much younger age from 1938 as this movie was released in 1997.  Her radio, film, and television credits are rather vast to list including appearing in two of my favorite sitcoms, The Golden Girls and Full House.  However, there is a more important connection between this movie and her past roles.  She appeared in The Monsters are Due on Maple Street from the original run of The Twilight Zone. 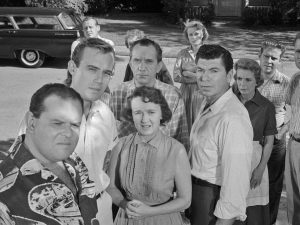 I wonder if this casting was intentional but even if it wasn’t, that is a neat touch and speaks to how the movie ties back into the show that inspired the ride even if the show is never mentioned by name.

The Creature: That’s actually a pretty cool coincidence that she was on the original Twilight Zone regardless of the fact it’s not based on the show. I was unaware of that until you mentioned it.

Moviefan12: I feel it’s best to break down first into the past and the present.  Starting with the latter,  we first meet Abigail when she shows up at the main character Buzzy’s place where she claims that the character of Miss Partridge cast a spell that trapped the ghosts we come to know in the hotel and she needs Buzzy’s help to reverse the curse as it were. 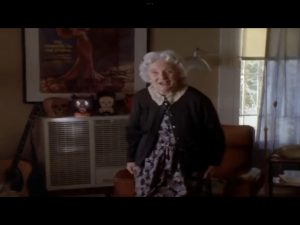 We are then treated to a flashback of her as a child witnessing this lady practice black magic to doom poor Sally. 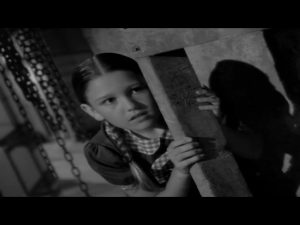 The thing of it is though as we will come to learn,  everything she said is a lie.  A lie born out of hatred and one she had been living for nearly 60 years at the time of the movie.  By the time, she meets Buzzy, she has perfected this lie so it’s easy to believe her. And adding to that is how she presents as a feeble old woman that is heartbroken over the loss of her sister, it’s not hard to see how people can buy into her lie.

The Creature: She definitely had the advantage of playing up the “poor old woman who lost her sister” act in order to trick Buzzy. Considering how innocent she acts and how people can perceive the elderly, it becomes pretty easy for someone to believe her…despite the fact her tale consists of a witch placing a curse on the hotel guests.

Moviefan12: Abby is driven by hatred and jealousy towards her younger sister.  This is what led her to cast the spell. She truly hated her sister and all the adoration that she was getting.  This comes from two elements, her sister was a child star in the vein of Shirley Temple and she felt her parents neglected her.  She goes so far as even tearing the head off a doll modeled after her sister.

Abigail’s hatred and jealousy tainted her worldview when in reality her sister had nothing but love for her.  And this is something she had been living with nearly all her life.  Consider she was a young girl when she cast the spell to get her revenge on her little sister.   That hatred and jealousy had still been strewing inside her for all those years.

The Creature: Personality: Driven by jealousy and hatred of her sister to the point of getting her out of the way…sounds just like Luna from Friendship is Magic.

Unfortunately, sibling rivalry can get pretty heated to the point one may take some extreme measures. Sadly, Abigail was one such example to end up cursing her sister over jealousy of her fame and supposed neglect.

Moviefan12:  I’m combing Desire and Most Evil Deed as they are very much the same for Abby. In many ways, Abby succeeded in what she wanted to do.  She wanted to rid herself of her little sister by trapping her in Hell and while she didn’t get that far, she ended up trapping Sally and four other guests inside the Hotel for years.

She succeeded at what she wanted but it only drove her even madder than before. 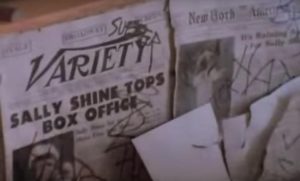 The Creature It’s a bit surprising to see that she’s probably one of the few villains in a Disney property that I can think of who successfully pulled off what she set out to do (for the most part). Plus, it’s no surprise that her hatred of her sister pretty much consumed all her thoughts and desires to the point that she probably wouldn’t have cared if she knew the party was for her.

Moviefan12: Demise isn’t quite the right word as I feel fate is more apt. When Abigail finally comes into contact with her sister, Sally forgives her for everything she did and that helps in part to break the curse.  And in doing so,  Abigail is reunited with her family at the same age she was when she first cast the spell. 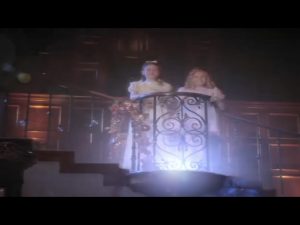 I remember when I first reviewed this movie back on the old TGWTG blogs, I felt this ending was unearned considering what Abby had done.  What she did was quite bad but I think the movie is trying to present the message that it is not too late to be forgiven.  With Sally forgiving her sister and Abby joining her sister where the events left off sixty years ago, I take this in two ways.  The first is Abby is being given a second chance with her sister in the afterlife as that is something she needed.  Moreover, I think the bigger takeaway is that Abigail has finally overcome years of unresolved issues after Sally forgives her.

She even states that she loved Sally but hated the attention she got and hated sharing her with the world.  Hearing that puts Abigail in even more of a tragic light and while what she did was wrong, it’s not hard to think she needs that second chance to start anew with her sister.

The Creature: Her sister forgiving her and the two of them being reunited is something I did expect to see for the end of the movie. With that being said, the lesson of not being too late to be forgiven is definitely what the movie was going for as she started showing some regret when she saw her in the hotel all those years later. That being said, it does feel like she probably deserved the second. Although, the two of them going back to 1939 after the events of the movie would probably raise some questions about the time-space continuum…but that would probably be pointless nitpicking.

Is Abigail Gregory A Good Villain?

Moviefan12: I find myself in a rather interesting area here as I think she’s serviceable for the story and quite good but she’s not memorable either.  It’s not that she’s bad but there is nothing about her that makes her stand out. There have been worse villains I have looked at during this event than her but I don’t see her cracking a list of favorite Disney villains anytime soon either.

The Creature I have to agree that she’s not too memorable. She definitely served her purpose for the story and was acting out of spite and was soon forgiven at the end of it. Unfortunately, there’s not too much to remember her by so she’s not going to be on any big villain lists in the future. 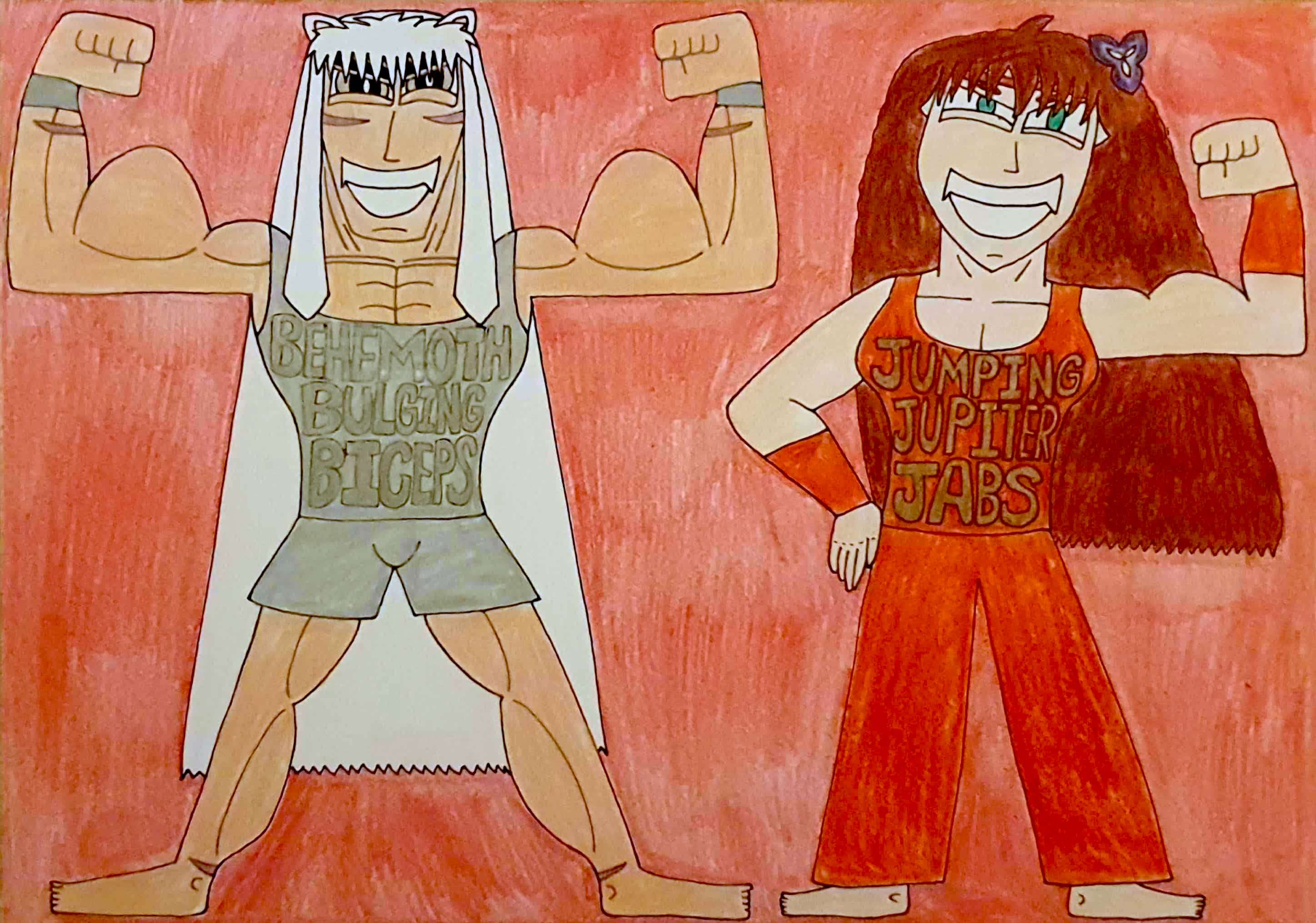