This piece of Inuyasha x Ayame or InuAya fan art, which is my thirteenth submission for my 30 Days of InuAya month, is dedicated to egalvan555 and YuiHarunaShinozaki who celebrated their birthdays yesterday. So, I hope you had magnificent birthdays, and I wish you a lot of love, joy, and prosperity in your lives as artists and as people. This is also dedicated to all of the wonderful InuAya shippers of the world. Sit back, relax, and marvel at the magnificent power found in Inuyasha’s mighty muscles and Ayame’s incomparable combat prowess, especially when it comes to them being such as a formidable power couple.

(Inuyasha is flexing and glancing at his left and right biceps. He proceeds to do a front lat spread, a side chest, and an abdominal and thighs pose. He puts his mighty arms down before signalling you, the viewer, to check him out. He raises his mighty arms and does a front double biceps pose while snarling.)

(From the front double biceps pose, he then does the most muscular pose.)

Inuyasha: Grrrr….You talking about trying to outmuscle me, taking me down, and wanting a piece of me? Well, buddy, I got the whole thing because I’m always up for a challenge and always ready to crush some skulls, break some backs, and snap some necks.

(From the most muscular pose, he stands erect and cracks his knuckles.)

Inuyasha: But I ain’t alone in this. I got my beautiful wife Ayame by my side to whoop some ass. That right, babe?

Ayame: Sure thing, honeybun. (Ayame then focuses her view on the audience at home.) And as for you, I hope you are up for a challenge.

(Ayame, armed with her kickboxing gloves, rolls her head in a slow, circular motion, rolls her shoulders, stretches her arms, and stretches her legs. As she stands erect, she prepares herself in a kickboxing stance, does a series of uppercuts, hooks, jabs, roundhouse kicks, side kicks, spinning back kicks, and front kicks.)

Ayame: Ha! (does a jab) Hiya! (throws an uppercut) Yah! (delivers a roundhouse kick) You enjoy that? Hyah! (throws a hook) You marvel at the sight of my fists?

(She lands more uppercuts, jabs, hooks, and a mighty spinning back kick, all while shouting various Kiai.)

Ayame: You thinking about bringing me down, trying it on with me, and tackling me with all that you’ve got? That’s what I’m here for because I’m going to make sure that I have enough blows to deliver just to shatter some skulls and bring my foes to their knees, and I am never going to hold back in doing so.

Inuyasha: You talking about power? We got your power, bud. We got it in the ring, the arena, the dojo, the gym, the Northern Yoro Tribe, the Western Lands, and, most of all, our family. This is where our power sits. That’s why we’re the strongest warrior couple in all of Japan. You got it?!

Ayame: You bring your finest warriors, your scariest demons, your most powerful monsters, and your deadliest marauders and we’ll show you what a smackdown is. Anybody who dares hurt our family, our friends, and our fellow tribespeople, you don’t do this! You don’t harm the people we hold dearly to our hearts. They have a lot of integrity, love, and honour to give!

Inuyasha: You wanna thrash ’em like that? Hell, no! Not in our tribe, not while we’re here!

Ayame: But if you ever change your mind…

Inuyasha and Ayame: You know where to find us, buddy.

39 going 40-year-old Inuyasha and 36 going on 37-year-old Ayame are no stranger when it comes to power and strength. Inuyasha may combine his skills in Pankration, Ancient Greek Wrestling, and Ancient Greek Boxing with Ayame doing the same with her skills in Kickboxing, Judo, and Nippon Kempo, but their combat skills and strength is not meant for show but for good old-fashioned protection. By the way, do not think for one millisecond that Inuyasha is weak without his Pankration gloves, let alone his Ancient Greek boxing gloves, just because his darling wife Ayame is armed with her kickboxing gloves, for he can still dish out pain and punishment with his bare fists, magnificent muscles, and killer grapples. If you think you can get away with trying to marauder Inuyasha’s and Ayame’s family, you have another thing coming when they unleash their full power. By the way, I was also inspired by Austin St. John’s epic speech during his match with Benny Jux, as I implemented parts of it to Inuyasha and Ayame. Who better to say something as epic as that than this particular power couple.

I hope you all enjoyed this, and I will see you in the next InuAya submission. Take care, stay safe, and please keep on showing your love for Inuyasha and Ayame as a powerful and loving couple, everybody. 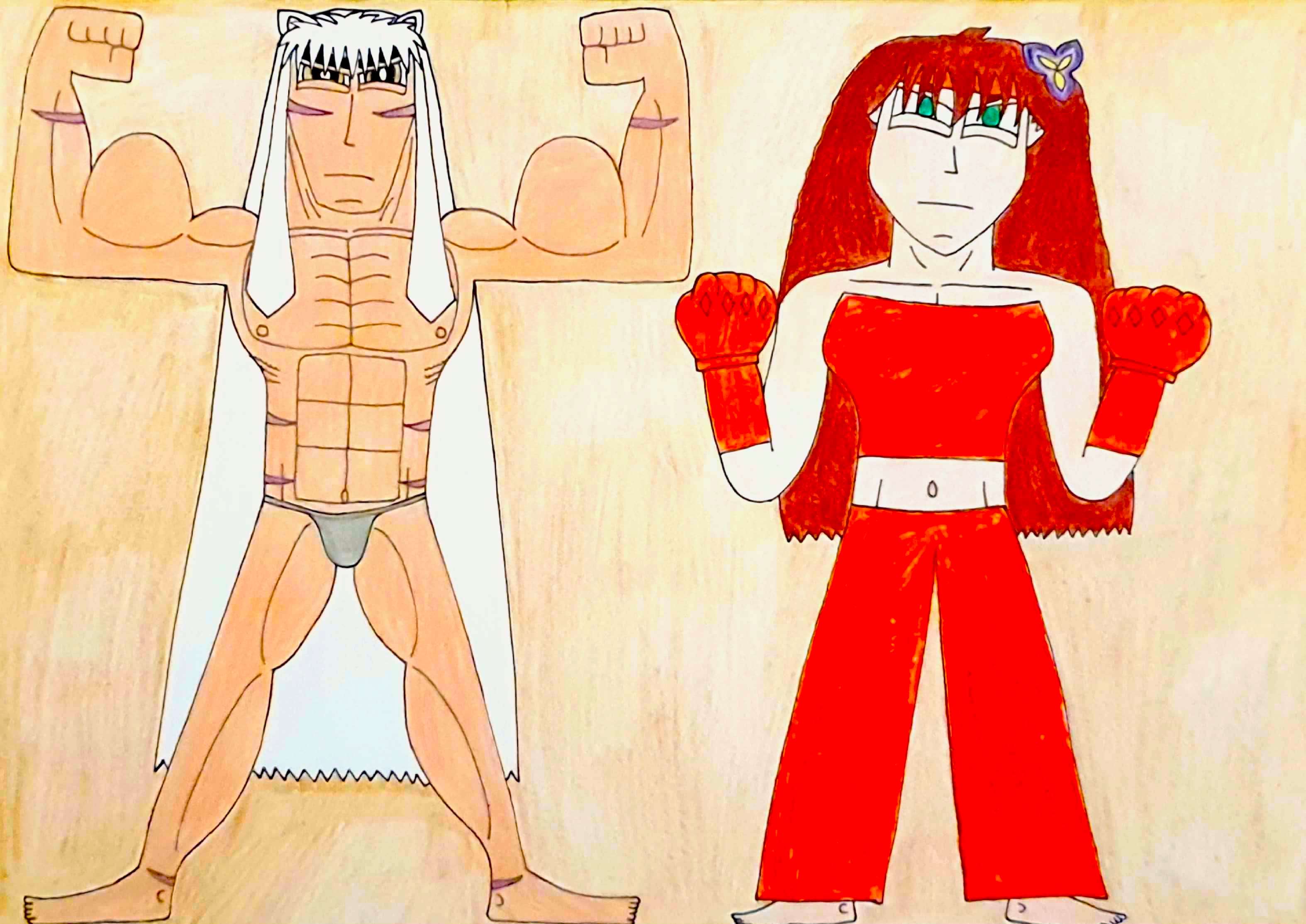