This piece of Inuyasha x Ayame or InuAya fan art, which is my third submission for my annual 30 Days of InuAya, is dedicated to pupleash, ShiyaHawk, Luipunker9, and ladybattousai who are celebrating their birthdays today. So, I wish you a lot of love, joy, and prosperity on your very special days and in your lives as artists and as people. This is also dedicated to all of the wonderful shippers of my precious OTP of all time Inuyasha x Ayame. Sit back, relax, and soak in Inuyasha’s and Ayame’s super strength and potent power as The Northern Yoro Tribe’s mightiest combatants ever.

According to Wolf Yokai law, any leader should talk the talk and walk the walk like a true Alpha Male with an Alpha Female by his side. Luckily for The Northern Yoro Tribe, they have 39 going on 40-year-old Inuyasha and 36 going on 37-year-old Ayame to depend on and root for with all of their hearts, minds, souls, and beings. Time and time again they have proven themselves to be every Wolf Yokai warrior’s champion and will never hold back on the challenges they encounter on a daily basis.

As I mentioned in my previous submission focusing on Inuyasha and Ayame as the King and Queen of the Northern Yoro Tribe, they also go by their respective nicknames of The Silver Lion and The Red Jaguar whenever they compete in combat spectacles. For Inuyasha, it is in Pankration, wrestling, weightlifting, and even bodybuilding, given his beautifully bulging biceps, equally bulging back muscles, terrific triceps, rippling pectorals, and rock-hard abs which all of the Northern Yoro Tribesmen decree that he sets a great physical example to all of them. For Ayame, it is in kickboxing, boxing, judo, and even competing in an athletic beauty pageant which made her win acclaim for her physical strength as well as her inner and outer beauty which make her aspirational to all of the She-Wolf Yokai warriors. If the acclaim Inuyasha and Ayame received was not enough, they also obtained medals for being mighty competitors in their respective crafts and for being the most valuable members of all the Wolf Yokai tribes and received golden wreaths for their dedication and devotion to the tribe. Inuyasha the Silver Lion and Ayame the Red Jaguar are truly aspirational.

Inuyasha is proud to have called himself the Silver Lion because his strength, might, and power as a Pankratiast, a wrestler, a weightlifter, and a bodybuilder can never be questioned. Every clinch, bearhug, punch, kick, chokehold, back-breaker, neck-breaker, camel clutch, Full Nelson, and Boston Crab would all be enough to send every single opponent to a one-way ticket to the next life. Opponents like Menomaru and his kung fu skills, Ryura and his equally impressive Pankration abilities, Jura and his powerful moves as a wrestler, and Kyora and his fierce Wushu capabilities attempted to beat Inuyasha’s great strength, but they ended up paying the price for it with bruised noses, damaged teeth, black eyes, broken necks, and their bodies fatally sore to the point that no hospital could ever help them. Even Kouga and Bankotsu were not immune to the massive blows, clinches, and drops Inuyasha dished out on them, for they also endured bloodied noses and broken ribs. At least their respective wives Sango and Kagome kept them right home where they belong. As for his bulging biceps, pecs of steel, abs of granite, and overall marble-like muscled body, Inuyasha’s intense physical training with all of the Wolf Yokai warriors of the North, South, East, and West did wonders for his body to the point where warriors envied Inuyasha’s muscular body and young wolf boys wanted to be as muscular as he is. He also has a powerful roar that could rival any lion king while also making any lion proud to know that it belonged to a great warrior like Inuyasha. Inuyasha’s super strength and magnificent muscles were even passed down to his most beloved sons Masataka, Masaya, Masaru, Kenta, Keita, Kazuhiko, and Kaito, for they truly admire their dear old dad for being such an inspiration.

Ayame is honoured to have called herself the Red Jaguar because her fierceness, fortitude, and determination as a boxer, a kickboxer, a judoka, and a power model are aspirational to everybody. Every punch, kick, grapple, chokehold, clinch, camel clutch, and stranglehold is strong enough to put her challengers to submission. She has faced many a female opponent such as Princess Kaguya, Princess Abi, and Yura of the Hair who completed underestimated Ayame’s skills as a combatant. The result of their tomfoolery landed them in places they did not want to find themselves in, specifically a spiked gorge, rocks tumbling down on them, and/or drowned in an endless whirlpool. Ayame also faced her fair share of male opponents too. Kyora ended up receiving a huge barrage of Ayame’s kicks and punches when he thought he could use his Wushu abilities to defeat her. Muso attempted to strangle her, but she countered his attacks with one huge swift groin to the family jewels and a a huge judo flip to the ground. Ayame also dislocated Byakuya’s shoulders, for he foolishly used his sarcasm to poke fun at her being a Wolf Yokai. Overlooking her penchant for delivering near fatal blows, she has also grown up to be a beautiful and powerful woman with a strong physique and a whole lot of love to give to the tribe and to her dearest husband Inuyasha. The rigorous training she did with Inuyasha since childhood is proof that they have grown truly strong together, with Inuyasha’s muscles complimenting Ayame’s combat prowess so harmoniously. Every She-Wolf Yokai warrior wants to be as powerful as she is, while the young Wolf Yokai girls wants to be as beautiful as she is when adolescence and adulthood come. Ayame also has a powerful roar resembling a jaguar queen worthy of admiration as well as making any jaguar green with envy at her power. Ayame’s fierce fortitude and determined dedication were also sources of inspiration for her dearest daughters Kiriko, Momoko, Makoto, Mikoto, Maya, Minako, and Meika, as they decree that Ayame is the greatest mother ever and is just as lucky to have Inuyasha as her husband and their dear old father.

Inuyasha the Silver Lion and Ayame the Red Jaguar would not be the super strong power couple they are today without 40 going on 41-year-old Sesshoumaru’s boundless support, great encouragement, and the firm belief that his mighty younger brother and his powerful younger sister-in-law would make something physically, mentally, and spiritually fantastic of themselves. Inuyasha has always seen to it that his sparring sessions with Sesshoumaru are used to the full, especially when it comes to building up each others’ musculature and having wrestling and Pankration matches to challenge each others’ strength. Besides, every bearhug, Boston Crab, and Full Nelson they do to each other only motivates them to push forward with everything they got. Therefore, Inuyasha is so happy to say that Sesshoumaru is the best brother and sparring partner he has ever had, thus making their bromance flourish to such a high degree. Even Ayame is just as happy to have Sesshoumaru in her life as her darling older brother-in-law and her steadfast mentor. Ayame’s sparring sessions and circuit training sessions with Sesshoumaru always saw her in tip-top shape whenever she gets prepared for new challenges. Ayame is just as happy as her darling husband that Sesshoumaru has made their home a lot happier. Contributing to this happy home aside from Sesshoumaru are Shuran, Hakkaku, Ginta, and Shunran who have always shown joy to Inuyasha and Ayame as an amazing power couple.

Inuyasha the Silver Lion and Ayame the Red Jaguar are a super strong power couple who can never be knocked down. Their strength and fortitude are legendary, and their exciting legacy as The Northern Yoro Tribe’s most powerful warrior couple will last for generations to come.

I hope you all enjoyed this, and I will see you in the next submission. Take care, stay safe, and keep on showing your love for Inuyasha and Ayame as an amazing power couple, everybody. 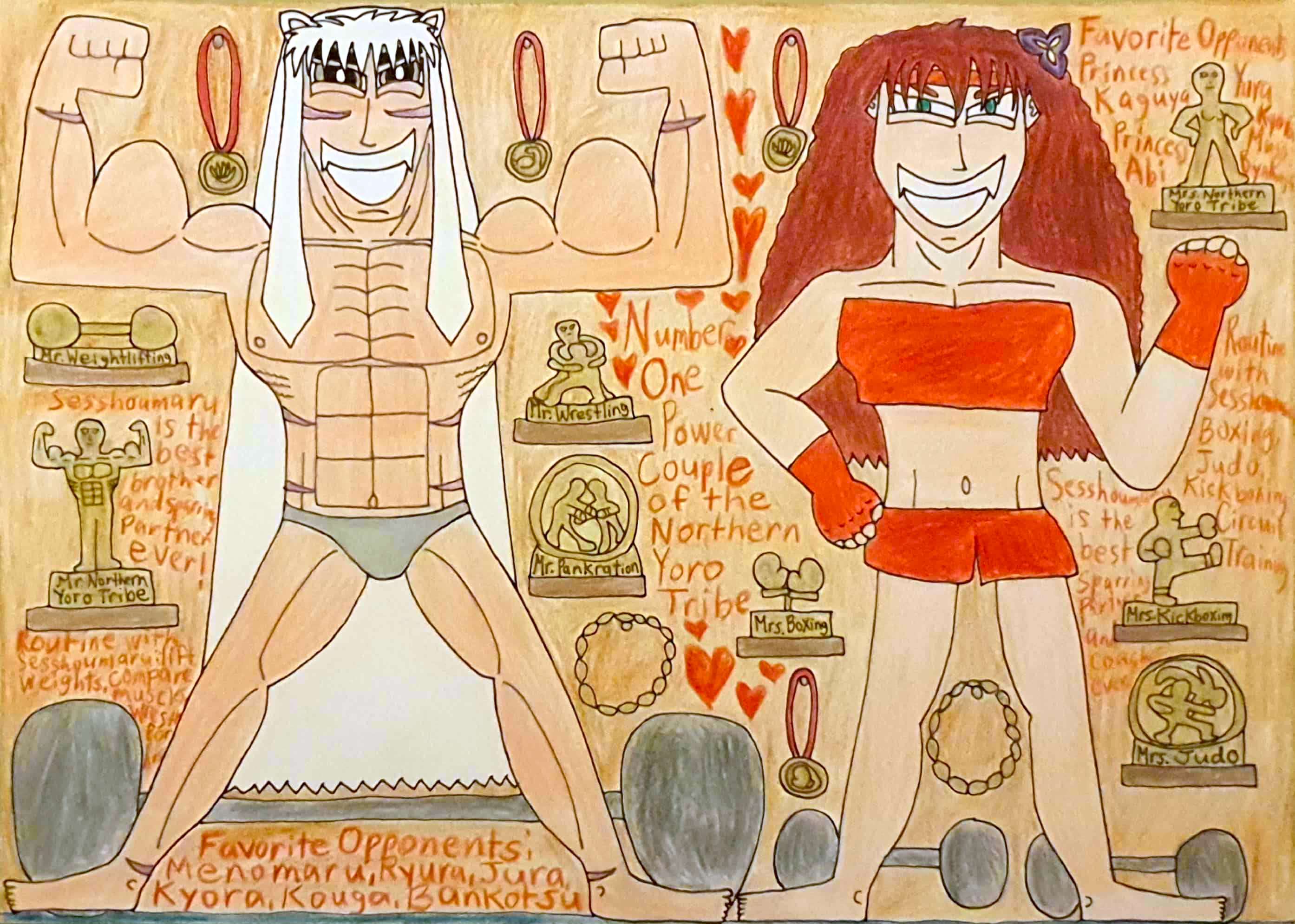