This piece of Inuyasha x Ayame fan art, which is my second submission for my 30 days of InuAya, is dedicated to pokemonlpsfan who is celebrating her birthday today. So, I wish you a lot of love, joy, and prosperity on your very special day and in your life as an artist and as a person. This is also dedicated to the wonderful shippers of my precious OTP of all time Inuyasha x Ayame. Sit back, relax, and revel in the regal power Inuyasha and Ayame have to offer as leaders of The Northern Yoro Tribe.

There is no doubt that 39-year-old Inuyasha and 36-year-old Ayame have been leading The Northern Yoro Tribe with fortitude, solidarity, courage, valour, respect, confidence, and allegiance and are just as faithful to these virtues in their lives as a married couple as well as parents to their children and grandparents to their children’s children. With Inuyasha approaching 40 in eight months time and Ayame approaching 37 in five months time, they show no signs of desisting as their tribes Alpha Male and Alpha Female, even with their firstborn triplet sons and their eldest daughters-in-law also sharing that title. Time and time again, Inuyasha and Ayame prove to felons and vandals who dare besmirch The Northern Yoro Tribe’s good name that their punishment is swift, especially where Inuyasha’s combat skills as a wrestler, Pankratist, and weightlifter and Ayame’s combat skills as a boxer, kickboxer, and judoka come into the mix, thus being a mighty combination of magnificent muscles and marvellous moves. Therefore, Inuyasha and Ayame have been doing exceedingly well in protecting their people, their family, and their home from all perfidious harm.

What we have as the interior is their throne room in their cave. It may not seem like much, but the simplicity of it shows that Inuyasha and Ayame do not revel in overly fancy yet tawdry designs and giving themselves and their family sufficient space to move around. Their thrones are also made of very hard stones built using magma as an adhesive before cooling down, thus showing a sense of power and might. What is also remarkable about their floor is that it is a smooth jade they step on that goes easy on their feet, especially when they have a long and hard day of battle. It is also a nice and comfortable place to entertain guests and allies, especially when they are Inuyasha’s older brothers Sesshoumaru and Shuran as well as his younger brothers Hakkaku and Ginta and Ayame’s younger sister Shunran.

Inuyasha’s attire was a wedding gift that he once received from Ayame’s grandfather The Wolf Elder and his and Ayame’s mentors The Wolf Yokai warriors of the North, South, East, and West if he was successful in obtaining Goraishi. Although he still has his fabric from The Robe of the Fire Rat intact, he ending up making clothes out of it for training and even for his precious Ayame to wear. Inuyasha’s kingly attire is all silver because, according to his surrogate grandfather/grandfather-in-law, it is the colour of perseverance, quick wit, formidability, and loyalty which Inuyasha has in spades. It was also just as useful in keeping Inuyasha safe from all harm as his Robe of the Fire Rat. In fact, whenever Inuyasha competed in wrestling, Pankration, and weightlifting, he would go by his nickname The Silver Lion because, although he is a dog Yokai inducted into the wolf Yokai way of life, he considers the lion’s strength, courage, and leadership aspirational. Even when he worked on his roar as a child, his roar was as loud as any lion in the jungle and/or the savannah. Inuyasha is forever grateful to his grandfather-in-law/surrogate grandfather and his mentors/surrogate fathers for this wonderful gift which he still holds closely to his heart to this day.

As mentioned previously, Ayame’s attire was made from Inuyasha’s Robe of the Fire Rat through, of course, his loving and hardworking hands that made sure that his most beloved wife was going to be kept safe through this garment. While Inuyasha’s Robe of the Fire Rat was specially made for him by his father and two mothers, he also though it would be great if he shared it with somebody that he unconditionally loved. That somebody was none other than Ayame who has always proven herself worthy of Inuyasha’s love through her compassion, courage, perseverance, fortitude, determination, loyalty, and respect. It also helped that they stayed physically and mentally strong for each other in battle, in suffering, and in festive joy. Sure, as a very little child, Ayame used to take Inuyasha’s robe and inquire if it looked good on him, which irritated him in a rather cute way. However, as they came of age, became engaged, and ended up married, Inuyasha realised that Ayame really did look phenomenal in red, rather than her usual white fur clothing with red and black breastplate. Even her grandfather and her parents-in-law attested that red is the colour of passion, tenacity, dedication, and the fire that keeps vessels alive which Ayame has always been defined by. Whenever Ayame competes in kickboxing, boxing, and judo, she would go by her nickname The Red Jaguar because, although she is proud of her wolf Yokai heritage, she identifies herself with the jaguar through its formidability, stamina, and stealth. Even her roar is a combination of a jaguar and lion, but she would still contend that Sesshoumaru’s and Inuyasha’s roars are the loudest. Ayame will always cherish Inuyasha for always thinking of her and for giving her such a beautiful gift that continues to make her smile to this day.

All the warriors of The Northern Yoro Tribe are fortunate to have Inuyasha and Ayame as their king and queen. Their fortitude, courage, and valour together have kept the entire tribe strong and stable for many eons to come. Their progeny are just as fortunate to have such powerful and loving parents as Inuyasha and Ayame. The same thing can be said about their grandchildren.

I hope you all enjoyed this, and I will see you in the next submission. Take care, stay safe, and keep on spreading your love for Inuyasha and Ayame as a couple, everybody. 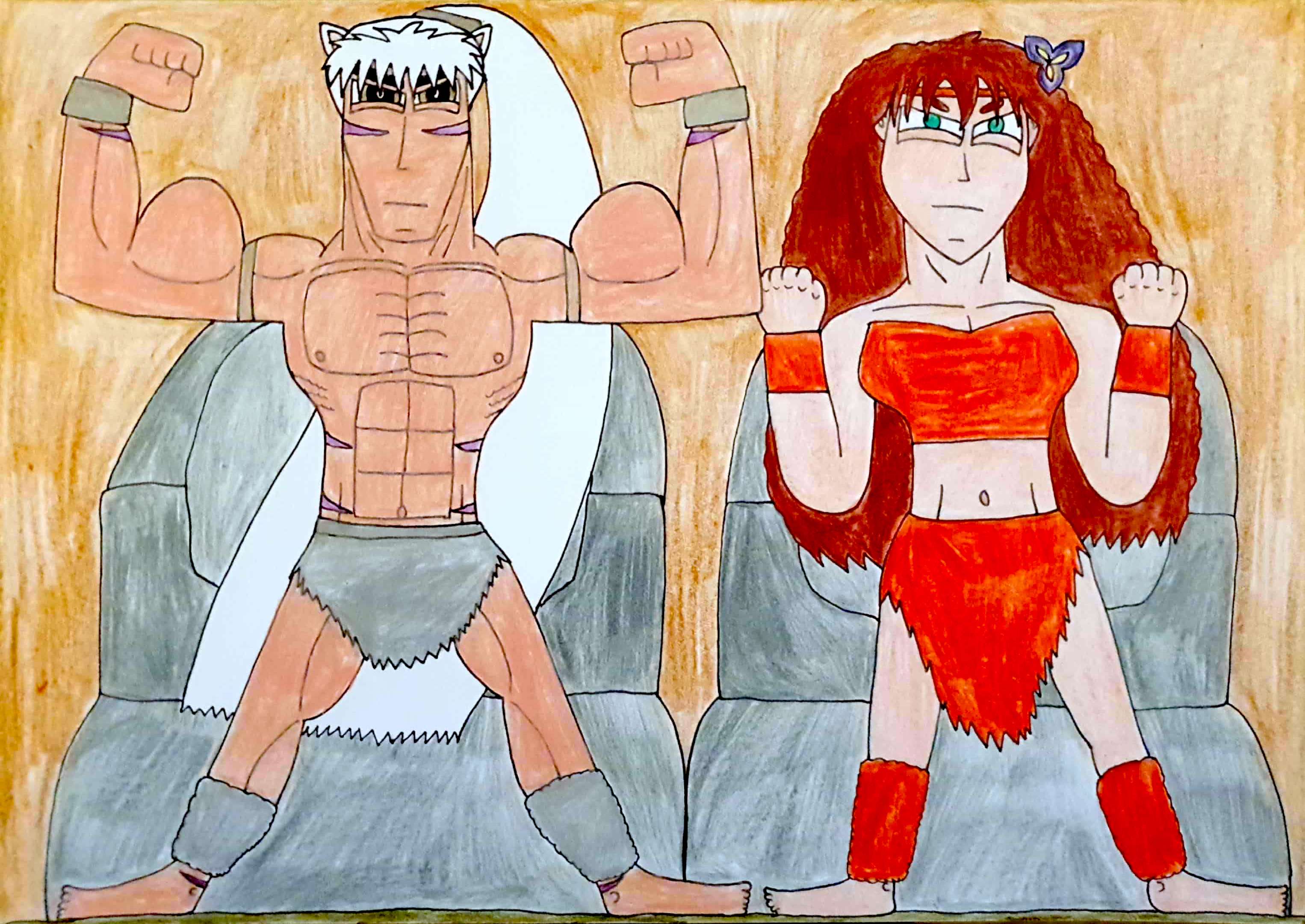