This piece of Inuyasha x Ayame next-gen fan art is dedicated to ThatGrumpyWriter, BananaScholar, and DoujinEevee168 who celebrated their birthdays a couple of days ago. I hope you all had wonderful birthdays, and I wish you a lot of love and joy in all of your endeavours as artists and as people. This is also dedicated to all of the wonderful Inuyasha x Ayame or InuAya shippers of the world who would love to see how their children would look like. Sit back, relax, and sit in for a spell for Inuyasha’s and Ayame’s firstborn triplet sons from left to right Masataka, Masaya, and Masaru.

26 going on 27-year-old triplet sons Masataka, Masaya, and Masaru were born on December 23, which was just nineteen days after their father Inuyasha’s thirteenth birthday and eighteen days after he acquired Goraishi and married their mother Ayame. Although Ayame was only ten years old when her first sons were born, it was clear to see from the day when Inuyasha rescued her as a little child and ended up being raised by her grandfather and her mentors that he was the one who would be her bedrock. Therefore, she always knew that Inuyasha was going to be the strong husband she would love unconditionally and the equally strong father to their potential children. Her wish came true when Masataka, Masaya, and Masaru were born, and they already had single purple stripes on their cheeks, wrists, flanks, and ankles, thus already being full-fledged dog-wolf Yokai hybrids. Their eye colour was also a mixture of their father’s gold and their mother’s green. From that moment on, Inuyasha and Ayame knew that their first sons would grow up to be powerful Yokai warriors as well as great specialists in wrestling and Pankration.

Masataka, Masaya, and Masaru are all champions in wrestling and Pankration and are considered to be three of The Northern Yoro Tribe’s mightiest wrestlers and Pankratists just like their father. Their chokeholds, bearhugs, bodyslams, clinches, jabs, uppercuts, and roundhouse kicks are strong enough to make dents on metallic objects, thus making their opponents shake at the sight of them, yet simultaneously respect them. Growing up, they have been trained by their father in wrestling, Pankration, weightlifting, hunting, and gathering, by their mother also in hunting, gathering, and fishing as well as kickboxing, and by their uncles Sesshoumaru, Shuran, and Hakkaku in jujitsu, sumo wrestling, and Muay Thai respectively. As young boys, they were disciplined, headstrong, and determined warriors who were able to overcome enemies twice to ten times their size. In their teens, their determination to grow as warriors soared exponentially to the point where they continued to build muscle and win contests in wrestling and Pankration. By the time Masataka, Masaya, and Masaru reached 19, they were married to Ginta’s and Shunran’s eldest triplet daughters, 14-year-olds Sakura, Sunako, and Setsuko. Nowadays, as full-grown adult Yokai warrior men, Masataka and Sakura as well as Masaya and Sunako plus Masaru and Setsuko have been married for nearly seven years and have young children of their own.

Masataka, Masaya, and Masaru may look alike as triplet brothers specialising in wrestling and Pankration, but their personalities are quite distinctive. Masataka is the responsible, take-charge, dignified eldest triplet brother who does his very best to set a great example for his brothers and sisters to the point where Inuyasha and Ayame put their boundless trust in him. Whenever somebody does something wrong, he would be the first one to use his blunt honesty to call them out. He can sometimes be bossy, but he really means well to all of his siblings and would never dare abandon them. Masaya is the ambitious, determined, headstrong middle triplet brother who despises the thought of ever giving up and does everything in his power to course every obstacle with a focused mindset. He always does his best to reach higher ground and surrendering is not in his vernacular. Every negativity that comes along his way would be easily confronted. Masaru is the confident, brash, driven youngest triplet brother who is never afraid to speak his mind. He can tell when somebody is lying or fibbing and would be the first one to reprimand anybody who dares tell a single lie. There have been occasions where his over-confidence shows and his mouthiness got him into trouble, despite him supposedly knowing better as one of the eldest children, but he would never dream of hurting anybody, let alone his own family. When Masataka, Masaya, and Masaru put their minds and hearts together as triplet brothers, they not only become a formidable force to be reckoned with in the ring and in the battlefield, but they also prove themselves to be take-charge and confident eldest brothers who set great examples for their younger siblings as well as make their parents proud.

Masataka, Masaya, and Masaru radiate with boundless determination and great ambition not only as champion wrestlers and Pankratists as well as Yokai warriors who are willing to give a barrage of chokeholds and clinches to their enemies, but also as fine gentlemen who do their best to set great examples to themselves and the people they care about. Their discipline and confidence means that they can overcome any and every obstacle.

I hope you all enjoyed this, and I will see you in the next InuAya-related submission. Take care, stay safe, and keep on showing your love for Inuyasha x Ayame or InuAya.

Masataka, Masaya, and Masaru belong to me 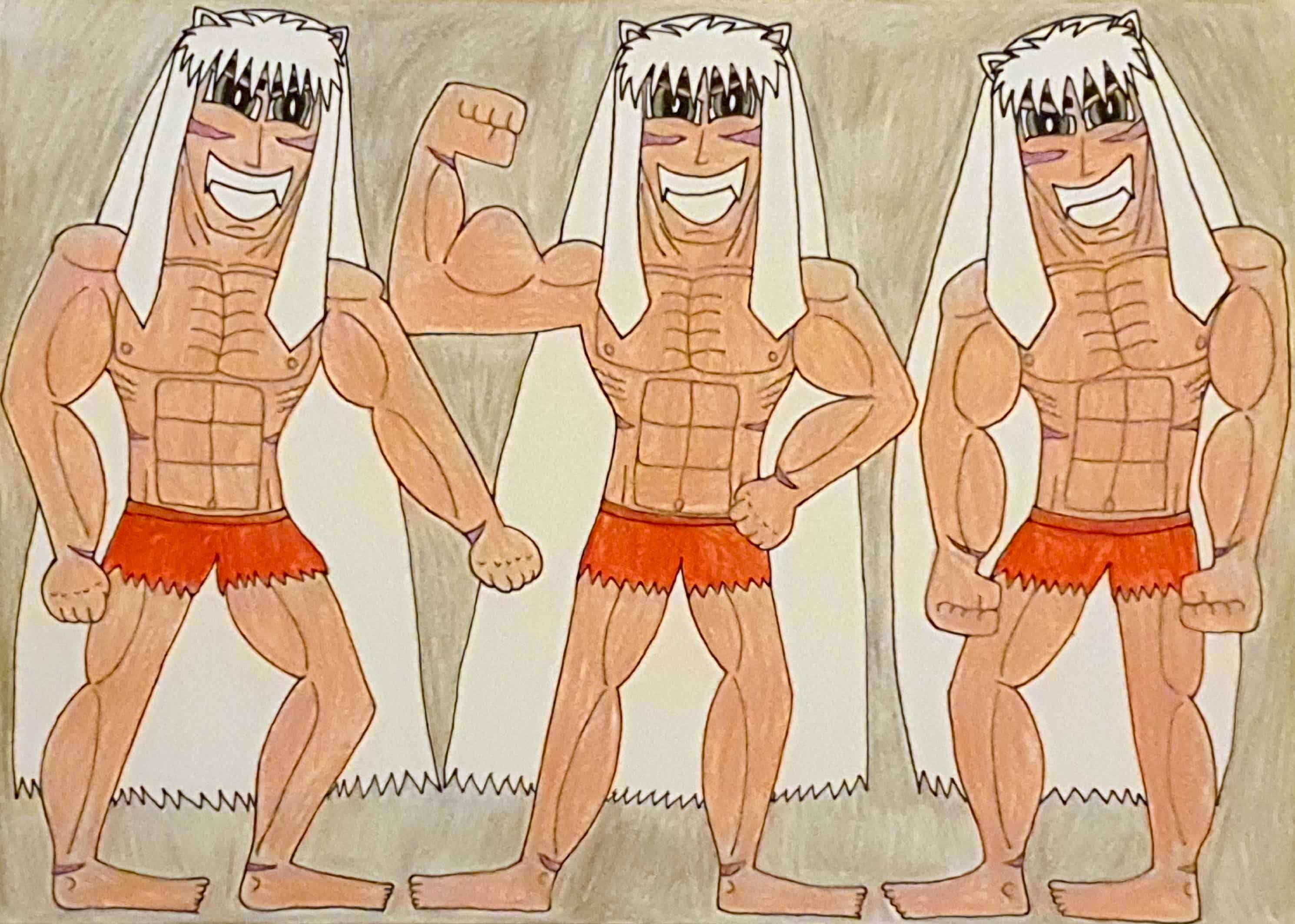