I would also love to dedicate this to all of the people in Ukraine who are going through these continuously tumultuous times. Thoughts and prayers may not always suffice to keep Ukraine safe, but let us do what we can to not let war and division ravage the country let alone the entire world. Working towards peace may not be so easy or clear-cut, but, if we can continue to stand firm with Ukraine in these difficult times, I am certain that we can help her stay safe and secure. So, let us keep staying strong for Ukraine and for her people.

With these trying times among us, I thought that my new original character would bring some sense of solidarity, strength, and inspiration to all the people of Ukraine. Step forward Princess Alexandra Sofiya Mikhailova from Kiev a woman who is full of beauty, wisdom, courage, compassion, humility, dignity, and fortitude as a monarch and as somebody who would never abandon her people. A beacon of light and inspiration, Princess Alexandra always ensures that those who are oppressed by war, famine, and poverty would find refuge, peace, and abundance. She also states that God’s will for her is to always protect her beloved Ukraine as well as the world from the ravages of war which she is so prepared to do so with diplomacy, compassion, truth, and godliness. She would never allow any lies to be uttered by her and only makes it her sole duty to speak and live the truth not only for herself but also for the people.

Princess Alexandra is honoured to be commander-in-chief, given her experience as a nurse, a data analyst, and an artillery expert in the Ukrainian army. She has certainly served the soldiers well, and they are happy that she has opened the doors for more women to partake in serving Ukraine with dignity and fortitude. Aside from her military prowess, Princess Alexandra is, of course, a talented artist, fashion designer, and opera singer. She has always been inspired by Jean-Pierre Ponnelle and Graham Vick when it comes to production designs and was also trained in Italy, England, Germany, and France when it came to developing her dramatic soprano voice that could also sing mezzo-soprano roles, as her repertoire consists of Amneris from Verdi’s Aida, Eboli from Verdi’s Don Carlo, the title role of Puccini’s Turandot, Ortrud from Wagner’s Lohengrin, Venus from Wagner’s Tannhäuser, Brünnhilde from Wagner’s Ring Cycle, Isolde from Wagner’s Tristan und Isolde, the title role of Strauss’s Salomé, the title role of Strauss’s Elektra, and the title role of Bizet’s Carmen. Furthermore, Princess Alexandra even enjoys designing her own dresses and gowns by using good fabric and ethically harvested cotton and silk to make some really gorgeous looking dresses. Her experience in the arts has also made her a staunch benefactor of Ukraine’s artists, and she always ensured that every artist involved in music, fine art, media, and/or liberal arts reach their fullest potential regardless of what their craft is. Princess Alexandra is truly aspirational and a great leader to her people.

Before Princess Alexandra arose to power as princess of Ukraine with her headquarters in Kiev, she came from a simple background with insufficient resources for survival but had parents who loved her unconditionally. From her childhood to her adolescence, she has dabbled in agriculture, politics, and art to the point where her teachers saw a lot of potential in Alexandra to have a great career in politics and art. In order for her to escape a life of poverty, her parents Ilya and Ekaterina made Alexandra live with distant relatives who used to serve as Ukraine as her king and queen by the names of Sergei Vladimir Grigoriev and Valeriya Antonida Mikhailova. Uncle Sergei and Aunt Valeriya waited for this moment for Alexandra to arrive because they revealed to her that she was going to be the next princess of Ukraine. Alexandra was initially unsure of this new development, but she learned that it was her duty to serve her people and that God would always be by her side with every endeavour she had for the country. To reach her full potential as a future monarch, she always saw that education remained top of mind and did what she could to achieve well in her studies from high school to university before serving in the Ukrainian army as a nurse, data analyst, and artillery specialist.

Princess Alexandra assumed office in 2011 and has done a great deal of work for Ukraine. She has invested on Ukraine’s national artists, infrastructure, economy, and education to the point where Ukraine has been faring really well. In recent years, to say that Princess Alexandra was hurt by what has happened to her beloved Ukraine was a mere understatement. She was furious at what Putin’s regime wrought to Ukraine and is now going to do everything in her power to protect Ukraine from returning back to the Soviet Union. Whatever the cost, Princess Alexandra and her people are going to have to be ready for anything to happen.

I was inspired to design Princess Alexandra’s dress after watching how gorgeous Aspasia from Mozart’s Mitridate’s dress looked as designed by both Jean-Pierre Ponnelle in his filmed version from the 1980s with Yvonne Kenny in the role and Graham Vick in the live version from the 1990s with Luba Orgonasova in the role. The idea sprung from my mind when I thought that my new OC would nail the style well and would even serve as a source of inspiration especially in these continuously torrid times. Adding to this is the existence of some Ukrainian royalty ornaments in the design as inspired by Princess Olga of Kyiv as well as adding in Ukraine’s national flower the sunflower on Princess Alexandra’s dress.

In these tumultuous times, Princess Alexandra would be more than ready to protect Ukraine from any further invasion and from further pain. She is not here to see Ukraine suffer. She is here to fight with everything she has got while looking as great and as classy as possible. No obstacle is too big or too small for Princess Alexandra Sofiya Mikhailova of Kiev, Ukraine.

I hope you all enjoyed this and found some inspiration from Princess Alexandra in these difficult times, and I will see you in the next submission. Take care, stay safe, and always stay strong for Ukraine, everybody. 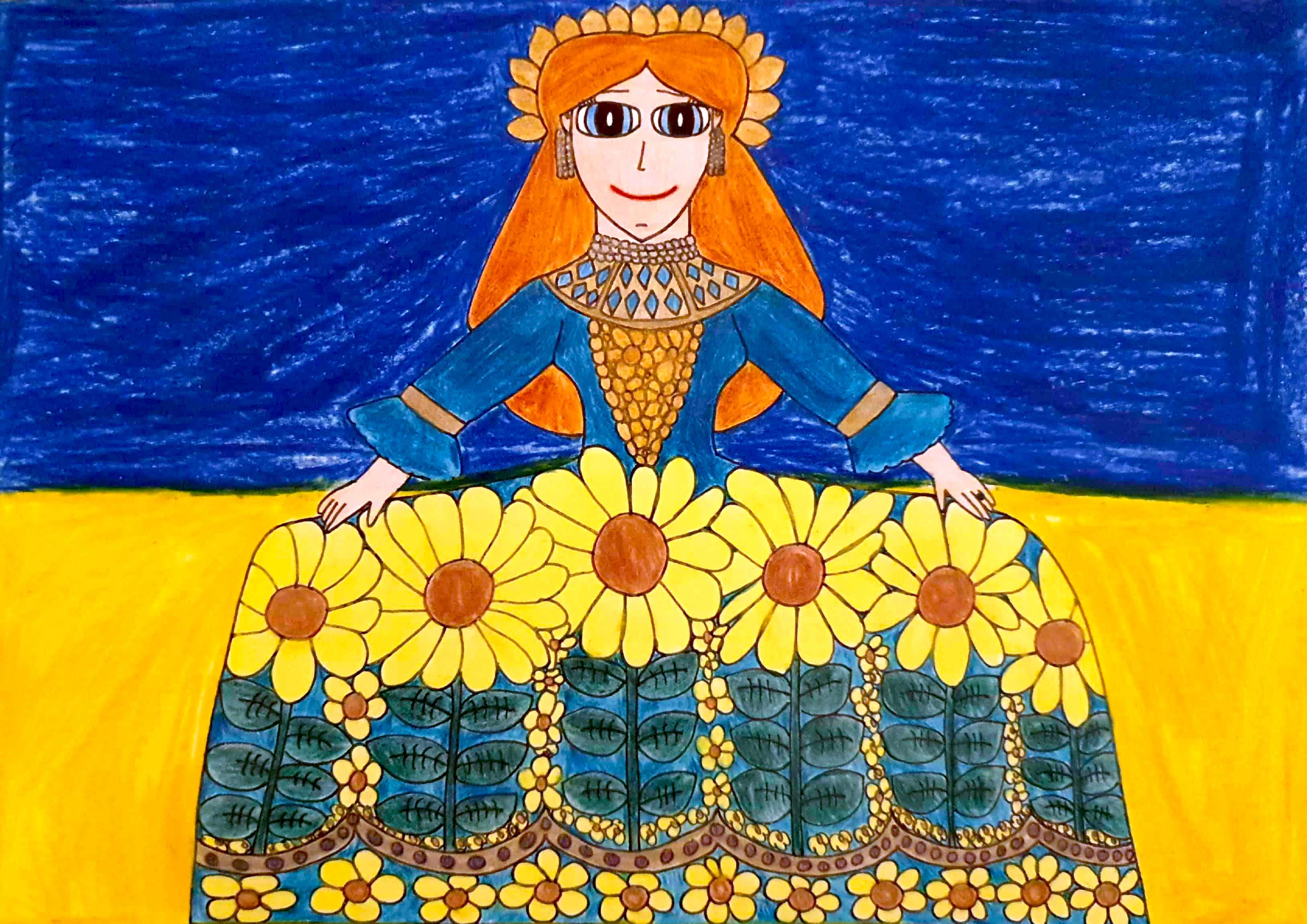