This screenshot demotivational poster is highly Anti-Miroku, Anti-Sango, Anti-Kagome, and Anti-Shippou. Sit back, relax, and revel in the last and final time I am ever going to drag these mountebanks to the mud as a way to expunge the poison that I was hit with when I watched the final moments of Inuyasha Episode 100.

Look. I could ground Miroku, Sango, Kagome, and Shippou if I were their parents. I could put bars on their windows and locks on their doors if I were a policeman. I could even have the classic case of extreme road rage and run over Miroku, Sango, Kagome, and Shippou with my go-kart, except unlike what happened in 1994’s Little Rascals with Alfalfa and Spanky in the race proper where it was an accident of glorious proportions, this would have been done on purpose, especially with their bodies flying to the air and landing to the ground with a harsh and horrible thud. However, the only thing I would ever tell these ingrates, liars, and manipulators is to simply walk away from Inuyasha’s life now and never come back. The rage after watching Episode 100 still stung really deeply, but it is also because I feel so sorry for Miroku, Sango, Kagome, and Shippou for being such narcissists, for being worse puppet masters than Naraku could ever be, thus making them really hypocritical, and for living in their own pathetic little world thinking that it is all according to plan for Inuyasha to encourage them and to rescue them from Garamaru’s nightmare cocoons. There might be other examples where Miroku, Sango, Kagome, and Shippou proved themselves to be quite the ingrates and scumbags, but this is one of those moments that truly solidified how distrustful they can be.

Miroku, Sango, Kagome, and Shippou have proven time and time again that they cannot be trusted as Inuyasha’s “friends” because they have treated him more like a wild card in battle than an actual individual. I understand that Inuyasha is half human and half yokai, but that did not mean that he had to be degraded like this most of the time. The good thing about watching Inuyasha in his perspective and definitely not Kagome’s perspective is that I understand why he is so irritated with Miroku, Sango, Kagome, and Shippou. He always had severe trust issues growing up all alone, traumatised by death, and not having a proper role model to help him be the person he is today. Just as he thought he found trust and friendship in Miroku, Sango, Kagome, and Shippou, it turned out that they just use him because Tessaiga may seem to be used to eliminate a horde of demons and even more powerful enemies, but it is also used for protection. There is a reason why Toga the Dog General made him inherit Tessaiga and Sesshoumaru the Tenseiga, and it is to teach his sons a thing or two about compassion and defending those who are in need. Unfortunately for Inuyasha, it seems like he is stuck protecting fake friends and an abusive life partner just because they are not as physically strong as he is. At least Sesshoumaru’s Tenseiga is put to good use with protecting somebody naturally innocent and sweet as Rin, despite not willing to admit that. My impression on Inuyasha’s so-called friendship with Miroku, Sango, Kagome, and Shippou is that they take advantage of him, chastise him for speaking his mind, and choose to ignore his difficulties because Miroku, Sango, and Shippou think that Kagome is somebody special that they think they should guard with their lives. If ever they did not get what they want, Kagome would use the Beads of Subjugation to physically harm him to submission. I know I made my significant ire against Kagome really loud and clear, but Miroku, Sango, and Shippou are just as complicit in their unwillingness to stop Kagome hurting Inuyasha and choosing to be in the sidelines. Therefore, it goes without saying that Inuyasha deserved far better than these loser ingrates. The little they have done to make Inuyasha’s life better and more at ease with himself was two steps forward and ten-thousand steps backwards, thus having barely any inkling of compassion or understanding of what truly makes him tick and the losses he would have continued to incur if it were not for them or vice-versa.

Every single time I watch Inuyasha be with those fake friends, I always tell myself this is why I am so happy to have made Inuyasha be a full-fledged yokai in my AU headcanon. How he achieved it was not through the Shikon Jewel but through rigorous training with Ayame’s grandfather and all of the warriors from the different wolf yokai tribes ever since he was a very young child. No unnecessary melodrama, no MacGuffins, no insipid love triangles, and most importantly no fake friends. The only place Miroku, Sango, Kagome, and Shippou ought to go is the wracked world of the wretched singing the wretched song because nearly everything about these four wretches as “friends” to Inuyasha is truly, utterly, and upsettingly wretched. If I wanted Inuyasha to have better company and a better life within the Inuyasha universe, I would have made him be raised by The Northern Yoro Tribe headed by Ayame’s grandfather as well as the many wolf yokai warriors from different tribes, be betrothed to Ayame and eventually be married to her too, be much closer to Sesshoumaru as a brother, and be in a stable friendship with Shuran, Hakkaku, Ginta, and Shunran. If I want to go the extra mile of crossover friendships for Inuyasha, I would make him the best of friends with Tommy Oliver and Jason Lee Scott from Mighty Morphin Power Rangers as well as Power Rangers Zeo who would definitely treat him like the younger brother they needed and would have loved to have, Ichise and Ran from Texhnolyze because they could respect each other on a profound level, Kiba and Cheza from Wolf’s Rain because of their deep kindness and compassion, Robin and Raven from Teen Titans 2003 because of their respectful allegiance to him, and Zuko and Katara from Avatar: The Last Airbender because they would help him heal. If he does not mind having more gal pals by his side, I would be totally cool with him hanging out with Startfire and Terra from Teen Titans because they would have so much fun with their super strong big brother from another mother and smother him with so many kisses and hugs to the point where he would be one happy dog yokai warrior. Seriously, any friendship for Inuyasha is so much more beneficial than the “friendship” he has in canon.

I would like to wrap this final tirade up by arguing that Miroku’s, Sango’s, Kagome’s, and Shippou’s “friendship” towards Inuyasha is one of the most bogus things I have ever seen grace the small screen devoid of any warmth and genuineness regardless of what anybody tries to tell. I have seen much better friendships portrayed better in Mighty Morphin Power Rangers, Justice League, X-Men the Animated Series, The Tick, Trigun, X-Men: Evolution, Avengers: Earth’s Mightiest Heroes, Teen Titans 2003, and Avatar: The Last Airbender. I even have a couple of questions for Miroku, Sango, Kagome, and Shippou. When Inuyasha risked his life to save you lot from Garamaru’s cocoons, were you authentically grateful for him coming to your rescue? No. Because he had the strength to pull the stops while you were still in those cocoons, and you knew he was going to rescue you sorry lot and take pity on you too. Did you ever think about the ramifications of his trauma if he dared to lose you? No. Because you could care less if he is still going to make it through. So, Kagome, don’t tell him to sit. And, Miroku, Sango, and Shippou, don’t tell him that he’s a two-timer. Just let Inuyasha go and gain his own autonomy or I’m gonna tie you four parasites up in so much litigation and subpoenas that your children and grandchildren are going to need lawyers!

The only good thing about having Miroku, Sango, Kagome, and Shippou in Inuyasha’s life is that they are examples of what he should never look for in friendship in Miroku’s, Sango’s, and Shippou’s case and, most of all, love and romance in Kagome’s case. I would still be itching to kick Miroku in the groin so profusely, punch Sango in the abdomen multiple times and pin her to the ground, punch Kagome over and over again on the nose and on the cheeks and slam her face on the ground over and over again just so that she could feel the same pain she inflicted upon Inuyasha, and throw Shippou all the icy death glares I could possibly muster. Sure, it might feel darn good for a while because they deserve it, but the only best thing I could do for them is just to get Inuyasha away from those parasites once and for all and just let them stew in their own misery knowing that they lost a friend who is never going to back to them. Those hypocrites and liars buttered their bread and now they have to sleep on it. Furthermore, this is the last time their coldness, falsehood, and phoniness are ever going to faze me. This last bit of poison has been sucked out of my mind, my body, and my soul, and I am never going to back to those parasites, leeches, and viruses ever again.

Well, I am through unleashing my final bit of vitriol towards these really terrible friends. It’s Splendid Seven AU headcanon for me from now on and for the duration of my life as an online content creator who wants to ensure that Sesshoumaru, Inuyasha, Ayame, Shuran, Hakkaku, Ginta, and Shunran live their best possible lives with each other without any stupid soap opera love triangle and without any horribly toxic relationship encroaching their happy home. As for Miroku, Sango, Kagome, and Shippou, I promised that this is the last time I am ever going to bring these fake-os to the chopping block. If you do not like Miroku, Sango, Kagme, and Shippou in sort of the way I do, by all means, take all the potshots on them all you want but please do not make the same mistakes I did. For now, these four liars, manipulators, and phoneys are nothing more than distant memories. 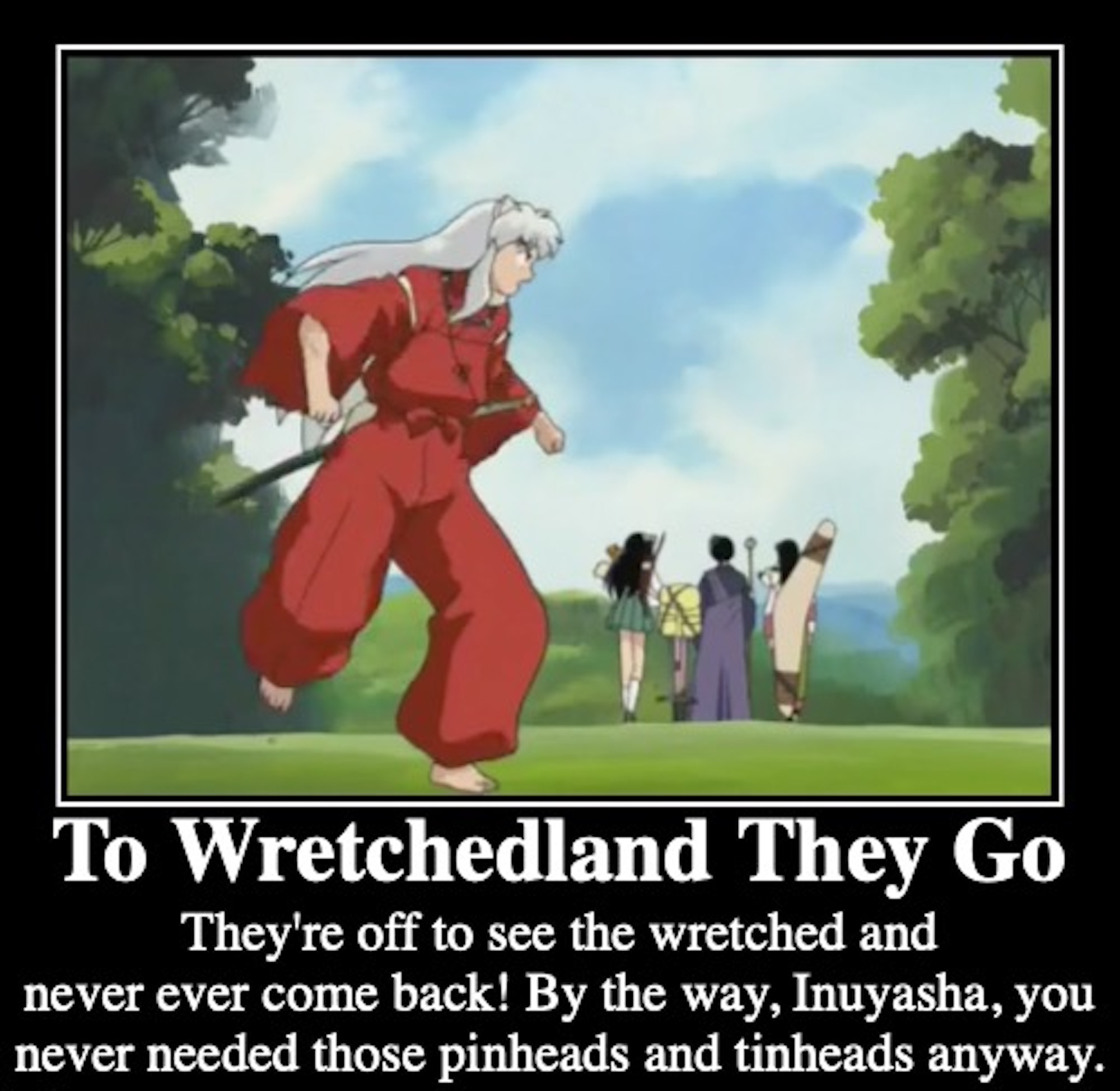