This “What if This Person were equipped with This Item/Weapon/Etc” originally belongs to MagicalKeyPizzaDan and is dedicated to all of my friends, fellow artists, fans, and brethren who find the idea of Inuyasha being the rightful owner of Goraishi fascinating and rather new. Sit back, relax, and find out how Inuyasha’s strength, combat prowess, and determination have helped him acquire the Goraishi even at such a young age.

If you know my Splendid Seven AU headcanon, you would be aware that I made the choice of having Inuyasha develop a close bond with Ayame’s grandfather The Wolf Elder as a means to tie-in the pairing of Inuyasha and Ayame as a mighty couple. I also mentioned that when Inuyasha was a child of 7 and Ayame was a child of 4, he was the one who saved her from The Birds of Paradise and promised to be strong for her. From there, he ended up becoming well integrated into the Northern Yoro Tribe customs that he even became a proud member of the tribe even at such a very young age. Inuyasha’s days of being raised by The Wolf Elder and The Northern Yoro Tribesmen have seen him go from a rambunctious young boy to a courageous adolescent male who has proven time and time again that he was truly Ayame’s intended. Testing how true he is to her, to her grandfather, and to the tribe is the time when Inuyasha reached 13 years old that a challenge awaited him which would prove his courage, willpower, and overall strength as a Northern Yoro Tribe warrior.

In Northern Yoro Tribe customs, the age of thirteen for a male is the age of manhood. This is an age where the comforts of childhood are put behind and the gates to adulthood are open. When Inuyasha reached the age of 13, The Wolf Elder and all of the warriors of the Northern Yoro Tribe celebrated it with a huge feast of wild boar, bear demon meat, deer meat, juniper berries, dark green leafy vegetables, and wild berries. Even 10-year-old Ayame was happy to see that her fiancé finally came of age. After that night of feasting, daybreak came, and it was time for Inuyasha to face his ultimate challenge of manhood, which was acquiring the legendary Goraishi. Many brave warriors attempted to retrieve it, but they were rejected by the Wolf Yokai Graveyard Protector. Ayame was scared for his life, but her grandfather and the warriors assured her that Inuyasha was a strong young man with equally sharp instincts.

Inuyasha arrived at the Wolf Yokai Graveyard. All was silent, until a rumbling sound shook the earth. It was the three-headed Wolf Yokai Graveyard Protector who inquired who this youth was. Inuyasha proudly proclaimed himself as born of a dog yokai general and a human mother but raised by a wolf yokai elder, betrothed to a wolf yokai princess, and is now guardian of the Northern Yoro Tribe. The protector saw in Inuyasha’s eyes that he was not the hanyou child he used to be who was entirely different from his older brother Sesshoumaru. Rather, he was a young canine yokai warrior who was prepared to fight with all of his strength. The protector accepted Inuyasha’s challenge, as it breathed fire. Fortunately for Inuyasha, he was able to dodge that attack with his gazelle-like agility, flying through the air and landing a swift kick on the protector’s right eye from the first head, a claw slash on both eyes of the protector’s second head, and a mighty punch on the left eye of the protector’s third head. He also leapt up to the air to give the protector an earth-shattering bodyslam to the ground, thus jumping on its back hoping to subdue it. However, the protector bounced back up and slashed Inuyasha on his chest, leaving a huge gash. Just as he thought he was a goner, his purple stripes became more jagged and his eyes flashed a bloody red with blue slits. It could only mean one thing. His full yokai side has kicked in. Inuyasha stopped at nothing to subdue the beast with his fists, feet, and super strength by giving the protector a barrage of punches, kicks, and chokeholds until the protector wanted no more, and Inuyasha controlled his feral urge to further tear the protector to shreds. The protector even remarked that Inuyasha was a truly intrepid and strong warrior and that Goraishi was his for the taking. The protector expired, Inuyasha put on the Goraishi, and he proclaimed while raising his hands up in the air, “Hear me, ancestors of all the Wolf Yokai Tribes! I am Inuyasha! The guardian of the Northern Yoro Tribe! Son of Dog General Toga, the Dog Lady, and Princess Izayoi! Brother of Sesshoumaru! The Wolf Elder’s grandson and Ayame’s husband! And I stand today triumphant, for I have obtained Goraishi!” He then ended his grand speech with a powerful and triumphant roar that resounded throughout the graveyard. He returned home with the Goraishi on his hand, as all the warriors and Ayame were cheering him on, although he was still wounded from his battle with The Wolf Yokai Graveyard Protector. Fortunately for Inuyasha, he was under the healing hands of Ayame, the watchful eye of The Wolf Elder, and the Northern Yoro Tribesmen guarded the cave day and night. As Inuyasha recovered, The Wolf Elder declaimed how proud he was of his surrogate grandson and decided to permit Inuyasha to marry Ayame. Fully recovered, Inuyasha finally proclaimed his love for Ayame, to which she shed tears of joy and consented to their marriage. The Goraishi has then formed an integral part in Inuyasha’s rite of passage to manhood, being hailed a hero to the Northern Yoro Tribe, and being the bedrock in The Wolf Elder’s and, especially, Ayame’s lives.

We all know that, in Inuyasha’s canon, the mythical sword known as Tessaiga, which was forged from Toga’s fang, became a part of his identity as a hanyou warrior who protected humans just like Toga the Dog General. Furthermore, Goraishi was originally intended for Kouga, but he was far too dependent on the Shikon Jewel shards on his limbs without implementing his own strength as the Alpha Male he ought to be to defeat Naraku and avenge his fallen comrades personally. This also meant that Goraishi became underused as a powerful heirloom of a weapon. Where Goraishi’s use in my Splendid Seven AU headcanon is concerned, it does maintain its wolf yokai origins, but this is also stepped up to become my AU headcanon’s counterpart to Inuyasha’s Tessaiga and claw attacks from canon. I could see it forming a part of Inuyasha’s identity as a yokai warrior and as an individual, for this accelerates his strength, speed, and stamina. Sure, he is a capable wrestler, kickboxer, boxer, grappler, and weightlifter who has won many a challenge in his young age, but Goraishi would be especially helpful for Inuyasha to defeat more challenging foes and to learn various techniques with it just like his canon experience with Tessaiga. Through the Goraishi, he would break barriers, defeat multiple demons in one fell swoop, extend it to shoot a barrage of shuriken-like crystals, and can integrate various powers into its system, thus proving it to be a truly formidable and versatile weapon in battle. It would take time for Inuyasha to fully master the Goraishi, but he is in good hands with his grandfather-in-law, his surrogate fathers, and his beloved wife Ayame, for they have been championing him during his tenure as the Northern Yoro Tribe guardian. Furthermore, as he masters Goraishi even against Naraku, he would even assume leadership of the Northern Yoro Tribe, with his legacy being a truly exciting one to remember from generation to generation. Even as he is currently a father and grandfather about to approach 40, he is still the prized wielder of Goraishi, a leader who has always kept his people safe from harm, and, most of all, a dutiful grandson-in-law to The Wolf Elder and a fiercely loyal husband to Ayame.

I hope you all enjoyed this idea I have for Inuyasha being the rightful wielder of Goraishi, a weapon I feel should have had so much more utilisation and screen time. Fortunately for Goraishi, it is in exceptionally great hands with a truly formidable warrior such as Inuyasha. Please let me know if you believe this would work out well for both Inuyasha and Goraishi. Take care, stay safe, and may Goraishi’s power not only protect someone as strong as Inuyasha but also all of you.

Inuyasha from Inuyasha belongs to Rumiko Takahashi and Sunrise. 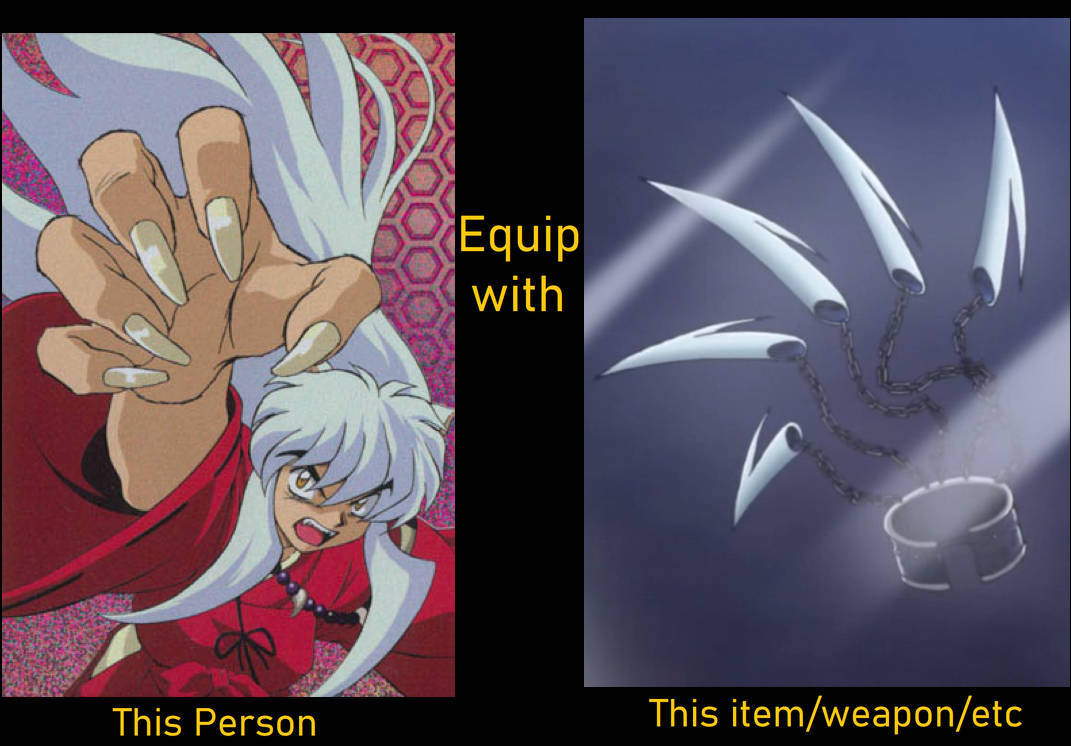 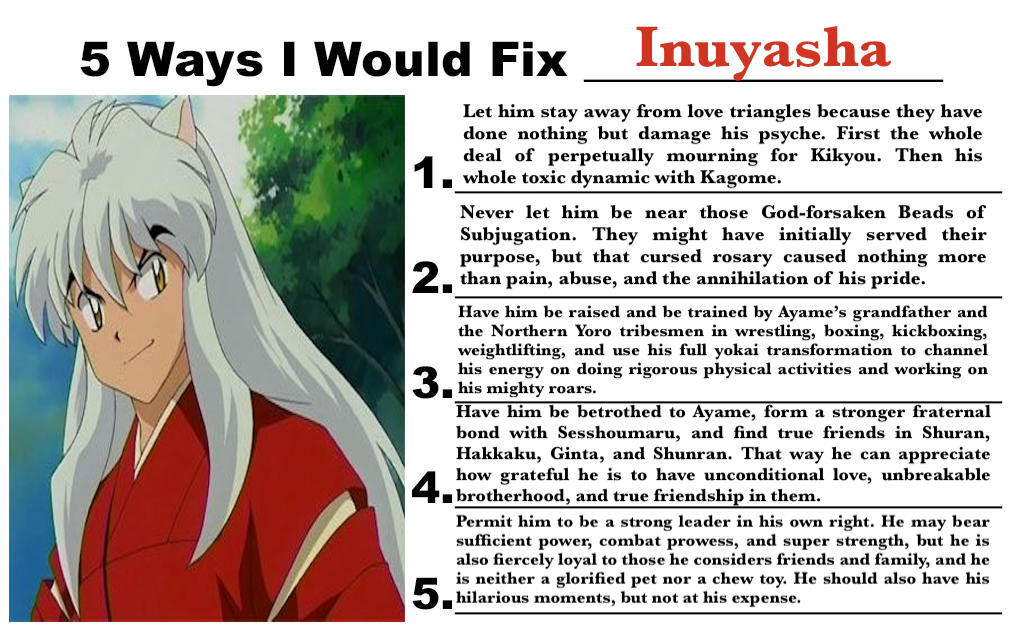