This “What if Worker/Ally were hired by Leader/Boss” meme originally belongs to MagicalKeyPizzaDan :iconMagicalKeyPizzaDan: and is dedicated to all of my friends, fellow artists, fans, and brethren who adore Sesshoumaru, Inuyasha, Ayame, Shuran, Hakkaku, Ginta, Shunran, Ichise, Kiba, Ran, Cheza and anything that has to do with Inuyasha, Texhnolyze, Wolf’s Rain, and Mighty Morphin Power Rangers. Sit back, relax, and revel in the continuation of The Mighty Morphin Inurangers, as Zordon appoints new four new members of the Inuranger family and is quite pleased to see them grow.

Zordon might have appointed five then six teenagers with attitude to become the Power Rangers, but that is almost nothing compared to what he had to contend with in terms of the seven original Inurangers. He thought five to six teens from 15 to 17 years old with attitude was something, try seven teen yokai warriors from 13 to 19 years old with a lot of attitude, power, and might coursing in their systems. However, why stop at just seven Inurangers, when eleven can make things a whole lot more interesting, especially with a focused and strong martial artist, a lone wolf of few words and a lot of action, a taciturn young lady full of spirituality, and a young flower girl joining the Inurangers? As I stated in the earlier post, this recruitment of the additional four Inurangers takes place in 2001, with Sesshoumaru, Shuran, Inuyasha, Hakkaku, and Ginta already in college as well as Ayame and Shunran in high school. Ichise and Kiba are in high school, while Ran and Cheza are in middle school during their debut. This recruitment of Ichise, Kiba, Ran, and Cheza as the new Red, Black, Yellow, and Pink Rangers is an amalgamation of “The Power Transfer Part 2” and “A Different Shade of Pink Part 3”, but without the whole plot of the peace conference in Switzerland and the international gymnastics competition. Instead, Inuyasha, Hakkaku, Ayame, and Shunran receive new and improved ranger suits and identify themselves as the Alpha Red, Black, Yellow, and Pink Rangers, while Ichise, Kiba, Ran, and Cheza inherit Inuyasha’s, Hakkaku’s, Ayame’s, and Shunran’s old ranger suits as the Beta Red, Black, Yellow, and Pink Rangers. Therefore, Inuyasha is still the leader, but he shares that responsibility with Sesshoumaru who is still the White Ranger. Ayame graduates to being the second-in-command in her new tenure as the Alpha Yellow Ranger, Hakkaku ends up as the combat strategist in his new tenure as the Alpha Black Ranger, and Shunran ends up aiding Ginta with technical issues at the Command Centre in her new tenure as the Alpha Pink Ranger. Therefore, Inuyasha, Hakkaku, Ayame, and Shunran share the similar relative fate as Jason, Zack, Trini, and Kimberly in the Boom comics, thus obtaining new powers.

With Ichise, Kiba, Ran, and Cheza being appointed as allies to the Inurangers, Zordon would end up taking this to a whole new level by appointing them as new Inuranger members. Sesshoumaru, Shuran, Inuyasha, Hakkaku, Ginta, Ayame, and Shunran make the arduous journey to retrieve the Sword of Light from an abandoned planet with the help of a map and a ring. It may not have been easy with Lord Zedd and Serpentera complicating matters, but, with the ring inserted at the statue’s finger, the sword is removed, and the ceremony could begin, as Ichise, Kiba, Ran, and Cheza make their entrance in the Command Centre. This is not Inuyasha’s, Hakkaku’s, Ayame’s, and Shunran’s final tenure as the Inurangers, for something greater is going to happen to them. Sesshoumaru raises the sword above his head, as the power transfer commences. Ichise, Kiba, Ran, and Cheza are in the Red, Black, Yellow, and Pink Ranger suits, while Inuyasha, Hakkaku, Ayame, and Shunran are in different Red, Black, Yellow, and Pink Ranger suits. This time, the latter Inurangers’ suits are more lustrous to show that they have grown exponentially in power, in leadership, and in courage. Zordon even instructs Sesshoumaru and Inuyasha to keep leading side-by-side, Ayame to also share the responsibility of leadership alongside Sesshoumaru and Inuyasha, Hakkaku to keep staying strong in battle by helping Shuran out in times of distress, Shunran to help out Ginta with his duties in Command Centre and strengthening its security as best as they can, and Ichise, Kiba, Ran, and Cheza to fight steadfastly as new members of the Inurangers. Zordon even has this to declare to Ichise, Kiba, Ran, and Cheza in their tenure as new members of the Inurangers.

With the ceremony completed, Sesshoumaru, Inuyasha, Ayame, Shuran, Hakkaku, Ginta, Shunran, Ichise, Ran, Kiba, and Cheza place their hands forwards and exclaim “Inurangers!”, thus making even Alpha 5 absolutely ecstatic to have eleven Inurangers on board to protect the earth from all evil. Zordon is just as excited to see how all eleven Inurangers work together as a team as well as a family.

I hope you all enjoyed this, and I will see you in the next submission. Take care, stay safe, and may the power of the Inurangers protect you, everybody. 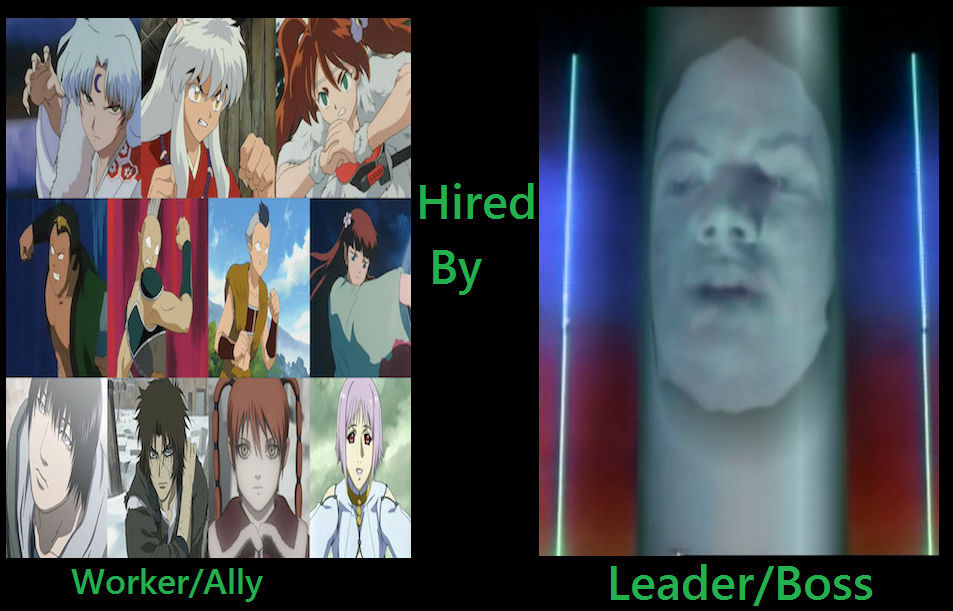