This “What if Hero in That Universe” meme originally belongs to MagicalKeyPizzaDan and is dedicated to all of my friends, fellow artists, fans, and brethren who adore Sesshoumaru, Inuyasha, Ayame, Shuran, Hakkaku, Ginta, Shunran, Ichise, Kiba, Ran, Cheza and anything that has to do with Inuyasha, Texhnolyze, Wolf’s Rain, and Mighty Morphin Power Rangers. Sit back, relax, and revel in the continuation of The Mighty Morphin Inurangers, as four new members enter to not replace any of the original Inurangers but to join them, thus making the Inuranger family grow.

Before I start talking about the four new additions to the main Inurangers cast, I would like to talk about some discrepancies I realised in Mighty Morphin Power Rangers’ first season which I believe could be ironed out in my Inurangers AU headcanon. I am certain all of us growing up with the show enjoyed how much of a lovely couple Tommy and Kimberly were. While I also enjoyed their relationship and rediscovered something sweet and genuine about them together, what happened after “The Green Candle Part 2” left my head scratching in terms of how Tommy’s and Kimberly’s romantic relationship should have been more developed, rather than be left to the wayside in the subsequent episodes before “Doomsday Part 2” where Tommy makes a cameo before officially rejoining full time in “Return of an Old Friend Parts 1 and 2”. At least Season 2 did see Tommy and Kimberly have a lovely moment as boyfriend and girlfriend in “Two for One”. Fortunately in my Inurangers AU headcanon, Inuyasha and Ayame as well as Ginta and Shunran remain as couples through and through and continue to be my main pairings, with Sesshoumaru continuing his duty as shipper on deck for InuAya and Shuran and Hakkaku continuing their duties as shippers on deck for GinShun. Transitioning to Season 2’s “Green No More Parts 1 and 2”, this episode introduced The Dark Rangers consisting of the new school bullies Justin, Tina, Bobby, Kristen, and Zane who were underused as foils to The Power Rangers and were never seen again after they reformed from the school bully ways. Where my Inurangers AU headcanon is concerned, in which Mighty Morphin Inurangers is set one year later in 2001 and sees 20-year-old Sesshoumaru, 19-year-olds Shuran and Inuyasha, and 18-year-olds Hakkaku and Ginta in college and 16-year-old Ayame and 14-year-old Shunran still in high school, 17-year-old Ichise, 16-year-old Kiba, 12-year-old Ran, and 11-year-old Cheza are composite characters of the Dark Rangers’ roles and Rocky, Adam, Aisha then Tanya in Zeo, and Katherine “Kat” respectively and are introduced not as school bullies but as new students willing to make friends with Sesshoumaru, Inuyasha, Ayame, Shuran, Hakkaku, Ginta, and Shunran. Just as a new friendship was about to fully formed between the seven Inurangers and the four new students, the latter four were at first abducted by Lord Zedd to become the Dark Inurangers. However, after Sesshoumaru and Shuran rescued Ichise, Kiba, Ran, and Cheza, they were appointed by Zordon as new members of the Inurangers, thus making the group grow from seven to a whopping eleven.

Speaking of Ichise as Rocky, Kiba as Adam, Ran being a composite character of Aisha and Tanya, and Cheza as Kat, for those of you who tuned in to Seasons 2 to 3 of the original Mighty Morphin Power Rangers, you might have realised that this show’s journey endured some casting changes, especially when Saban’s cheapness came into play for Austin St. John as Jason, Walter Emanuel Jones as Zack, and Thuy Trang as Trini wanting fairer pay and walked out as a protest, and when Amy Jo Johnson as Kimberly planned her exit as a means to not always limit herself with the Power Rangers franchise and do projects that kept challenging her capabilities as an actress, although there was also safety problems that occurred on set. The result was Season 2 and 3 of Mighty Morphin Power Rangers seeing the power transfer occurring between Jason, Zack, and Trini to Rocky, Adam, and Aisha as the new Red, Black, and Yellow Rangers in Season 2’s halfway point and another power transfer occurring between Kimberly to Kat as the new Pink Ranger after being introduced as Rita Repulsa’s underling before fully turning to the side of good. What, pray tell, does this have to do with Ichise, Kiba, Ran, and Cheza in the Inurangers universe? What this means is that Ichise is the new Red Ranger akin to Rocky, Kiba is the new Black Ranger akin to Adam whose actor Johnny Yong Bosch was also Kiba’s English voice actor, Ran is the new Yellow Ranger akin to Aisha, and Cheza is the new Pink Ranger akin to Kat. However, there will be no Peace Conferences in Switzerland as what originally happened to Jason, Zack, and Trini nor will there be any international gymnastics competitions occurring as what originally happened to Kimberly. Instead, Inuyasha the Inurangers’ version of Jason is still the leader and Red Ranger, Ayame the Inurangers’ version of Trini is still the Yellow Ranger, Hakkaku the Inurangers’ version of Zack is still the Black Ranger, and Shunran the Inurangers’ version of Kimberly is still the Pink Ranger. The only difference is that Inuyasha, Ayame, Hakkaku, and Shunran as well as Ichise, Ran, Kiba, and Cheza are designated as Alpha for the former and Beta for the latter. For instance, whenever it is morphing time, Ichise would exclaim “Tyrannosaurus Beta”, while Inuyasha would exclaim “Tyrannosaurus Alpha” before the camera zooms in on his face. Furthermore, Inuyasha, Ayame, Hakkaku, and Shunran acquire newer suits with a slightly darker hue, while Ichise, Ran, Kiba, and Cheza acquire Inuyasha’s, Ayame’s, Hakkaku’s, and Shunran’s old suits, which is my Inurangers counterpart to Jason, Zack, and Trini being the Omega Rangers in the Boom comics.

17-year-old Ichise is the taciturn, determined, focused, and fierce lone wolf who commands the Red Dragon Thunderzord. As the Beta Red Ranger, his combat skills and determination to be constantly challenged are what define him and is always ready for battle. One should never mistake Ichise’s lone wolf nature for sheer isolation because he is a fiercely loyal fighter who shows decorum and respect to everybody he considers his friend and his family. Sure, he had an initial rivalry with Sesshoumaru and Inuyasha because they are the Inurangers’ leaders. However, he has come to respect them and learn so much from the Taisho brothers. Out of the guys, he considers Shuran, Hakkaku, and Ginta to be great friends who always make him smile whenever he has a bad day and considers Kiba to be like a brother due to how similar they are in terms of skill and understanding each other. When it comes to Ayame and Shunran, he is immensely loyal to them and considers them sisters. He also has a nicely budding relationship with Ran and considers Cheza like his little sister. He is also an expert in Brazilian jujitsu, kickboxing, boxing, and Muay Thai and hosts Brazilian jujitsu classes every afternoon. Ichise’s favourite food is roasted mackerel with steamed spinach and miso soup.

16-year-old Kiba is the fearless, persistent, competitive, and unrelenting boy scout who commands the Black Lion Thunderzord. As the Beta Black Mastodon Ranger, his instincts, intelligence, and craftiness aid him in getting out of any problematic situation. A young man of few words, Kiba would never allow any petty remark disrupt him and only fights when necessary as well as when his friends and his family are in danger. He demonstrates reverence and allegiance to Sesshoumaru and Inuyasha, loyalty to Shuran, Hakkaku, and Ginta, allegiance to Ayame and Shunran, brotherhood to Ichise, compassion to Ran, and unconditional love to Cheza to the point where something more is blossoming between him and her. He is also an expert in karate, judo, kendo, and Tae Kwon Do and teaches kendo classes. Kiba’s favourite food is rib eye steak with peppercorn gravy, green beans, and roasted sweet potatoes.

12-year-old Ran is the wise, articulate, calm, and rational intellectual who commands the Yellow Griffin Thunderzord. As the Beta Yellow Sabre Tooth Tiger, Ran combines focus, precision, and cunning to make her a complete strategist in battle. She is also somebody who bears a stern moral code and a strong sense of spirituality, thus taking nothing for granted and showing solidarity to those who need it the most. She looks up to Sesshoumaru, Shuran, Inuyasha, Hakkaku, Ginta, Ayame, and Shunran as if though they were her older siblings, fancies Ichise because of how strong and fierce he is as a fighter, relies on Kiba as her best guy friend, and cares for Cheza as if though she were her younger sister. She is also an expert in yoga and Wushu and teaches Wushu to very young children. Ran’s favourite food is sushi, whether it is with shrimp, salmon, surimi or tuna.

11-year-old Cheza is the kind-hearted, loving, compassionate, and elegant peacekeeper who commands the Pink Firebird Thunderzord. As the Beta Pink Pterodactyl Ranger, Cheza combines grace, style, and accuracy in every single move she makes in battle. One should never mistake her gracefulness and her diminutive size for her weakness, for she can use her agility as a great physical strength to overcome her foes. She admires Sesshoumaru, Shuran, Inuyasha, Hakkaku, Ginta, and Ichise as if though they were her older brothers. She also cherishes Ayame, Shunran, and Ran so much because they have formed such a warm bond as soul sisters. However, the person Cheza admires the most is Kiba because of how valiant, steadfast, and strong he is as a person. She is also an expert in interpretive dance and gymnastics and teaches various dances to very young children. Cheza’s favourite food is Pavlova with strawberries, raspberries, and blueberries.

The Inurangers have definitely gone bigger and better in membership, which makes the group dynamics even more exciting. To say that this is a team is quite the understatement. Compared to Mighty Morphin Power Rangers’ six members, eleven members for the Inurangers feels more like an army. At least this could be an ensemble cast children and children at heart would gladly tune into.

I hope you all enjoyed this, and I will see you in the next submission. Take care, stay safe, and keep on spreading that Inuranger love, everybody. 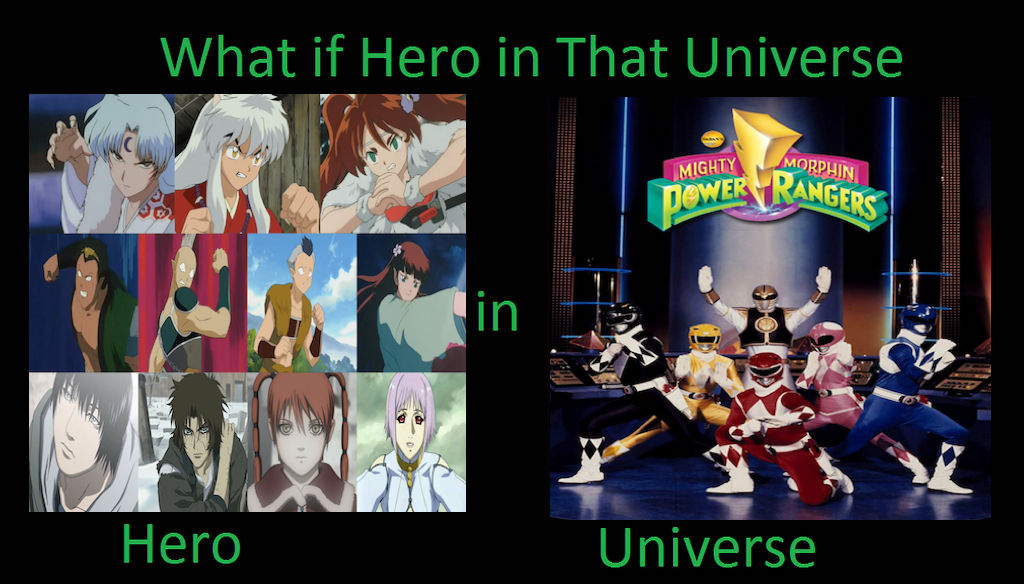