This screenshot motivational poster is highly Pro-Ayame, Pro-Shunran, Pro-Ran, and Pro-Cheza, with some Pro-InuAya, Pro-GinShun, Pro-IchiRan, and Pro-Kiza moments here and there, although this mainly emphasises Ayame’s, Shunran’s, Ran’s, and Cheza’s friendship and sisterhood. Sit back, relax, and revel in how these four soul sisters have grown from charming young girls to courageous and genuine women.

Nothing spells genuine sisterhood than the one Ayame, Shunran, Ran, and Cheza have with each other because they would always be there for each other to the point where anybody can perceive them as sisters. From their childhood years as neighbours having tons of girl time in the backyard as well as in the common room to their adolescence affirming the unconditional love they have for their significant others to their adulthood as women who have grown in compassion, wisdom, and courage, they cannot afford to abandon, let alone betray, the deep bond they have been establishing for years. Ayame, Shunran, Ran, and Cheza would even have a sisterhood that would put The March Sisters; Meg, Jo, Beth, and Amy; from Louisa May Alcott’s Little Women to shame. Ayame bears both Meg’s honour, grace, and poise and Jo’s independence, toughness, and determination as the eldest sister. Shunran possesses both Meg’s ladylike elegance, class, and grace and Jo’s feistiness, rambunctiousness, and persistence as the second sister. Ran embodies Beth’s old soul, intellect, and decorum as the third sister. Cheza incorporates Amy’s innocence, joviality, and lovability in her character as the youngest sister. Shunran may also have older biological sisters of her own in Toran and Karan, and she is just as happy to call them her sisters, but Ayame, Ran, and Cheza never knew what it is like to have siblings in their lives, especially sisters. Regardless, Shunran would always be grateful to call Ayame her big sister for life as well as Ran and Cheza as her loving little sisters, thus establishing that beautiful bond that has kept them together. Nothing is ever going to get Ayame, Shunran, Ran, and Cheza down because they will always rise together against all odds.

Their childhood would see them partaking in an array of creative endeavours and physical activities, with Ayame between the ages of 9 and 12 practicing kung fu and karate, Shunran between the ages of 7 and 10 taking part in gymnastics, Ran between the ages of 5 and 8 collecting dolls, masks, and puppets, and Cheza between the ages of 4 and 7 tending to the flower garden, under their grandparents’ watchful eyes. In fact, the love Ayame, Shunran, Ran, and Cheza have for their grandparents is what has brought them together, and their grandparents consider them to be very precious because seeing their granddaughters grow brings them joy and happiness in knowing they can be something more. Ayame’s skills in Shaolin Kung Fu, karate, and judo would inspire Shunran, Ran, and Cheza to be stronger and be more discipline whenever they are in danger. Shunran’s capabilities as a gymnast and a dancer would help keep their spirits alive through graceful movement. Ran’s fascination in dolls, puppets, and masks would spark curiosity and interest, given how one doll, mask or puppet was different from the other. Cheza’s passion for flowers and plants would make Ayame, Shunran, and Ran appreciate the simpler things in life as well as partake in garden tea parties every weekend. When it came to the relationship they had with boys; specifically Sesshoumaru, Inuyasha, Shuran, Hakkaku, Ginta, Ichise, and Kiba; they were really great friends, with Ayame having a crush on Sesshoumaru because he was cute and cool and having a strong friendship with Inuyasha, Shunran feeling safe under Shuran’s protection and having loads of fun with Hakkaku and Ginta, and both Ran and Cheza feeling safe whenever Ichise and Kiba come to take care of them. Sometimes, Ayame, Shunran, Ran, and Cheza would prove how surprisingly strong they were at such a young age by giving Inuyasha, Ginta, Ichise, and Kiba a judo flip, which impressed them so much even to the point where Ginta was really charmed with Shunran. There were also occasions where Ayame, Shunran, Ran, and Cheza would giggle about Sesshoumaru’s, Shuran’s, Inuyasha’s, Hakkaku’s, Ginta’s, Ichise’s, and Kiba’s fun roughhousing because it was really amusing to see the boys giving dog piles and tackles galore. When it came to the girls’ sisterhood, they would also make a pact to never leave each other and would always comfort each other during the sad times. Since then, the four girls’ sisterhood was never going to be broken.

The adolescent years presented changes for Ayame, Shunran, Ran, and Cheza in their love lives, given that 15-year-old Ayame had been married to 18-year-old Inuyasha for four years now, 13-year-old Shunran had been engaged to 17-year-old Ginta for three years now, 11-year-old Ran was starting to show interest in 16-year-old Ichise, and 10-year-old Cheza was starting to have feelings for Kiba. This would also lead both Ran and Cheza to confide in both Ayame and Shunran about what it was like to have found themselves in loving relationships with Inuyasha and Ginta. Ayame stated that she and Inuyasha had a lot of things in common, understood everything about her, encouraged her to be herself and to never pretend, and that her grandfather always saw potential in Inuyasha to grow as a strong fighter who was going to keep her well in the good times and the bad times. Shunran also stated that Ginta was always that one guy who was both charming and courageous and always wanted what was best for her, thus doing everything in his power to treat her with respect and allegiance. Furthermore, Ayame and Shunran would deliver this particular home truth to both Ran and Cheza. Ayame once had a crush on Sesshoumaru when she was a child, while Shunran also used to admire Hakkaku and tended to go to her big brother Shuran for advice on boys. It was not until 10-year-old Ayame stated how she felt about 14-year-old Sesshoumaru that they did go out a couple of times, but they realised that they did not really know each other better than they thought. At least Sesshoumaru always believed that Ayame was meant for Inuyasha, given how many times the then 13-year-old Inuyasha would seek for Sesshoumaru’s consolation whenever Ayame was brought up. In 8-year-old Shunran’s side of the story, the then 13-year-old Shuran did try to set up a play date with the then 12-year-old Hakkaku. While Shunran thought Hakkaku was funny and charming, it was not the same with her time with Ginta. Nevertheless, Shuran and Hakkaku were very supportive of Ginta and Shunran being together. Ran and Cheza definitely learned a lot about Ayame’s and Shunran’s experiences with first love and realising the people they were meant for in terms of trust and being themselves. Ayame and Shunran reminded both Ran and Cheza that they were smart, capable, and clever girls with so much to give to the world, and they would always support them no matter what decision they made. By the time Ran hit 14 and Cheza hit 13, they finally had the gumption to admit their feelings to Ichise and Kiba. In response, Ichise and Kiba would state to Ran and Cheza that there was nobody in this world they would trust than them, thus affirming their relationship and making Ayame and Cheza proud of their sisters from other mothers. Even when it came to relationships, they always made sure to have each others’ backs.

As adults throughout their 20s to 30s, Ayame, Shunran, Ran, and Cheza had always dealt with the challenges of being wives to Inuyasha, Ginta, Ichise, and Kiba and mothers to their children with open arms, which they continue to be grateful for, considering that they have become godmothers to each others’ children. Nevertheless, their sense of agency would never be diminished because they would always exude courage and compassion in and out of battle as well as with the people they are with on a daily basis. Ayame continues to be a valiant, strong, capable, and cunning warrior queen who is always ready to defend the oppressed and disenfranchised and can always send a huge punch and kick to every enemy who dares objectify her, let alone insult her. Shunran continues to be a fun-loving, mischievous, gregarious, and appreciative illusionist who can pull cunning tricks on her enemies to the best of her abilities and can exude great support to all of her friends and family. Ran continues to be a clever, articulate, composed, and taciturn healer who does her best to treat anybody’s and everybody’s wounds with medical knowledge and spiritual understanding, thus exuding compassion to those who are down-trodden. Cheza continues to be a kind, compassionate, nurturing, and sweet soul who protects the environment and heals internal and external wounds. Physically speaking, what has brought Ayame, Shunran, Ran, and Cheza as fighters has always been their penchant for Shaolin Kung Fu, Capoeira, Bajinquan, and Wushu because these martial arts have taught them discipline, focus, and the importance of protecting their loved ones from harm. Whether Ayame implements the fierceness of Shaolin Kung Fu, Shunran puts the strong mobility of Capoeira to fantastic use, Ran grabs the opportunity to incorporate Bajinquan’s accuracy when she defends herself, Cheza utilises Wushu’s flowing grace with all that she has got or all the above, these ladies can always prove to their foes that they are never to be underestimated. It has even gotten to the point where Ayame’s, Shunran’s, Ran’s, and Cheza’s daughters want to be as formidable as their mothers when it comes to defending themselves, and their mothers would always remind them that they should use the martial arts in a responsible manner. Furthermore, Ayame’s and Shunran’s nieces; including Rin, Shiori, Moegi, Satsuki, Kanna, Souten, and Ai; have always been inspired by their aunts to be just as formidable Kung Fu practitioners as they are. Not only have Ayame, Shunran, Ran, and Cheza set great examples on each other, but also their children, especially their daughters and their nieces.

Ayame, Shunran, Ran, and Cheza were, are, and all always be sisters for life. The solidarity they have for each other as fellow women and the unconditional love, support, and trust they demonstrate transcend mere friendship and elevate to the undeniable sisterhood that has defined them for many years. Challenges may come their way, but they will always overcome them with all of their might thanks to how deep and strong their sisterly bond is.

I hope you all enjoyed this, and I will see you in the next submission. Take care, stay safe, and keep on showing your love for Ayame, Shunran, Ran, and Cheza as sisters from other mothers, everybody.

Ayame and Shunran from Inuyasha belong to Rumiko Takahashi and Sunrise.

Cheza from Wolf’s Rain belongs to Keiko Nobumoto and BONES. 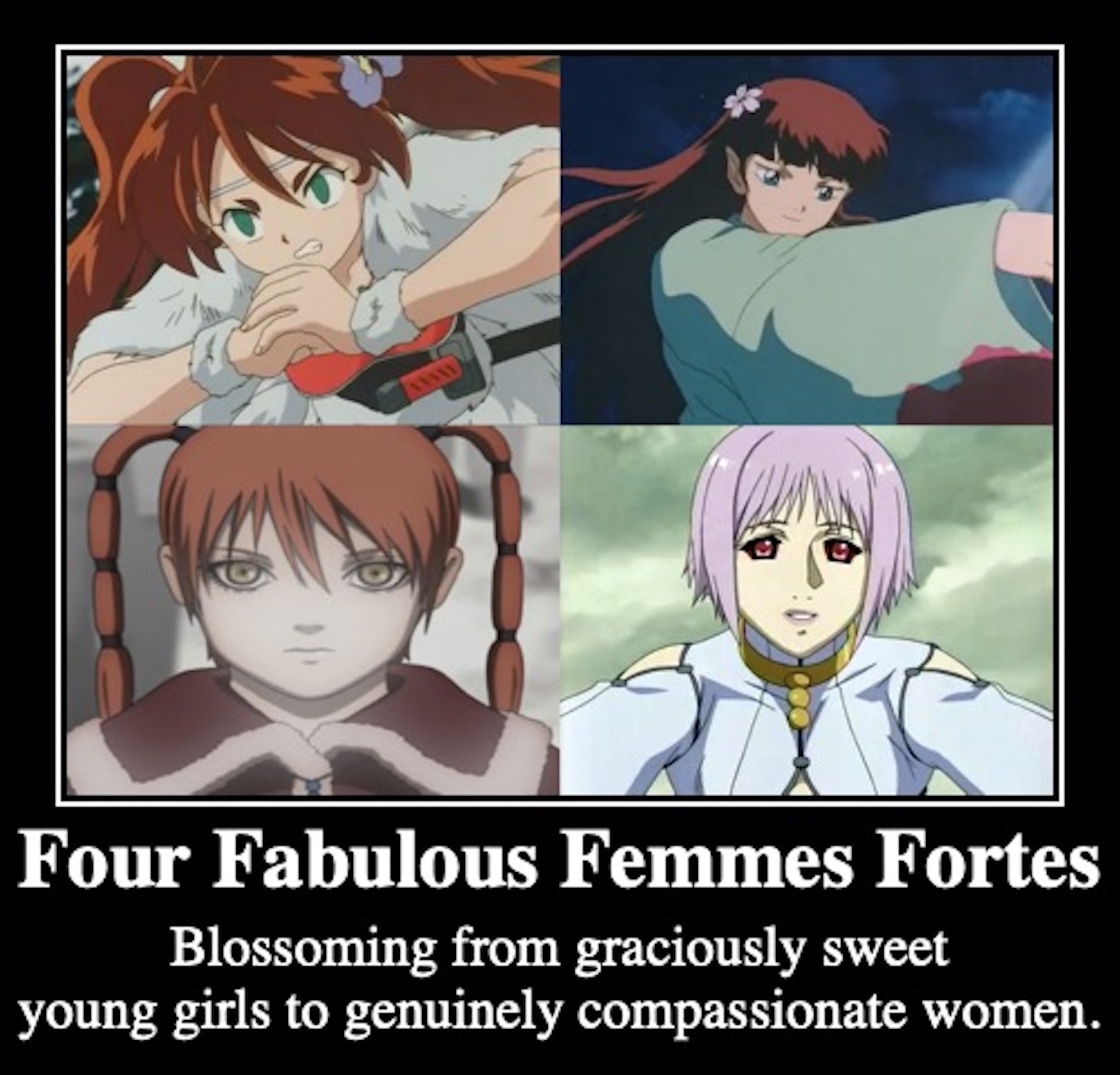