This I Ship Meme originally belongs to adamhatson and is dedicated to all of the wonderful Kid Flash x Jinx or Kid Flinx shippers, partisans, and loyalists of the world. Sit back, relax, and soak in the beauty of how opposites can attract in the most gorgeous way possible, especially if you are Kid Flash and Jinx.

Much like several Teen Titans 2003 partisans, I never expected Kid Flash and Jinx to become an item by the end of “Lightspeed” and during “Titans Together Part 2”. I remember tuning into “Lightspeed” when I was a 14-year-old about to end my tenure as a middle-school student and about to approach my first year of high school. I never saw Jinx as the romantic type, despite her having a crush on Cyborg disguised as Stone, but I always figured that Cyborg was much better off with Sarasim and Jinx with somebody else. As Kid Flash revved up to the small screen with his affable charm, down-to-earth personality, and natural likability, especially emphasised by his heart-to-heart conversations with Jinx, I felt a spark that made me believe that these two were great for each other. While Jinx usually presented herself as cold, calculating, catty, and crafty, Kid Flash’s debut episode showed that Jinx can be caught off-guard when she least expected to and has moments of vulnerability hiding behind that dark atmosphere she gives off. This vulnerability comes in full display when Madame Rouge unfairly berates Jinx after she captured Kid Flash, thus planting the seeds of Jinx realising that the side of villainy is not where her destiny lies. Jinx may have endured a change of heart in her appearance on “Titans Together Part 2”, but her relationship with Kid Flash is more deeply explored in the comics that serve as a tie-in to Teen Titans 2003. Although I would have loved to see how Kid Flash’s and Jinx’s developed in the television show, specifically in the show’s planned sixth season, I am still thankful to appreciate what Kid Flash and Jinx as a couple is defined by, which is looking past the surface and having the courage to understand each other on a more profound level.

Sometimes grand romantic gestures of love and romance can easily come off as tawdry, hackneyed, and myopic melodrama for the sake of bringing two characters together. Kid Flash and Jinx avoid coming off as melodramatic by being down-to-earth in terms of how they react to each other and how they acknowledge each other as individuals. Kid Flash eschews any hopeless sentimentalism and is very willing to be his naturally gregarious self towards everybody he meets because he is a naturally good-hearted person without any bad blood against anybody even against his enemies. Jinx may have built up a persona where she comes off as cold and cruel, but Teen Titans 2003 demonstrates that there is a lot more to her than meets the eye. She has charisma, is outspoken, and is very upfront about her tastes in fashion, specifically the ones that suit her identity, all while being a capable strategist who combines supernatural magic with physical combat capability. “Lightspeed” demonstrates how much Kid Flash understands the position Jinx has always found herself in with her Hive 5 teammates who she has formed a familial relationship with for an indefinite amount of time. He empathises with her situation when it comes to feeling like she is the only one making sense, while her teammates seem to go off in different directions. Furthermore, Kid Flash even challenges Jinx’s notion of who she thinks she is behind the dark magic, the snide sarcasm, and the claim that all she brings is misfortune, thus using this curse to her advantage. His argument towards Jinx is that she may be capable of bringing misfortune, but she can transform that curse into a blessing that can be beneficial not always to herself but to the world. Therefore, to quote a slogan that has been imprinted during Avatar: The Last Airbender’s run, everybody is capable of great good and great evil, which is what Jinx is and which is what Kid Flash not only understands about her but about people in general. Ever since “Lightspeed”, Jinx has understood that the life of villainy has left her empty, disappointed, and somewhat unfulfilled. I even argue that she felt like she always had to take care of her brothers from other mothers without them returning the favour. Kid Flash would understand that Jinx is somebody who needs to be listened to and acknowledged not always for her powers but who she is on the inside. Jinx may have tried to deny it, but Kid Flash was, is, and will always be that person who sees both sides of Jinx: the calculating sorceress who brings bad luck to those who wronged her and the charismatic girl who is unafraid to make bold decisions in everything she does. Kid Flash and Jinx as a couple is a strong reminder of how both parties can bring out the best in each other.

With a high degree of understanding, compassion, and warmth between the then 16-year-old Kid Flash and the then 14-year-old Jinx, it would be no surprise that their relationship would end up being promoted to the next level. Not only would they continue to build trust during their dating years, but also when it comes to being engaged and eventually being married and starting a family of their own. The 18-year-old Kid Flash and the 16-year-old Jinx would end up being married one Halloween in 2005 because they would both consider it an unusually nice holiday to get married, and it is, of course, what both of them want. Now with Kid Flash approaching 35 and Jinx approaching 33, they are the proud parents of 16 going on 17-year-old triplet sons Hermes, Helios, and Hylas; 15 going on 16-year-old twin sons Icarus and Iopas; 14 going on 15-year-old twin sons Janus and Jason; 13 going on 14-year-old triplet daughters Calliope, Cassandra, and Chrysothemis; 12 going on 13-year-old twin daughters Vivian and Vanessa; and 11 going on 12-year-old twin daughters Portia and Penelope. Both of them thought it would nice to choose names based on mythology and literature because this was a past time they enjoyed when they were not going out saving the world. Kid Flash’s and Jinx’s naming conventions aside, their sons have grown up to be athletic marathon runners who know how to make healing spells whenever anybody is injured, and their daughters have grown up to be intellectuals when it came to casting spells based on bad luck and good luck while conjuring illusions that can leave their enemies in a huge state of confusion. All of them would have a feisty streak about them, thus combining their father’s gregariousness and their mother’s snide. Kid Flash’s and Jinx’s children would be indubitably well-rounded, and their family would be based on imprinting that everybody is capable of great good and great evil, but it is up to them where they want to go with their lives. Understanding how their mother’s former life as a villain was unfulfilling, they would realise that they would rather stick to the side of good once and for all. At least both Kid Flash and Jinx know that their children have made the right decision.

Kid Flash and Jinx are a charming couple based on how well-rounded, flexible, and resolute they really are. They have sufficient courage to change the world around them and will not let anything faze them. Furthermore, they prove themselves to be vivacious in their own way, thus highlighting that there is no boring moment between them.

I hope you all enjoyed this, and I will see you in the next submission. Take care, stay safe, and let your love for Kid Flash and Jinx as a couple run as quickly as a gazelle and soar as high as an hawk, everybody. 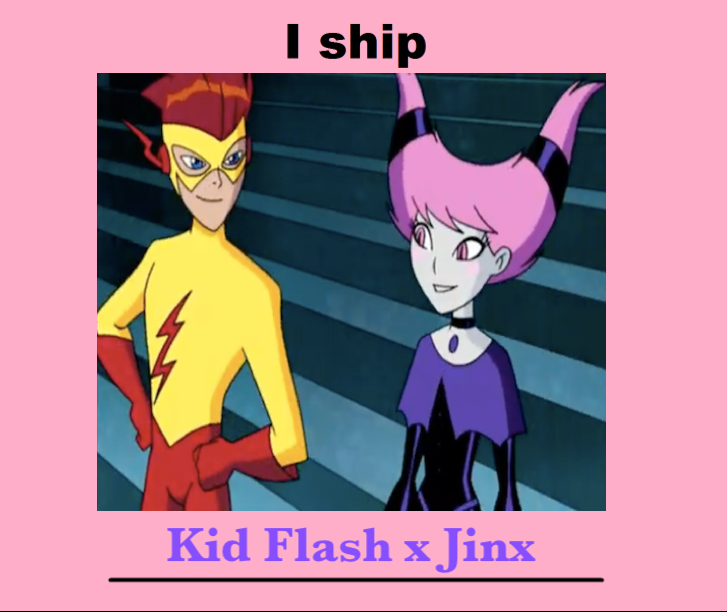